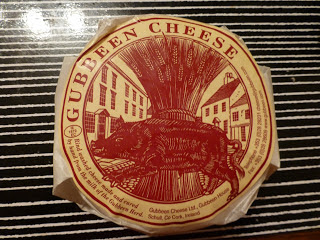 Gubbeen is one of the original Irish cheeses and one of the very best. It is made in West Cork from the milk of Tom and Giana Ferguson’s mixed herd of cows and is a firm rind washed cheese; the cheese itself is softer than the rind though it has a real bounce.

It is widely available and I got my most recent wedge, our Taste of the Week, from the Cinnamon Cottage on the Rochestown Road in Cork.

The Fergusons make just one type of cheese and the variations are down to age and smoking. Well, what does it taste like? At the younger stage, it is milky, creamy even, and is mildly pungent. That changes as it gets more mature so the best thing is to try it at different stages, perhaps at a Gubbeen stall in a Farmers Market, and see which suits you best.

Much the same can be said about the smoked version, done in the Gubbeen smokehouse by son Fingal. Again, the youthful version is mild while the mature has a stronger flavour. Some people like the younger cheese, others prefer the mature. Over to you. You may well like both, as I do.