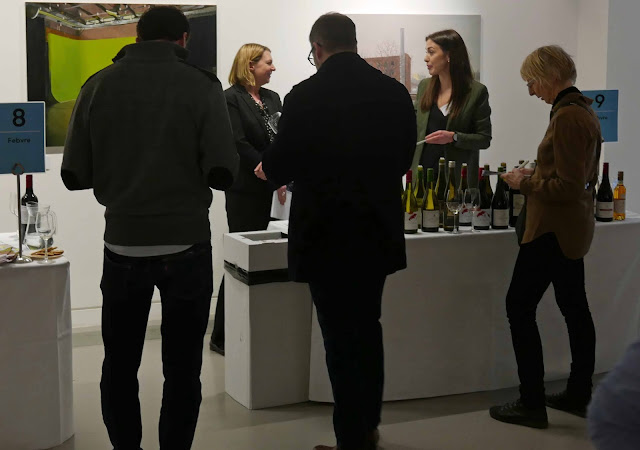 I was determined to concentrate on the Focus Table, this year featuring a selection of 31 wines by Irish wine personalities who have a keen interest in Australia, including Liam Campbell, Martin Moran, Harriet Tindal, Colm McCan (Ballymaloe) and Gavin Ryan (Black Pig, Kinsale). The figure was supposed to be 24 wines but it did get extended.


It included three sweet wines so I had to be patient, working my way through the white and the red before getting my hands on them. The d’Arenberg ‘Nostalgia Rare’, a McLaren Vale Tawny, more tawny port style than ruby, according to Liam Campbell’s note, was delicious. McCan’s choice, the Skillogalee ‘Liqueur’ Clare Valley Muscat NV, from Dave and Diane Palmer, poured slowly from the stubby bottle, a sweet stream, sweet but with balance.

And it was the Pfeiffer Wines Rutherglen Muscat NV, a Martin Moran pick, with its heady complexity and orange notes that was my favourite of the trio.

And there were more from the Rutherglen area at the Liberty Wine table, sipped as we chatted with Gerry Gunnigan and new recruit Marcus Gates. First up was the Chambers Rosewood Muscat à Petits Grains Rouge NV (€18.99) and the direct comparison was with the ‘Old Vine’ Rutherglen Muscat à Petits (34.99).

The first is unctuous and rich, yet balanced. The ‘Old Vine’ , with orange, raisin and floral aromas, and a concentration of riches on the amazing palate, and again that balance. Both delicious but, if feeling flush, go for the Old Vine which has had the benefit of going through their specific Solera System.

Back then to visit Chris and Robyn Pfeiffer at their stand and, first to try their Topaque Rutherglen Muscadelle NV (previously called Tokay). “This is 100% Moscatel. It is well ripened. There is plenty of accumulated sugar but we don't lose the fruit.” And this luscious flavour-full wine is another stickie gem.

On a previous visit to Cork, Chris revealed that the table wines “pay” for the fortified wines which are regarded as “an accountant’s nightmare, because they tie up so much capital”. Fortunately, thanks to people like Chris, the accountants don't always have their way. “Fortified wines are undervalued...they deliver great punch for your pound!”

And, on that occasion, at The Hayfield Manor, I had the pleasure of sampling the even rarer Pfeiffer Grand Muscat. It is twenty years old and has spent most of that time in barrel. “It is a very special occasion wine (like old Cognac). It is very complex and you don't need much.”

That left me wishing for a tasting of their Rare Muscat, four years older than the Grand. “Like to get a  sip or two of that sometime”, I said to myself that night. And it finally happened in the RHA when Robyn produced a bottle and we drank the amazing wine, clinking our glasses in honour of the departed Joe Karwig, the wine-person’s wine-person who left us too soon (in late 2015). A fitting end to my stickie excursion at the Australia Day Tasting.

See also: A general review of the Australian tasting, with emphasis on Irish Focus Table