I was determined to concentrate on the Focus Table, this year featuring a selection of 31 wines by Irish wine personalities who have a keen interest in Australia, including Liam Campbell, Martin Moran, Harriet Tindal, Colm McCan (Ballymaloe) and Gavin Ryan (Black Pig, Kinsale). The figure was supposed to be 24 wines but it did get extended!

Laura Jewell MW, Wine Australia Head of Market EMEA, said:  We hope this new section adds an extra dimension to this year’s event. Having looked at the nominations, these wines really do highlight the diversity of Australian wine and reinforce the country’s reputation as a premium wine producer.” 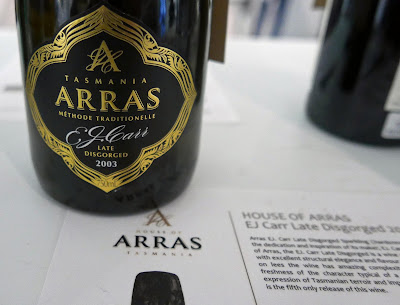 The promise, and it was kept, was that “great classic wines from the likes of Cullen, Clonakilla and Bindi will be on show, plus new-wave artisans like Jauma, Ochota Barrels and Gentle Folk”.

So the signs were good as I arrived at the Royal Hibernian Academy and sought out the Focus Table. And I made a sparkling start with the House of Arras ‘EJ Carr Late Disgorged’ Tasmania Chardonnay Pinot Noir 2003. Fresh and vibrant, an amazing sparkling wine.

Then followed a string of young Rieslings, including the Josef Chromy ‘SGR’ Tasmania Riesling 2016 with an ABV of just 7.5% and a delicious Skillogalee Clare Valley 2015 by Dave Palmer, “mineral, dry and crisp” as noted by Gavin Ryan from Kinsale’s Black Pig who selected it. 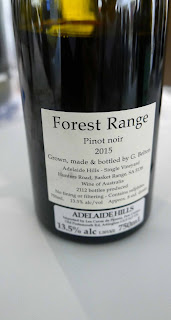 The Tyrrell’s Vat 1 Hunter Valley Semillon 2011  was superb, “intense and complex, but elegant and refreshing” noted Martin Moran. It was all good around here and the standard was maintained by the Bird in Hand Adelaide Hills Grüner Veltliner, the grapes picked in the cold of the night to retain flavour and freshness.

Maximum drinkability and enjoyment is the aim of the producers of the Gentle Folk Forest Range Adelaide Hills Pinot Noir 2015, the first of the reds and the first of Ballymaloe's Colm McCan’s selections for the table. I reckon the producers got it right as did Colm.

There were quite a few Syrah and Shiraz at this point, all very good including the Payton and Jones ‘Major Kong - Planet of the Grapes’, Yarra Valley 2015. My favourite though was the blend: De Bortoli ‘La Boheme Act Four’ Yarra Valley Syrah Gamay, imported by Febvre and a Liam Campbell pick. 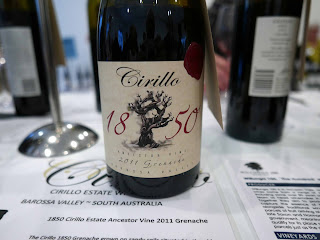 Some excellent Grenache on the table too including Ochota Barrels ‘The Fugazi Vineyard’ McLaren Vale 2015, the Willunga 100 McLaren Vale 2015, and the Cirillo ‘1850 Ancestor Wine’ Barossa Valley 2011. The Cirillo was chosen by Ian Brosnan of Ely and he admitted that, until recently, he had never tasted Grenache of this quality.

And quality too, at a very good price, in Kevin O’Brien’s Kangarilla Road Terzetto, a McLaren Vale blend of Sangiovese, Primitivo and Nebbiolo. It is a favourite of mine, was chosen by Liam Campbell and is available at O’Brien Wines. 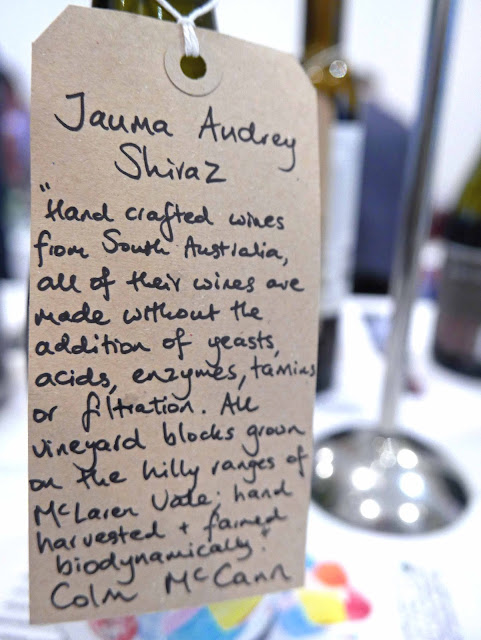 Perhaps the best blend of the lot came towards the end: the Cullen ‘Diana Madeline’ Margaret River Cabernet Blend 2014, imported by Liberty Wines and nominated by Gavin Ryan who has fond memories of enjoying it at a full moon harvest party in Margaret River.

Time then for a chat at the Liberty Wines stand with Garry Gunnigan and new recruit Marcus Gates and a tasting of their sweet wines before heading into the general wine area.

Here we soon met up with Jonny Callan of Cabroso Wines who import the Kelly’s Patch range to Ireland and we hope to link up in Cork soon and find out more about the company. 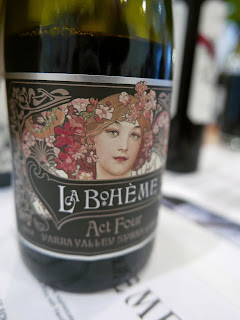 Having concentrated on the Focus Table we missed out on many stalls, including McGuigan where they were tasting the impressive Founder’s Series that I enjoyed in Kinsale a few months ago.

Hard to go wrong with the Deakin Estate and Katnook Wines that are imported by Findlater (and available in Cork in Bradley's and other outlets).

Been writing this and wondering how the Australians get to name their wines. Heard a good story from Michael at the Lanchester Wines stand as we sampled the excellent ‘Don’t Tell Gary’, a McPherson Shiraz 2015 from the Strathbogie Ranges.

This wine is a labour of love - one the accountants didn't know about.  In 2014, winemaker Jo Nash discovered an exceptional parcel of Shiraz from the Grampians which she gently crushed, then tucked away in some ridiculously expensive French oak barrels to age for 12 months.

All the while, she was urging her fellow employees: “Don’t tell Gary”. No one did tell Gary, her boss. Now the wine speaks for itself - minimal intervention, purity of fruit, Shiraz at its best and Jo has been given free rein to investigate other possibilities in the vineyard!
See also earlier article on great selection of fortified sweet wines at the tasting here. 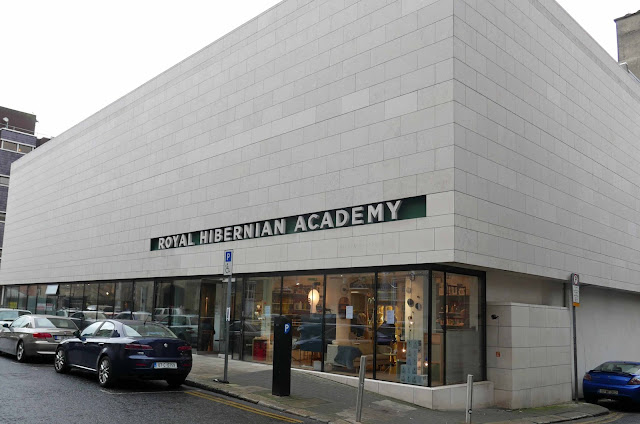