An amazing series of tapas style dishes, prepared by hosts Club Brasserie, heralded the start of the 2017 season for the Munster Wine and Dine Circle. Each dish was accompanied by news of an event already confirmed in the calendar for this local group, who love their food and drink and love also promoting local produce. 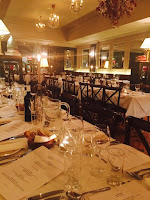 After a welcome prosecco, thanks to Gary O’Donovan, we had a short and interesting presentation by Cal McCarthy, Senior Sales Manager at Clonakilty Black Pudding. He told us the success of the company was down to the passion of the people involved, especially founders Eddie (RIP) and Collette. “It is available in the UK, Australia, the United Arab Emirates… we must be doing something right.” And he also told us about the right way to cook it: “..on its own, in the oven”. By the way, they also do gluten free black and white pudding and sausages.
Beth and Harold and their staff in the Club Brasserie then began their superb service, starting with that iconic black pudding and Beth confirmed the tasty dish was indeed cooked in the oven. New committee member Stuart Musgrave then outlined the first event. In March, a group will visit Barry’s Tea, another iconic Cork producer, and the “best tea blender on the world” according to one time rival Stewert.

By now, another dish had arrived from the busy kitchen, a presentation of mushrooms from the folks at Ballyhoura and mixed in were some of their new smoked oyster and shiitake, “very tasty” according to Beth. MWD secretary Beverley Mathews was then on her feet, outlining the April event. “This will give you the chance to stand in the shoes of a large scale wine buyer.” Supervalu's top buyer, Kevin OCallaghan, will be present for a tasting of some of their wines in L’Atitude in what should be a fun evening.

I’m not sure that there was an event for every dish and we were on to the mussels when chairperson Eithne Barry enthused about the next event, a May trip to Kinsale. She fleshed it out. A bus from the City Hall with the first stop at Black’s Brewery in Kinsale for craft beer and gin. Next stop at The Spaniard for a glass (of water?!). And finally, dinner at Man Friday, a dinner to be cooked by the younger generation in the long-established restaurant!

Soon Eithne was telling us about the summer’s premium event, a day out in West Cork. The bus will take us direct to Gubbeen where our hosts will be Fingal and his sister Clovis. Fingal will give a tour of the farm, telling us all about the cheese, about his very special smokehouse (where he produces the most divine Chorizo and Salami and more) and about his knife-making for which he is rather well-known. Over then to Clovis who will feed us all as the July evening unfolds.

Speaking of premium, Harold and Beth brought out a very special dish, their lovely East Cork Lamb, with their own harissa oil and spiced chickpea, small and beautiful. Speaking of East Cork, one of the earlier plates featured Ardsallagh goats cheese.

The MWD speaker now was yours truly and my task, on Saturday September 15th, is to take a group on a short walk, focussing on the Coal Quay and Shandon, areas long associated with Cork food. Back down to the city centre then for a late leisurely lunch in Jacques where no doubt there will be a reminder, maybe even a replica, of a dish from the good old days (but we'll leave the details up to the Barrys!).

West Cork Crab was now on the menu, served with a lime chilli mayonnaise. And MWD treasurer Richard Scott took the floor to highlight the final event of the year on the 3rd Sunday of November. Lunchtime visits to Longueville House (2015) and to Ballyvolane House (2016) have proved highly successful. If it works, why change it., So this year, we are off to the Long Room in Ballymaloe where fifty happy visitors will be seated. Before the lunch, a local producer or two will be on hand to give a  presentation.

Looks like a great finalé to what should be a varied and entertaining programme.

* The membership list is very close to its upper limit. If you are interested, please email mwdcircle@gmail.com. Fees are €30.00 single, €50.00 double.