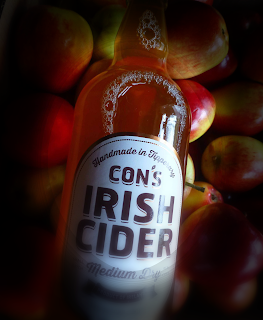 If you haven’t tasted real Irish cider before, you're in for a treat. This is packed with flavour and it just waiting to get out of the bottle and impress. Your palate will initially be overwhelmed - after all, 85% (maybe more) of the content is apple. You soon get used to it and begin to enjoy the genuine taste of an Irish orchard.

Made in Cahir (County Tipperary) by Con Traas, from his own apples, this cloudy small batch cider is a great example of the craft. Taste of the Week, any week.


That initial burst in the mouth reminded me instantly of something Brooklyn brewer Garrett Oliver said at Ballymaloe LitFest earlier in the year: “You hear people say, when they taste a craft beer: This is nice, doesn't taste like beer." He had an explanation: ‘The beer they grew up with didn't taste like real beer!’”
Apple Farm Cider Con Traas Con's Irish Cider craft cider Irish Real Cider