Go easy on the dough. Don’t beat the shit out of it.
That was the advice from founder and owner Declan Ryan as he welcomed a group from the UCC Fermentation Society to his Mayfield bakery, Arbutus Bread, this week. He recalled various enthusiastic people hammering the dough all over the place but gentleness is the answer. Apparently Jamie Oliver was one of those overly eager bakers, not in Mayfield though. But he took the advice and said that not only did his bread-making skills improve but so too did his love-making.

Declan has been in love with bread-making for a long time, even when he was scaling the heights of cuisine back in the day when the family’s Arbutus Hotel was the place to eat in Cork. And not just for locals, particularly after Declan was awarded Ireland's first ever Michelin star.
But then things changed for Declan. The old enthusiasm wasn't here any longer. “I got burned out…. was tired as a chef.” Retirement, he knew, wouldn't suit him and so,  he turned to his hobby which was baking. 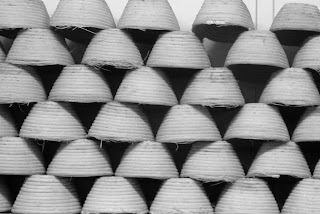 And he began Arbutus Bread in his converted two car garage, making the deliveries himself by jeep. Now an new enthusiasm fermented and he learned more about the trade and the art from some of the very best. He tracked down a course in France and here his two tutors were two of the top bakers in France, Pierre Nury and Xavier Honorin “who were inspirational in their enthusiasm”.

You may read more about the early days of Arbutus Bread here.

Declan met us himself and showed us some early vessels associated with bread, one of a type used in the time of the Pharaohs. Spelt was the grain used at that period. Then he showed us a Greek urn from 340 BC and by now the bakers were using wheat. He had a trio of harvest masks on display including a very impressive one from Nigeria.


Arbutus breads are based on the French artisan tradition and he uses a French wheat Bagatelle Red Label La Farine Type 65, no less than four tonnes a week to produce 2,000 to 3,000 loaves a day! You may see the full list of their breads here.
That two car garage has long been left behind. Indeed, five years after its founding, Arbutus moved to the current premises in Mayfield and, just a couple of years back, they doubled the space but stayed in the same site. Now they have 17 employees, spread across five nationalities.


While Declan’s ingredients are limited to the traditional three or four (unlike the multiples of that seen on many commercially made breads), there are other factors that are critical to the production. One is temperature and here you have to bring all the elements to an average of 23 degrees for the dough mix. Salt too is critical, not just for taste but “for structure”.
And then there's the butter story. Arbutus do produce some sweet things, eg Brioche but especially croissants. You need butter for the latter, a special “dry” butter. Kerrygold produce it but it is not available here. It is exported to France by the container load. Then it is bought by various companies over there. One is Elle & Vire. They package it nicely, with the Eiffel Tour and the French tricolour prominent and sell it in France and some of it finds its way back to Dublin where Declan purchases it for his croissants!


And the determination that only top notch ingredients be used for Arbutus Bread is further underlined in their Pain aux Chocolat. Many would settle for ordinary chocolate but only the best, Valrhona, will do for Declan.


As the tour drew to a close, he found time to hand out great praise to a hero of his, Donal Creedon of Macroom Mills, an outstanding producer and "one of a kind". And credit also to his grandmother. The Arbutus Soda Bread recipe (with only slight alteration) came from her. And then it was time to tuck into tea, breads and some sweet stuff that he had lined up for us.
A big thank you to the UCC Fermentation Society for the invite. Other recent Society events included a Tasting Quiz, a wine basics trip to L’Atitude 51, and a visit to Rising Sons Brewery. For future events check out their Facebook page here. 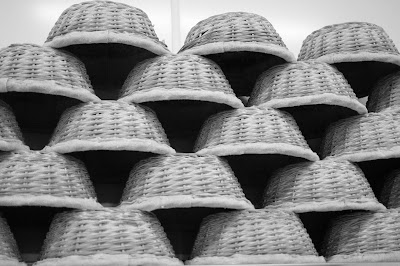