November 19, 2015
Lustau Dinner at Ballymaloe
Sherry with every course. Of Course!


Jerez came to Ballymaloe on Wednesday night and Lustau oenologist, Manolo Lozano, who has been named “Best Fortified Winemaker of the Year seven years in a row by the International Wine Challenge of London” brought some delicious wines with him and they were well matched by Ballymaloe chef Scott Walsh.


Manolo, accompanied by friend and translator Paco Lozano (unrelated), was here to visit Irish Distillers in nearby Midleton and the dinner at Ballymaloe celebrated the links between the two companies. The distillery was well represented with Kevin O'Gorman, Master of Maturation; Billy Leighton Master Blender; and Ger Buckley, Master Cooper, among the diners.

The Spanish visitors gave us a brief introduction to their sherries. Manolo: “Jerez is one of the oldest wine regions in Spain… just three varieties are used, Palomino, Moscatel and Pedro Ximenez…. we used the solera system, a dynamic system, to get the characteristics we want… there are no yearly vintages….” To read all about Lustao, including the methods of production, click here.

There are different types of aging for the dry and for the sweet and the casks used are made from either Spanish or American oak with a capacity of five to six hundred litres. We had Fino Jarana both as aperitif and as a match for the first course: Toasted Almonds, Wild Watercress and Honey Salad.

Manolo explained the flor, the “veil of yeast” that covers the young wine in a biological process (see diagram below). Hence the pale colour, the salty nose with hints of yeast. “It is elegant, with nutty (almond) elements”. Chef Walsh had gathered his watercress and had a good word to say about the recent storm Barney: “It is a great time to gather watercress, the storm increased the water flow and enhanced its peppery flavour. A sprinkle of sea salt clinched it”. A perfect match indeed.

Then we were on to the Amontillado Los Arcos, a darker sherry. This is raised first under flor and then after the addition of higher alcohol has killed off the flor, the second maturation begins. Colour is amber and while the palate “reminds of Fino, the nutty flavour is no longer that of almond”. The chef had a big challenge here in trying to do it justice. So he used cured farm pork and the fat in the smoked meat “made the match”. The full title: Ballymaloe Kasler, white bean and Parsley tostado.

The first two sherries were dry,  under 5 grams per litre, and so was the third, the mahogany coloured Oloroso Don Nuno, “raised in the same casks that Irish Distillers now have!” Alcohol here is 20 per cent. The wine here has been selected from the start to be Oloroso so there is no flor at all. All three start “very plain. Then we develop what we want. It is a very good wine, a strong wine for red meat, for game. Hard to match!”
Scott came up with the answer, even if there are now “no cow tails left in Midleton”. “There’s a lot of meat on a cow, “ he said. “But just one tail!”. The dish was Braised Ox Tail with Romanesco, tomato, lentils. And we believe that both red and white wine, even some brandy were also added. The chef was hoping the sherry would “cut the richness and the fat” and neither he nor we were disappointed. A superb pairing indeed.

Now we were onto the sweet Moscatel sherry (200 g of sugar per liter). “This is not allowed to ferment at all; alcohol is added immediately to allow natural sugar remain in the wine. Grapes are pressed, fermentation is stopped. The Pedro Ximenez grapes (450g), on the other hand, are “transformed” by sun-drying prior to pressing.


Before he and Paco sat down to enjoy their desserts, Manolo asked us to consider sherry in a new light. “Don't forget, sherry is a wine. It is very versatile and there is a style for every occasion.” They had indeed demonstrated exactly that.


The chef had come up with a divine Steamed Kumquat Pudding for the Moscatel Emilin while the PX San Emilio was paired with Ballymaloe Vanilla Ice-cream. The PX was supposed to be drizzled over the ice-cream but you know the Irish drizzle!

There was one further liquid treat in store for us, a glass of Redbreast 21 year old Single Pot Still Irish Whiskey. Master Blender at Midleton Distillery is Billy Leighton: “The Redbreast family is all based on whiskey raised in sherry casks. Paco and Manolo have been of tremendous help to us in Jerez. We get the best quality cases and that leads to the best quality whiskey”. 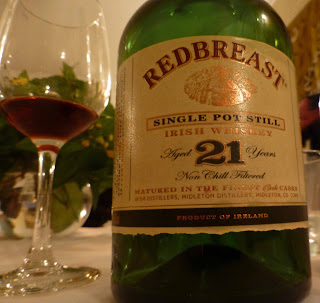 “There is a succulent fruitiness on the nose more so than on the 12 years old, a heavier style. Secret is to match the sherry flavours with the spicy whiskey, get that balance of fruitiness and spices. And that taste is full and silky, smooth and, even at 46% abv, it slips down nicely before the fruitiness slowly fades away and it drys out leaving the barley at the very end. Sláinte!”

And Sláinte indeed to everyone at Ballymaloe. A privilege to be there at Manolo's first ever sherry dinner in Ireland.