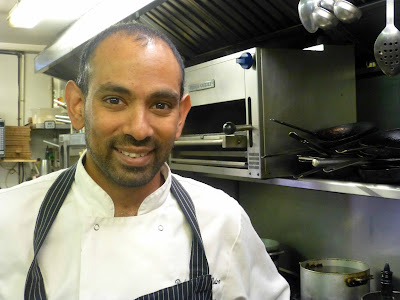 Richy Virahsawmy is something of a renaissance man. He is a restaurant owner, a cook, a teacher, a consultant, an active contributor to the local community in Clonakilty, a TV chef, an author, and a farmer. He has cooked for you and me, for celebrities (Michael Flatley), in big houses (Castle Hyde, Castlefreke), for large crowds (World Web Summit and at the National Ploughing Championship), for Prime Ministers and their guests (in Downing Street and in his native Mauritius).

I won’t go into all the details in this post but you may read all about his background here. The Irish leg of his career began when he joined the staff of Inchydoney Lodge and his dream of opening his own restaurant became reality in 2002 when Richy’s was established in Clonakilty.

And, ten years later, worried that a restaurant that only opened a few days week might not be enough on its own, he reinforced his position in the town with the opening of the adjoining cafe, turning the operation into a multi-functional one. Now he had two types of dining room in the one premises.

Now too he could really get to grips with expanding his teaching. Autumn/Winter Courses include fish cookery, Canapes and Small Bites, Slow Cookin, Sushi Making, Cooking for Friends are among those available. These are all interactive classes: you cook and, at the end of the evening, sit down with your fellow students and eat!

And Richy loves teaching children to cook and every week he has classes for a small group (eight to twelve) of kids with autism. Indeed, in an attempt to meet the threat of obesity, he plans to increase his work with schoolchildren and has earmarked an old house on his farm for that purpose, and more. Watch this space.


He, his Finnish wife Johanna, and their three children, live on the farm in nearby Rosscarbery in a cleverly converted barn! The farm is worked and they have established a market garden there with herbs, and greens, tomatoes and so on, grown for the restaurant. Richy finds it hard to understand why so many Irish farmers stopped doing this for themselves. Another bonus is that most of the restaurant waste is composted here. 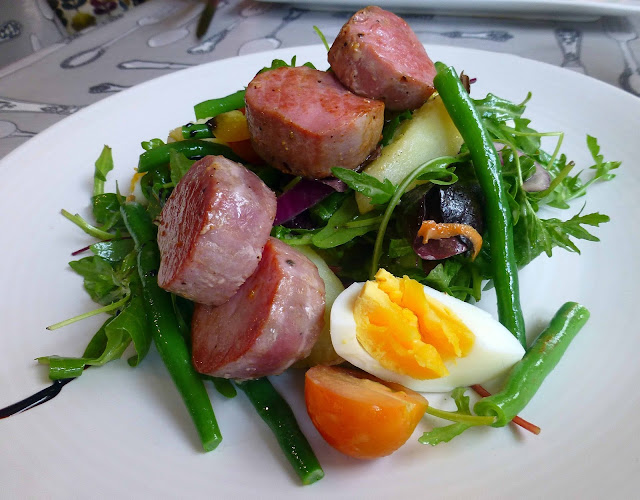 Back at the restaurant, it is all go. But not with the staff. He has a good team, twenty four strong, his chefs “stay longer”. The place, the flow of work, is tidy, highly organized, everything in its place.

“Ninety per cent is made in-house. You can't go much higher than that.” And the menus rarely stand still, always a few on the specials boards, He had taken an “office day”, on the day of our visit, to work on the Spring-Summer menus for 2016. A few years back, he introduced a pizza menu and that is going strongly.

When Richy started up in 2002, he knew he wouldn't have to go far for good produce. It is all around here in Clonakilty, in the fields of the local farms, and in the nearby seas. And he makes great use of it as we found out, again, last week. 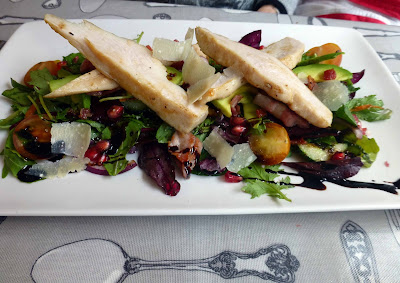 There were at least five specials on the board and I started with one of them: the West Cork Seafood Chowder, packed with little chunks of fish and a few mussels in their shells, a terrific chowder and a great starter on a cool enough day. Meanwhile, CL was warming up with the Buttersquash and Sweetcorn Soup.

Again, I found my mains on the Specials list: Tuna Nicoise Salad, boiled egg, anchovies and green beans. A superb combination of flavours (the meaty tuna and the salty anchovies), colours and textures (crunchy beans, soft eggs). And the salad, from the farm, was simply outstanding.

That well dressed salad also made an appearance in CL’s dish: Chicken, avocado and pomegranate salad, Gubbeen bacon, balsamic and extra virgin olive oil. Again, this was one to savour, take your time with, a pleasure to eat.

We would have loved a dessert and were tempted but settled for a cup of coffee, a chat with the man himself and a tour of the kitchen.