Clonakilty Chocolate. All my changes were there

October 22, 2015
Clonakilty Chocolate
All my changes were there 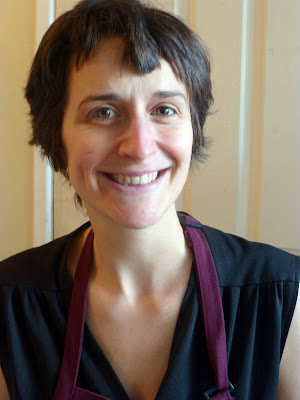 In Neil Young’s song “Helpless” you hear this line: All my changes were there. He was referring to his hometown in Ontario, Canada. Allison Roberts is also from Ontario and naturally enough had some moulding there.

One that would last came as a result of her following up an ad in a local shop window for a chocolate making course. That skill didn't bring her to Clonakilty but it was a major factor in her staying in West Cork where she now makes delicious Fairtrade chocolate in a room at the back of her house on a hill overlooking the town.

That early course saw the 12 year old invest in a set of moulds, including a turtle. And for “years and years, at Easter and at Christmas, I made mypocket money by making and selling chocolate”.

Growing up and attending university, she began to realise the negative impact of globalisation and was “always inclined” to Fairtrade. Years later, after traveling and stints living in Taiwan and Australia, she arrived in West Cork for “a six months stay”. 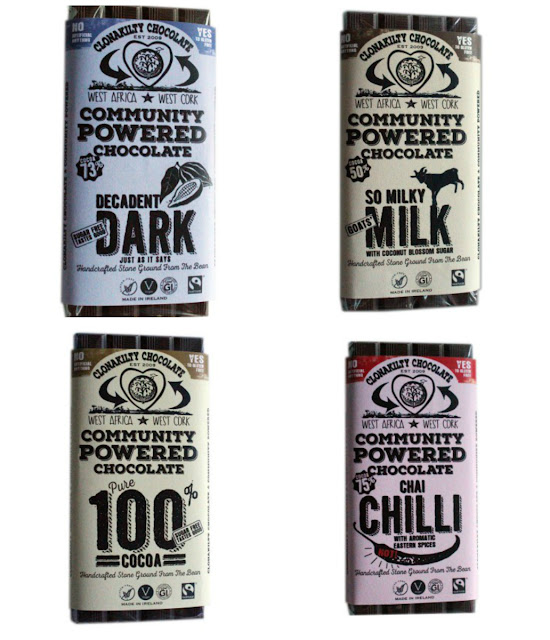 And, of course, one of the first things she saw were the signs on the way in to Clon declaring it to be Ireland's first Fairtrade town. It was a sign in more ways than one. And then there was another, more practical, sign that would lead to that six months going on and on. A local shop was looking for local chocolate. Allison sent home for the moulds, including that turtle, and went to work.

And there was yet another hook to the local community. An older lady recruited the Canadian to the Fairtrade Committee and now Allison is the group's treasurer. “There are lots of ways of doing Fairtrade,” she says. “Start by buying from the local farmers.”

“I like local but cocoa is faraway. Be aware of where your stuff comes from. All mine comes from Africa.” Indeed, it all comes from a group of farmers in Ghana, the Kuapa Kokoo Fairtrade Farming Co-operative. Allison visited there in 2013 as a representative of Fairtrade Ireland and you can read and see all about it here.

During our recent visit, we were nibbling away at all kinds of bits and pieces of chocolate as we spoke. “West Cork and the people in it have a magnetic energy, I soon realized I had found my home and in 2010, after seeking out local blessings, my traveling chocolate business was named Clonakilty Chocolate.” 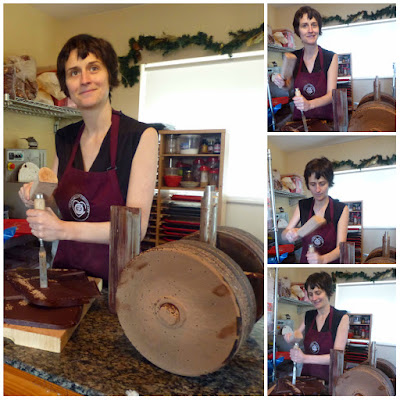 The chocolate is made in a large back room in the house that Allison and Justin share and where baby Ari is the most recent chocolate loving addition. He was very quiet during our visit and Allison said it's great to be able to work at home and keep an an eye on her son.

She has two employees now. Mondays, Tuesdays, and Wednesdays are production days. Thursdays are spent bagging and labelling while Fridays see her at the local market. If you visit Clon on a Friday, be sure and check out the market and you’ll see Allison and her bike which she uses both for transport and display.

You can buy the chocolates at the markets, in many shops in the town, in Cork city and in quite a few places around the country. See the full range of stockists here.

Allison would love to get her bars and treats into other markets but obviously can’t cover them all herself. So if you have a suitable established stall, perhaps selling other similar products, why not get in touch via the website contacts. If you’d like to buy and there is no stockist near you, then check out the online shop - it includes a Choco-Lovers Club! 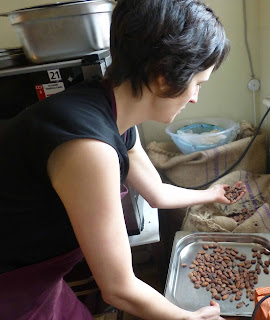 As well as the beans from Ghana, she also uses milk. She can get powdered cows milk in Ireland but has to import the goats milk equivalent from Holland.

The Goats Milk bar (So Milky Milk) is one of my favourites and I was surprised to hear her say that it is “controversial”, in the sense that people are either for it or against it. Luckily though, the majority love it! She is also “super delighted that the 100% bar pure Cocoa Bar is going really well, even if it's not the best seller”.

What is her own favorite? “That varies from time to time. At the moment it is the Chai.” She could well be selling a lot of these bars in the months ahead as “it is the Christmas one”.

And there was a Christmas feel as we left the chocolate house - we finished off with some of her fresh truffles. Gorgeous!