Chocolat is one of my favourite films and it is featured as part of the "culinary strand" in this year's Cork Film Festival, the 60th edition. This rather special showing will be in the Farmgate and other culinary highlight venues include Ballymaloe and Christchurch.

The opening element of the culinary strand this year will be the Fab Food Trail and will see twelve guests treated to some of the best produce Cork has to offer. An experienced and engaging guide will lead the way on this walking tour as the lucky few sample the finest foods from cheese mongers, fish mongers, butchers, bakers and more.

The event will culminate with a screening in the beautiful Triskel Christchurch of the Japanese film An (Red Bean Paste). An (2015) is directed by Naomi Kawase, and tells the story of a 76 year old woman, Tokue, who responds to an advert for a pastry kiosk. Initially reluctant to hire Tokue, the owner quickly realises he has struck gold when he tastes her beautiful red bean paste (An). Tokue strikes up a bond with a shy school girl, Wakana, who is a regular customer and the three prove to be a unique unit until they are suddenly split apart.More info here. 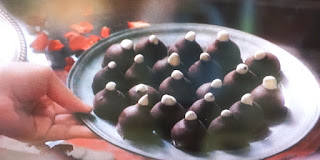 Following on from last year’s festival we will see the return of the hugely successful event in the Farmgate Café in Cork’s English Market. This year, the screening is the French classic Chocolat (2000) directed by Lasse Hallstrom. The film sees you drawn into the world of Vianne Rocher and her daughter Anouk as they open an artisan chocolate shop in a conservative French village.  Starring some of the best known names in the industry including Johnny Depp, Dame Judy Dench, Alfred Molina and Hugh O’Connor (who also has a film in the Festival this year).
This event is sure to be a treat. The menu will be a Chocolat inspired menu.
More info here.

An exciting addition to the culinary strand this year will be the inclusion of the Ballymaloe Grainstore event. This unique evening will see guests enjoy a fabulous meal in the classic Ballymaloe House followed by a screening of Some Like It Hot (1959) in the beautifully converted Grainstore. Some Like it Hot is a multi award winning comedy featuring performances from stars such as Marilyn Monroe, Tony Curtis and Jack Lemmon.

Set in 1929, we follow the exploits of Joe (Curtis) and Jerry (Lemon) as they create female identities to evade the Mob, skip town with a travelling band and vie for the affection of Sugar Kane (Monroe). Lose yourself in Wilder’s hilarious masterpiece in the truly exceptional setting of Ballymaloe Grainstore.