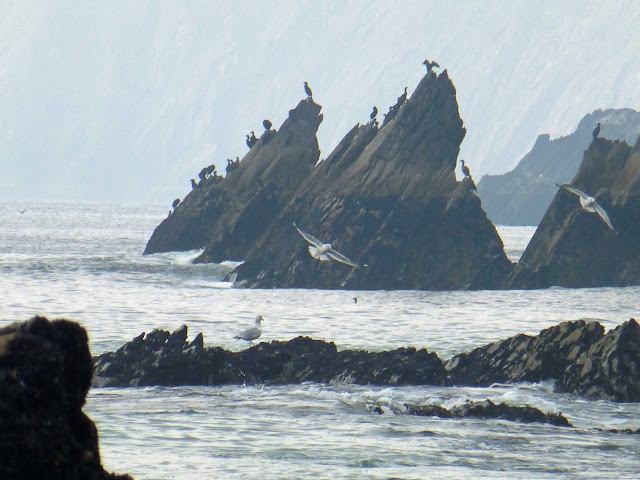 Dingle has it all - glorious food, drink and scenery. It is a terrific visit at anytime and can be visited whether the sun shines or not. Nature doesn't have to perform at its best just because you’re on a visit. Indeed, sometimes Nature in a bad mood is as well worth seeing as it is on the days of calm and balm.

I was there for the Blas na hEireann tastings and the annual food festival and it was a marvelous few days. Tough enough start though on the Thursday with a full day of tastings for Blas in the Skelligs Hotel. Tough? Did I hear you say? Well try tasting nine blue cheeses in a row. Or, in the final session of the day, sampling 15 beers as the sun went down.

But it has its rewards and the first came later that night in An Canteen when we sat down to a very local three course meal by the brothers Niall and Brian. Superb fish on the first two courses and those amazing savoury chocolates by Dovinia were a highlight. And I must also mention that excellent Connemara Pale Ale by the Independent Brewery.

Friday was largely a free day, so we headed west with the first stop at Ventry as the sunseekers were out in some numbers and, let me say, in their t-shirts. Also spent some time watching a group of kayakers getting ready and then sailing off into the haze. The weather had changed, duller and windier, by the time we got to Slea Head but we still got down to the sands and close to the rocks.

The Blasket Centre is a great place to visit to get a feel for the peninsula and the islands and , as a bonus, it is a good spot to stop for lunch. Fueled up, we carried on and came to Clogher Head. Last time, our walk up here was stopped by a heavy shower but there was no such problems on this occasion. Great views out there, even if there was a little haze in the mid-distance.

On then towards Ballyferriter and a visit to Wine Strand before closing the loop - the sun was out again -  and cutting cross-county back to Dingle. We were keen to see the Conor Pass while the weather was still reasonable. By the time we got up though, the clouds had taken over. Still we had a fine view down to Dingle and beyond.
Then an hour or two was spent at the awards by the Enterprise Office from the various counties (details here) and after that it was time to think about eating again. We were joined by some of the judges (lots of laughs with Susan and Judith Boyle) in the Global Village who came up with a terrific tasting menu, very popular too as empty plates went back every time. This was a selection of the peninsula’s finest produce over six tasting courses. Highlights were the fish (turbot, seaweed and fennel) and the meat (wild boar, scallop and raisins).

Saturday was a reasonably fine day and we were soon out and about after a good breakfast at the excellent and friendly Benners Hotel, so centrally located. Garvey’s SuperValu had their line of food already in place on the pavement outside. I had a look inside and was impressed. Outside, the market stalls on the various streets were busy and we called to quite a few.
Saturday though was mainly about the amazing Taste Trail and you may read all about that here. Caught up on the news from the award ceremony for Blas and delighted for the winners, particularly for those that we know. Taste trail or not, we were still up for a meal later that night and had booked in to the Grey’s Lane Bistro. It was a good call and a lovely meal.

Took it easy on the Sunday morning and, after yet another good breakfast in Benner's, two happy punters checked out and headed home. Dingle, we'll be back!