On The Bus Bia Tour


It is ten o’clock on an April Saturday morning and we’re on the Bus Bia, heading into the countryside north of Dungarvan. The Bus Bia (Food Bus) is just one element in a packed weekend of activities organised by the West Waterford Festival of Food. We’re on the Blackwater tour and there are two other tours to different areas.
In the sunshine, we pass the house of famous local chef Eunice Power and the memorial to the renowned racing greyhound Master McGrath. Soon we are in Cappoquin. For a while we follow the spectacular Blackwater River, its big houses Dromana and Camphire standing proud, before cutting off deeper into the countryside for the farming area known as Knockanore.


First call is to the Knockanore Cheese company where we are greeted by Donal. They have 120 cows milking here. The milk is left unpasteurized and none is bought in. He tells us they make cheese in six flavours. The most popular is their Smoked version though the Black Pepper Cheese is well up there as well. They smoke it themselves, two weeks with oak-wood.
It is a long day in the dairy, from about 6.30am to 4.30pm. They process over twelve hundred gallons three times a week, producing about 190 wheels a batch. Each wheel weighs 2.8 kilograms. The cheese is then stored for around six months before being sold on at home and abroad (including Denmark, California and New York).

They have grown the business gradually but now are in the throes of expanding their facilities at Knockanore, concentrating on more refrigeration and a bigger cutting area. Around six people are involved in the operation that was started in 1987 by Eamonn Lonergan who is still at the helm. The range is widely available and is stocked in SuperValu shops.

Baldwins are neighbours of the Lonergans and here we were greeted by Tom. Tom found himself with a conundrum in around 2005, whether to move from farming or whether to add on an enterprise to the existing farm which was being smoothly run by the family in any case. Inspired by Eamonn Lonergan he took a course in ice-cream making and started the Baldwin Ice-Cream business. 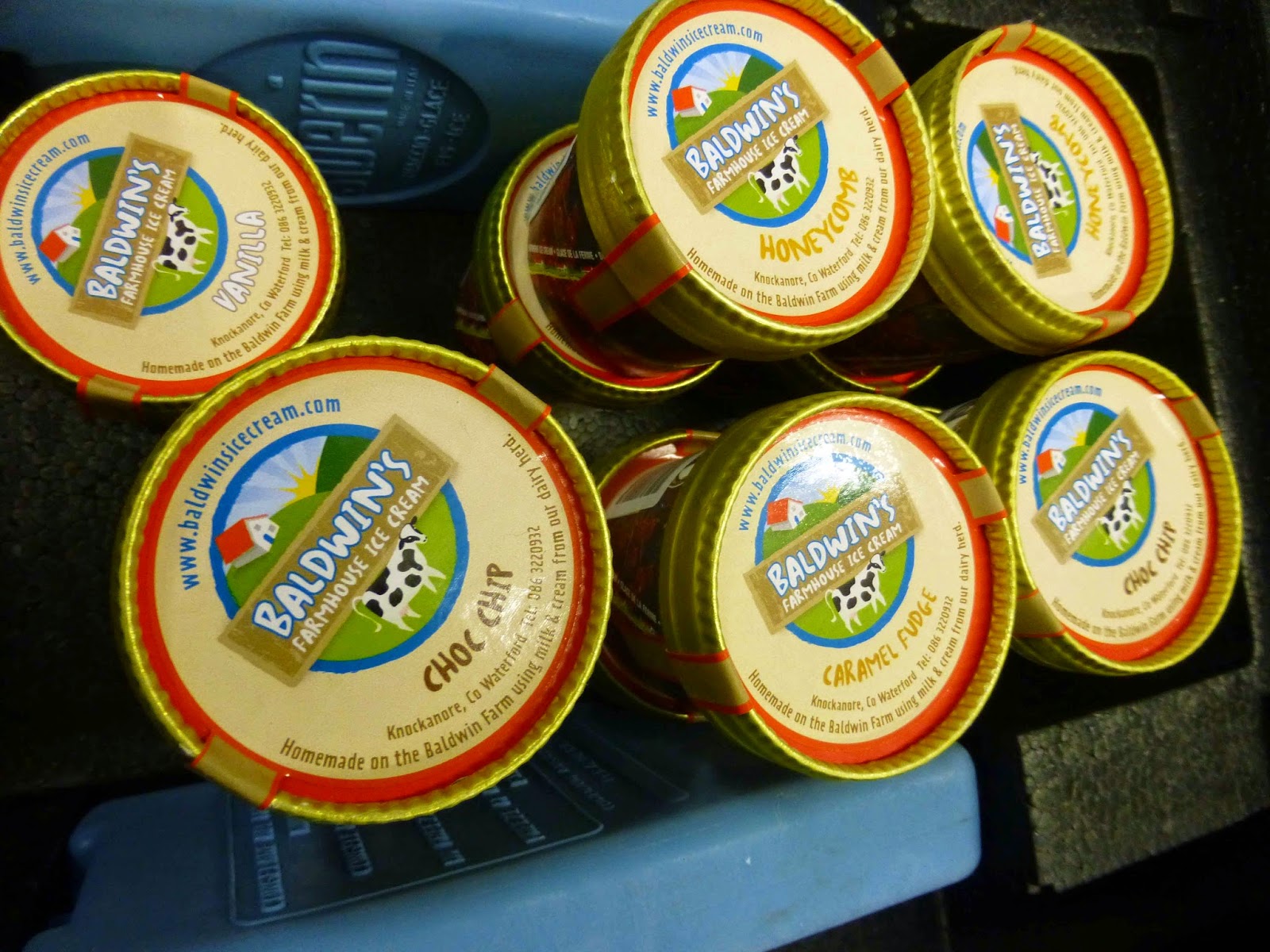 “We make ice-cream the traditional way. Sarah (who plays a similar role at Lonergan’s) does production for me two days a week. The eggs used are free-range, and all ingredients are natural. We sell to cafes, restaurants, hotels, retail. We pride ourselves on the unique quality and that comes out in the product.”

It is all manual work “at the moment”. “It suits me, is very flexible. For instance, if a chef wants a particular small order, we can do that special.”

The ice-cream enterprise has seen the dairy herd grow from 50 cows to some 100 plus. He still delivers direct to the customers: “We have no central distributor. I’m happy the way I'm going as it is a sustainable model. Most of our customers are in Waterford and Cork and we have built a good reputation.”

Back then to the bus and we retraced our journey to Cappoquin. Here we stopped at Barron’s Bakery which has been operating for five generations, serving only the local community (up to an 11 mile radius) for all those years. Esther Barron was our passionate host at the oldest bakery in Ireland and she underlined the importance of spending locally.

They have 12 employed nowadays and bake during the night, using the amazing old-fashion Scotch Brick ovens. Bread-making here is a slow process but the bread is all the better for it. The bread is two hours in the making before it even gets to the oven whereas a factory process take only 20 minutes. “Hand-moulded bread is always more flavoursome. The bread can't be rushed. My father used to say ‘the art of bread-making is beyond science’”.

The bakery was established in 1887 and is one of the last bakeries in Ireland that still uses the Scotch Brick ovens. These give the bread an unique taste, flavour and crust as we found out for ourselves thanks to a parting gift of a Waterford bla from Esther and Joe.
A great half day on the bus, all for 15 euro. Put it in your diary for next year!
See also: The Tannery Kitchen Supper.
See also: From Power with Love. Persian Dinner. Gorgeous. Generous.
See also: Craft Cider’s Challenges. More Like Wine Than Beer
See also: