Gin, Whiskey and Cider were among the tipples highlighted in a drinks series at Merry’s Pub in Dungarvan as part of the West Waterford Food Festival. Simon Tyrrell spoke on Craft Cider on Saturday and gave us an idea of the challenges, both natural (weather, terroir) and regulatory (punitive duty), facing the new wave of producers.


Simon, a winemaker in the Rhone, makes Craigie's Cider in County Wicklow, where his partners are Angus Craigie, Ralf Högger, Emma Tyrrell and Alan Garrioch.  Sourcing good apples can be a problem; Simon is convinced that Ireland produces some of the best apples in the world “but difficult to find”.


Dabinett and Michelin are perhaps the best known cider apples in Ireland. Simon works a lot with Dabinett. “It looks awful, gnarled, small. The flesh is woody and it has tannins.” But these tannins give structure and also help the cider age and eventually helps the interaction between cider and food.


Cider makers only get one chance a year to get it right - a major difference with the making of beer! “We only make vintage cider, “ he said, as he introduced us to Craigie’s Dalliance 2012. “No blends from different years. Cider should taste different from year to year.” Cider looks to express the best qualities of the fruit, show where the nuances lie.
The apples used in 2012 were from the Cappoquin Estate. Elstar is a favourite with Simon: “the finest eating apple” accounts for fifty per cent of the blend. The varieties, the other is Falstaff, were fermented separately “because they ripened separately” and are then allowed sit on the lees for 15 months.


“You have pear and apple like flavours and a natural freshness. The PH, at 2.9, is very low and this helps protect the emerging cider”. 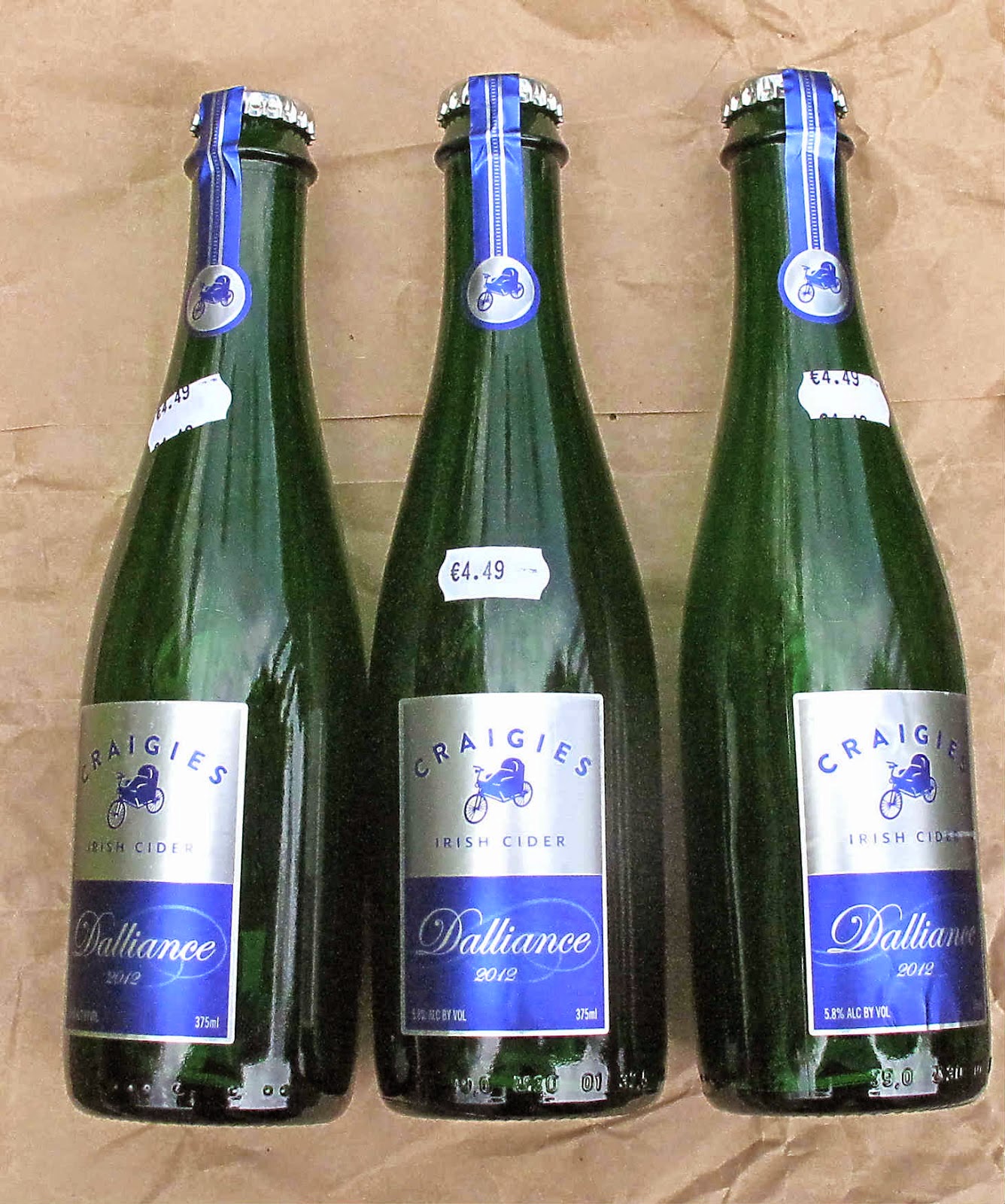 Next up for tasting was the Dalliance 2013 and there were differences, some down to the weather which was better for this one. June and July were very good months and September was above average.

“This is a different drinking experience. It is drier, has a less complex flavour profile but not the concentration of the 2012. Might get there but not sure!”

If the Dalliance illustrated the effect of the weather, the next cider, the Ballyhook Flyer, showed the way soil can impact on the cider. The Flyer is their “principal” cider and is made from 80% Dabinett (availability of this type is increasing) and also some Katy (desert) and Bramley. As he talked  us through the Flyer 2012, we could see that the “dry” sensation is more prominent than in the Dalliance. “Because the PH is higher.”

An extra orchard, near Carrick on Suir, was used for Dabinett in 2013. Here, a slight change in the soil type gave the cider more body, more tannin, and Simon is thinking of using barrel aging in future vintages of the Flyer to “help polish the tannins”. The aromas at this stage are less expressive. It has some of same characteristics as the 2012 but the style is “more gripping” because of the new source for the Dabinett.

And if the problems posed by the weather and the terroir weren't enough of a challenge, you have the punitive tax imposed by the government if the ABV (alcohol by volume, expressed as a percentage) is higher than six per cent and remember that higher ABV could be a natural outcome of the harvest. Luckily EU law allows variations but generally Irish law on the subject does not cater for variations of nature and this can encourage people to water it down. Not what we want at all. And certainly not what any craft cider maker wants.

Happily, we have dedicated people like Simon leading this new wave of cider makers and they should be supported in their efforts. You can see the list of makers here at Cider Ireland. The best way that we can support them is buy local Irish craft cider. And there are some excellent ciders out there as was so ably illustrated in Merry’s.
See also: A Tour of West Waterford Producers on the Bus Bia
See also: The Tannery Kitchen Supper.
See also:

From Power With Love. A Persian Dinner. Gorgeous. Generous