The Dingle Taste Trail. Biggest in the land?


Biggest in the land?
No danger of going hungry on the streets of Dingle last weekend. No less than 81 outlets took part in the gigantic Taste Trail, a major feature of the annual Food Festival.

And it wasn't just food outlets. An Siopa Ceol, Liam O’Neill Art Studio (where Derry Clarke served up the local Mutton pie) and Dingle Crystal were among those in the merry mix.

And what a mix! Your tokens (or cash) could buy you anything from a Shark Snack to a Pumpkin Soup, from Vegetarian Sushi to those mutton Pies, from a Dublin Coddle to Dingle Fudge. Not to mention a full range of drinks, including local spirits (Dingle Distillery) and local beer (Tom Crean Brewery). 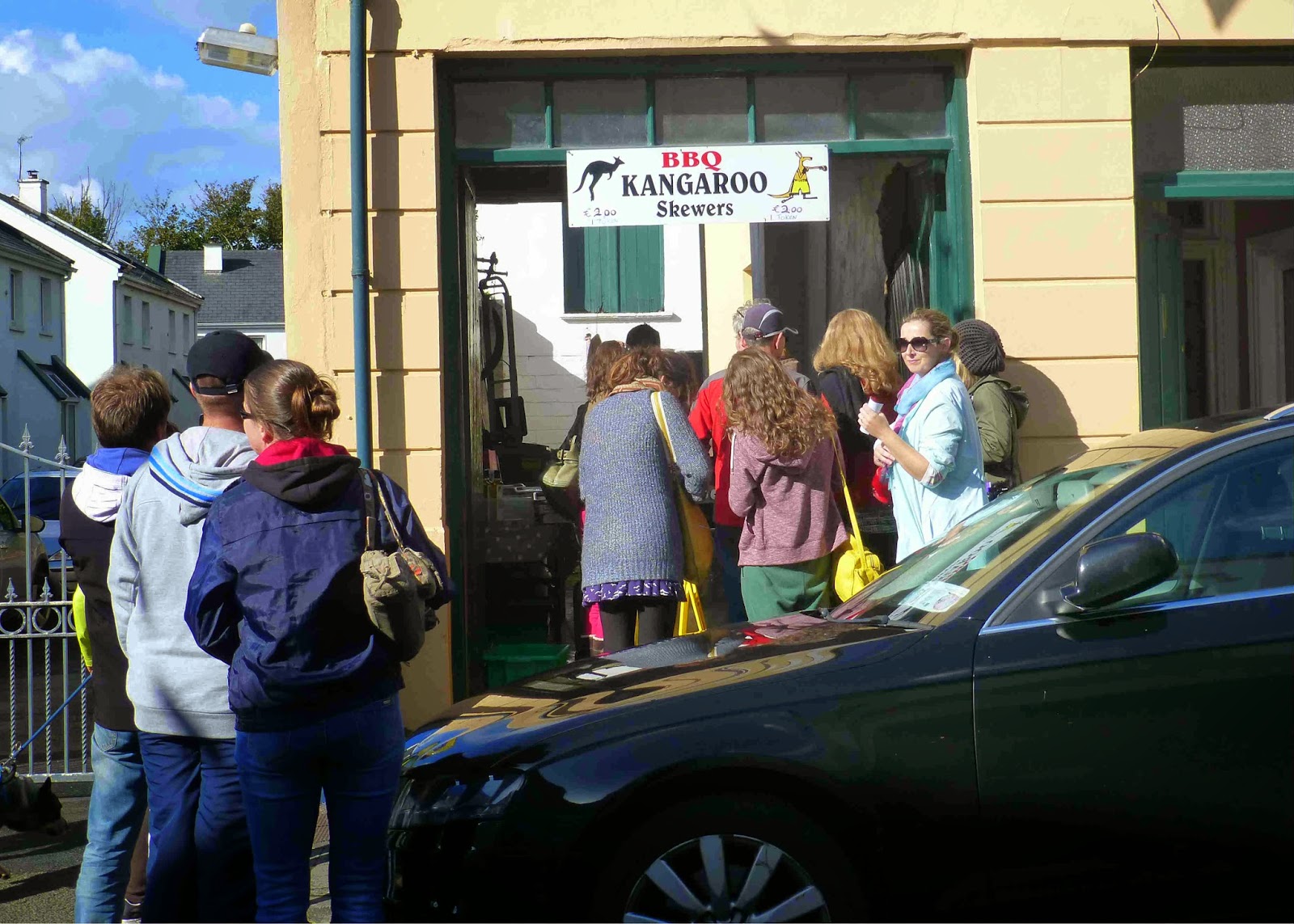 So where to start? The highly rated Out of the Blue was our first port of call and here we enjoyed their shark bites. Tasty stuff. From a nearby wagon, we got some fish on a skewer.

Time then for a glass (or more) of wine at An Siopa Ceol where Karwig Wines rep Frank conducted a band of enthusiasts through a quartet of whites. The opening wine, a “spritzy” Vinho Verde, provided a cheerful allegro. He brought us down to andante then with a duo of Italians, Passarina and Pradalupo. And the finish, a golden 2007 Monbazillac by Chateau Belingard, was dolcissimo. Bravo Frank.

That pleasant interlude behind us, we hit the trail again. Big queues at Fenton’s for their Dexter mini-burgers and at Finn McCools/Bushtucker Meats for the kangaroo. The vegetarian Raclette at the Little Cheese Shop was causing a lot of oohs and aahs as we passed.

Time now for a pause and a sit-down at the Pie Cafe. Here I enjoyed a Sweet and Savoury Pie and a pot of tea. The Cornish Pasty had one half filled with venison in red wine and chocolate, the other with raspberry and strawberry. Super. Must remember to add this place to my list of Irish Tea Rooms.

We thought we had all the market stalls covered during our morning ramble but, just off Main Street, we stumbled on another packed section in a cul de sac where we said a quick bon jour to Laurent of Buffalolo. The highlight here was a superb Venison Sausage with a blackcurrant mustard by local butcher Jerry Kennedy.


Retraced our steps to Main Street and headed down to John Street where we had another top class treat, a buckwheat crepe filled with goats cheese and sun-dried tomatoes at the Creperie Ti Koz.

Didn't have the Breton cider there but, back on the sunny street, the need for a drink asserted itself. An Canteen was (and always had been) our destination of choice.


The street outside was packed and it looked impossible to get in. But there was no bother. It was just that the punters had moved out to get the sun. At the temporary bars set up around the small restaurant space, craft producers such as Franciscan Well, Porterhouse, Mountain Man, and Tempted? were selling their tasty wares.


Met Daniel Emerson (Stonewell) and Sam Black (Kinsale) and they gave me a sample of a cider and beer mix that they have been collaborating on. When I asked what they were calling the tasty drop, full of flavour and strong at 15% or so, they chimed W.I.P. (work in progress!). Worth keeping an eye on.

A shower brought the crowd back into An Canteen. The rain didn't last too long and soon we were looking for something sweet to finish the tour on. Murphy’s Ice Cream was to be our final stop and here I enjoyed their Atlantic Caramel (honeycomb and butterscotch ice cream). A sweet finalé indeed.