The Dingle Distillery Tour. Well worth ten of your euros!

October 06, 2014
The Dingle Distillery Tour
Well worth ten of your euros!


When you arrive at the Dingle Distillery, just west of the town, you’ll want to look inside. But your guide Joe tells you to look outside. “Look through the gates there,’” he says, then directs your gaze further out to the mouth of the harbour. It is, even on a dull day, a pretty picture and one that appears on the Dingle bottles.


It doesn't appear yet on their whiskey bottles, the reason being that their irish whiskey is not yet on sale. By law, Irish whiskey (spelt with an e) must mature for three years and one day. That period will be up for Dingle at the end of next year but it could be well into 2016 before Dingle Whiskey appears on the shelves, joining the gin and vodka which are now available and bringing badly needed revenue into the fledgling operation.

Joe took us, a small international group, though the history of the liquid. His story says it was “invented”, though more likely a happy accident, around the time of Christ. The Irish may well have been the first in the Northern Hemisphere to distil it though the first written reference to it here does not appear until 1405. 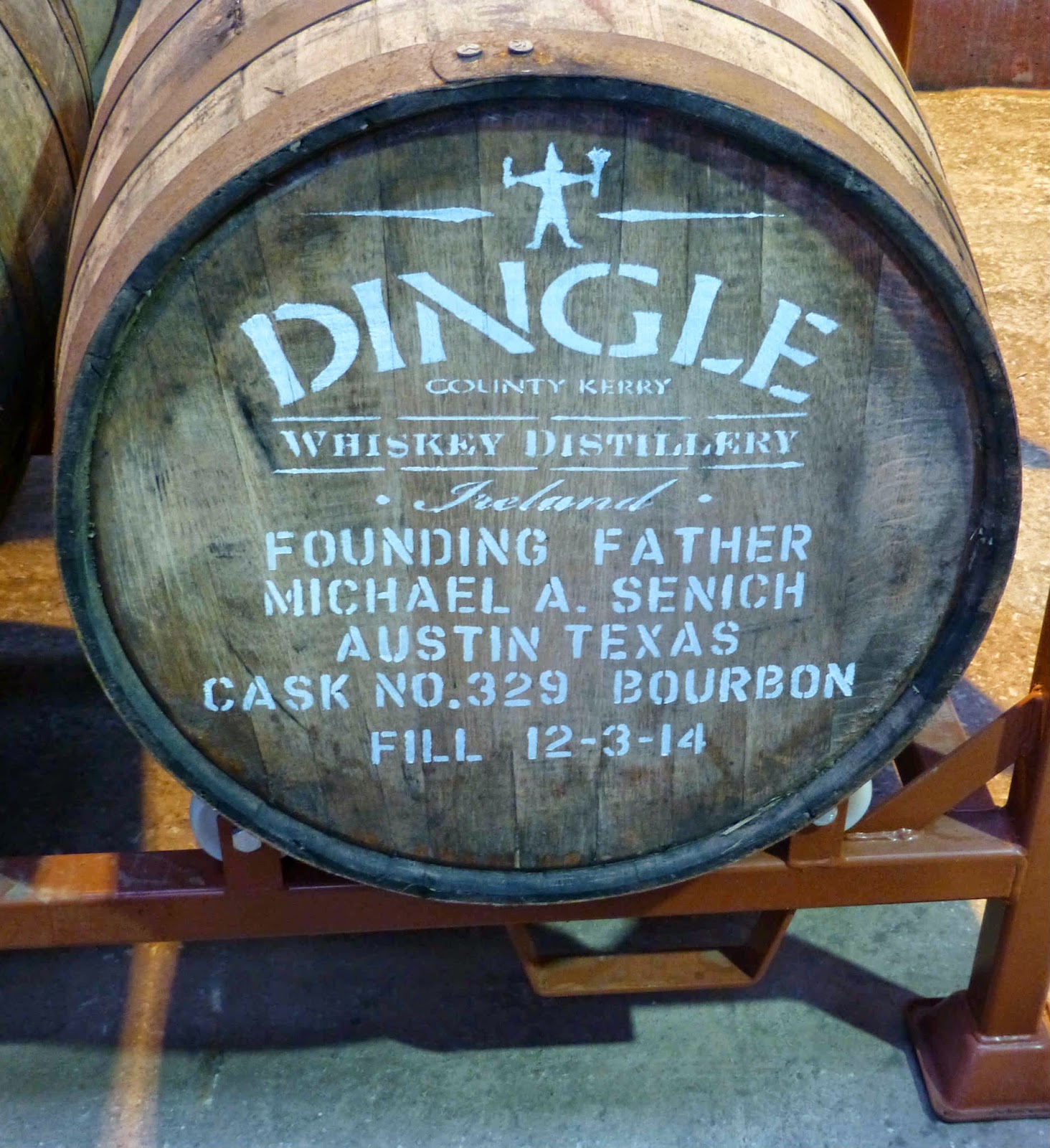 It is often claimed, and Joe endorsed it, that the word whiskey comes from the Irish word for water which is uisce. Uisce beatha is the Irish name for whiskey and this translates as water of life and has many equivalents (eg aqua vitae) in European languages.

Joe reckons the Norman invaders couldn't quite pronounce uisce (maybe they were drinking too much!) and changed it to whiskey. No shortage of humour when Joe’s your guide. He recalled an old Irish saying: “When you’re well, whiskey makes you sick; when you’re sick, whiskey makes you well.” Whiskey making though is no joke. “If things go wrong, you could end up with porridge.”

He took us through the technical details of the process as we walked around, telling us that towards the end, the alcohol count is in the high 70s, early 80s. The strength is reduced by adding water before bottling.

The process here follows the usual Irish practice.”Triple distillation gives a very smooth whiskey, much smoother than the Scotch which is double distilled.”

Dingle buy in Ethanol to make their gin and vodka (not Joe’s favourite drink: “does nothing for me”). This is already distilled four times. Dingle distil it one more time and, in the case of the gin, add in their own botanicals (which he didn't disclose!).


Gin, he told us, is a Dutch (not a British) invention and that is why we get the term Dutch courage for alcohol induced bravery. This was just one of a few explanations. He also had one for the term Blind Drunk, no laughing matter. Drinking methanol, one type of alcohol, will literally turn you blind.

Our tasting was of the Gin and Vodka (both in attractive distinctive bottles) and we got a few tips but generally the talk was of whiskey. Joe emphasized the importance of the casks but cautioned that to get good stuff out, you had to put good stuff in. 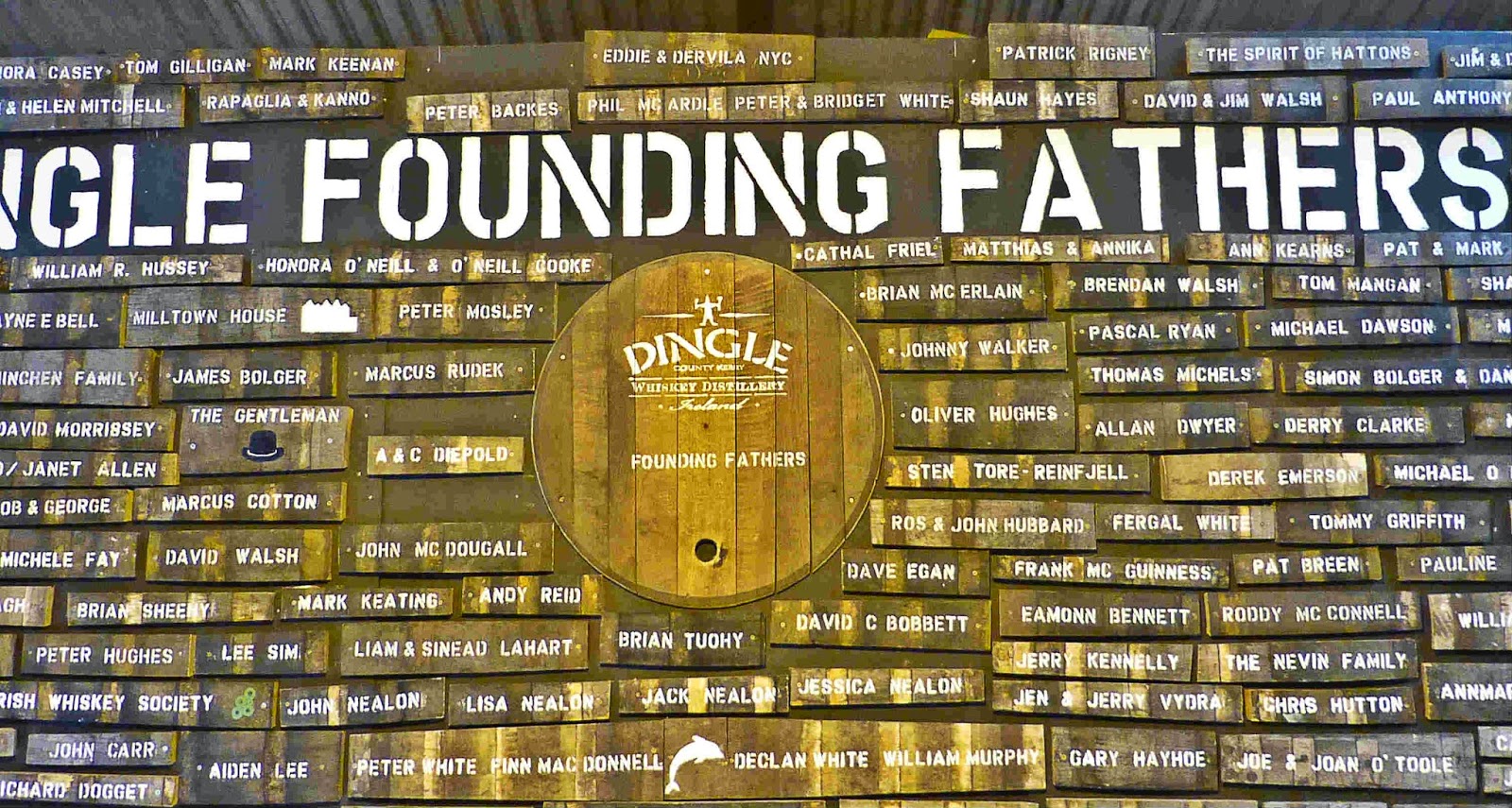 The cask of choice currently is one that had been previously used for Bourbon, Sherry or Port. We were able to taste some of the immature whiskey, including some at 20 months, and could get the flavour of whatever had been in the cask previously.

Quite a few people have invested in the distillery through buying a cask of the whiskey for the future and these casks are named and stored here. In addition, there is an internal wall where the names of the founding fathers are displayed.

It looks like they have made a wise investment. Joe says that there is a renaissance of interest in whiskey worldwide. Quoting from the New York Times, he said the foxy lady (a name sometimes used for the liquid) is appreciating in value at a higher rate than gold!

And that was it, tour over. On the way down, ex cop Joe said: “Drop into the office and I’ll take ten of your euros off you.” Well worth it Joe. Thanks for the entertaining and informative tour.

I was in Dingle for the Blas na hEireann Awards and the Food Festival. Read all about it here. The Taste Trail was another highlight of the weekend. 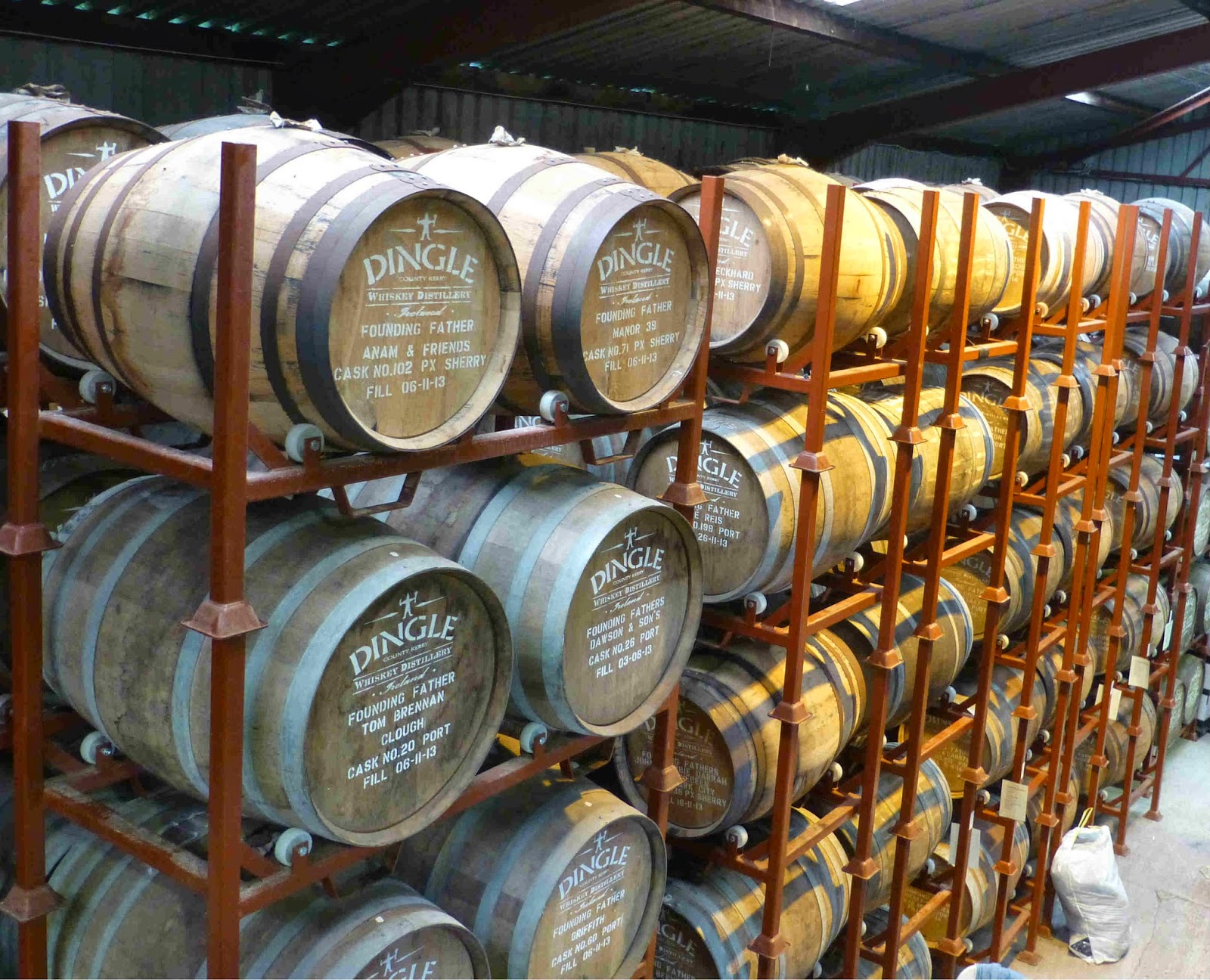