Soledad Martin, Export Manager with Luigi Bosca Argentina, was delighted with her steak in the chimichurri sauce, and we were delighted with the set of gorgeous wines that she presented at Friday’s Cork Supper Club Dinner in ClubBrasserie.

Established in 1901 by Leoncio Arizu, Bodega Luigi Bosca has an extensive track-record in the local winemaking industry. Currently managed by the third and fourth generations of the Arizu family, it is one of the few winemaking firms that is still owned by its founders. Its reputation, gained over the years, has made it the paradigm of Argentine

Gary O’Donovan introduced Soledad and the well travelled young lady told us that the winery in Mendoza was formed in 1901. There are two ranges produced. The lighter wines come to us under the Finca La Linda label while the flagship wines come under the Luigi Bosca label. Both are imported by Searson’s and they had Damien Archer on hand to mingle with the guests.

Must say I was pleasantly surprised with the two whites that started the evening. The Viognier was described as the “best value Viognier that exists” and it sure was excellent with a great aromas, flavours and finish. Very impressed with it but I think my favourite was the Torrontes, a “great Argentinian variety” according to Soledad and amazingly the grapes are grown at 1700 metres and some 15 hours distant from the winery. It is a different style and a different structure from the Viognier.

Torrontes  is the most distinctive of all Argentine wines, including both white and red, because Argentina is the only country to produce it. It is considered a wholly Argentine variety.

There then followed a couple of La Finca reds, including an excellent Malbec, “the powerhouse of Argentina”. Again though it was the other red, the Bonarda, which caught the attention of my taste buds. Described as a wine to drink while watching TV or a party wine, it is indeed a very agreeable companion and, like all the six wines on the night, great value as well. 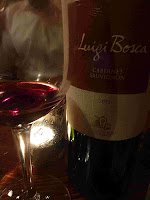 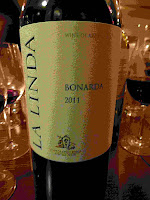 On next to the two wines under the senior label. First up was a terrific bottle of the Cabernet Sauvignon Reserva 2010, a powerful rounded wine. Excellent but there was even better to come. The star of the reds was the Malbec DOC Single Vineyard 2009. Produced under stricter regulations, from vines that average 70 years of age, it has been three months in oak and is fantastic value at twenty euro.

Torrontes, grown at 1700m in the Salta area. Some 15 hours away from the winery in Mendoza. : Light yellow-green, with floral aromas, hints of rosehip and a touch of lavender. Sweet palate, balanced acidity, notes of white peach and memories of orange peel jam.

Viognier, Exotic, clean and bright golden white wine. Well-defined aromatic notes of orchid, musk and ripe apricot. Felt with an oily texture in the mouth, and creates a general harmonious sensation. Prolonged finish and penetrating acidity.
Malbec, aged 3 months in oak. Intense purple colour with distinct aromas of cherries and spices. Balanced tannins are perceived in the mouth as a result of three-month ageing in French and American oak casks. A varietal of great typicity and volume, well-structured, velvety, elegant and up-to-date.
Bonarda, aged 3 months on oak. Bright ruby-red wine with aromas of red fruit, dry fig and a touch of wood contributed by 3-month ageing in American oak casks. Full-bodied, smooth to the palate, round and velvety, with a compact and well-structured aftertaste.
Luigi Bosca Cabernet Sauvignon Reserva 2010. Full svelte sweet cassis fruits in a powerful rounded wine. A superb Cabernet with rich powerful silky smooth cassis and mint fruits, with a lingering rounded finish.
Luigi Bosca Malbec DOC Single Vineyard 2009. This pioneering DOC was launched in 1991 “to protect the “preserving Mendoza’s richness”. 70 year old vineyard. 100% Malbec. Handpicked. 14 months in oak. Deep violet colour, with aromas of ripe cherries and plums. Additionally, it is spiced with notes of blackberries and mocha. Solid but elegant structure and balanced acidity. Mouth-filling, powerful yet subtle, with excellent typicity.
All six wines are available in O’DonovanOff Licences.  The first four at each at €12.99, the Cabernet is €17.99 while the DOC Malbec comes in at €19.99. 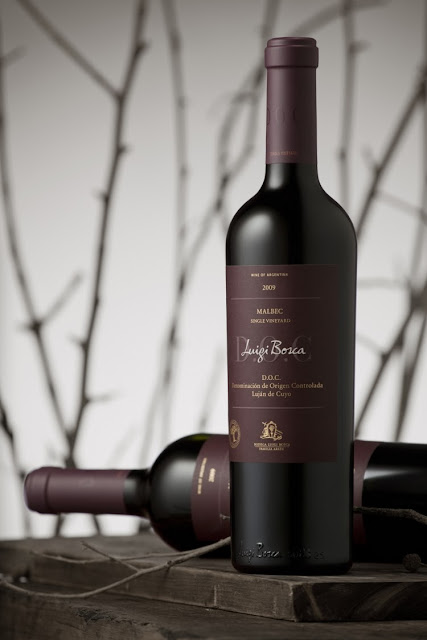 The Food
Well, if the wines from Argentina were in great form, so too were the crew at Club Brasserie. And we benefitted from some rally top notch dishes. The highlight was perhaps the Steak with the garlic and parsley sauce that always accompanies grilled steak in Argentina. Known as Chimichurri, you don’t see it very often in Irish restaurants but it was a terrific sauce and would be quite a change to the usual sauces here. Also thought the opening salad was superb.
Starter: Pancetta, Crozier Blue cheese, toasted walnuts and roasted pear salad (with a honey and mustard dressing.
Soup: Wild Mushroom Soup.
Mains: Chargrilled West Cork Steak with a chimichurri sauce with roasted tomatoes, Portobello Mushrooms and rustic potatoes.
Or
Pan-fried Cod with Chorizo, white bean puree and caramelised fennel and chorizo.
Dessert: Mixed Sweet plate (Chocolate roulade, iced meringue gateau, cooks and cream cheesecake).
Cheese: Horgan’s Mature Cheddar with a spiced red pepper and tomato relish.