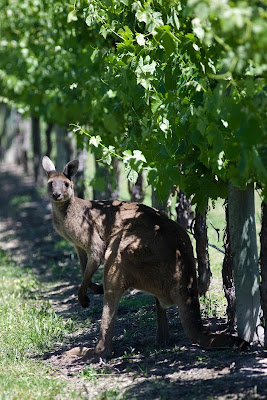 David Bryson, General Manager of Morambro Creek, the South Australian home of Jip Jip Rocks and Mt Monster, was in town at the weekend and wearing a big smile as he met the punters at a tasting in the Ballymaloe Wine Shop at Brown Thomas.

I’m sure David, accompanied by Marcus of Karwig Wines, is in good form all the time but he was really well pleased with a report in the latest edition of Winestate, the Australian/New Zealand equivalent of Decanter. The magazine was reporting on what it called the world’s greatest Syrah/Shiraz challenge where no less than 582 were tested.

What made David so pleased was the fact that the 2012 Jip Jip Rocks Shiraz, which sells for 19.95 dollars, scored 4.5 stars in the tasting. Contrast that, as he did, with the well known Penfolds Grange Shiraz 2008, which sells at €785.00 dollars, and scored a measly three stars. "You can see where the value for money lies!"

While you are waiting for the 2012 to come, check out Karwig Wines in Carrigaline where you may buy the 2010 for €16.80. That’s the one we tasted with Ballymaloe’s Colm McCan at BT and the multi-award winner in the 2011 Sydney International Wine Competition sure came up trumps in Patrick Street.
The Jip Jip Rocks sparkling Shiraz rightly caught much of the attention at BT and it sells steadily and well. “The sparkling is a little quirky. It has an elegant style and a good dry finish”, David told me. “But it is the still Shiraz that is our best seller.” Must say I’m not surprised.

We also got to taste the 2011 Jip Jip Unoaked Chardonnay, the fruit of "the wettest, coldest summer" but the weather helped this one, said David. And so too did the intervention of winemaker Ben Riggs who asked why not make a great wine better and did so by including ten per cent Sauvignon Blanc "to give a lift on the nose". Delight in a glass for sure and worth seeking out. This is another medal winner and the 2011 will cost you €16.80 at Karwig’s.

The tasting concentrated on the Jip Jip Rock vineyard but I also managed a sip of the Morambro Creek Cabernet Sauvignon 2009, another medal winner and indeed quite a superb wine. It is selected from a small number of outstanding barrels each vintage. Traditional wine-making and minimal processing feature strongly in the making of “this Cabernet derived from our estate vineyard”.

Padthaway, on the Limestone Coast, is the area in which you’ll find the vineyards that David and his brothers, Paul and Andrew, look after. Their parents, Clive and Elizabeth, built the wine business up over the past half century before handing over to their three sons. Since 1851, five generations of the Bryson family have been involved in agriculture in the area.