Margherita! Look what you started.

In Bruno’s in Kinsale, they make a pizza using Frank Hederman’s smoked mackerel. It is a mouth-watering taste experience.

Probably would not have been recognized in Naples in 1889. At the start of that year, according to food writer Matthew Fort (Eating Up Italy), there were just two pizzas. One was the basic pizza bianca (the crust plus olive oil and a garlic rub), the other the pizza marinara (so called because the sailors could take the ingredients to sea with them).

Then Queen Margherita of Savoy came to visit and they invented the pizza Margherita, “which combines tomato, mozzarella and basil leaves in imitation of the Italian flag in her honour”.
Pizza would never be the same again, as topping after topping was invented and used. Not sure that anywhere else uses the smoked fish, maybe they just haven’t any as good. But, if you are in Kinsale, do drop in to Bruno’s (open from six every evening) and treat yourself.

And you may well keep returning and studying the pizza. You may start at the start as they do both the Marinara and the Margherita and specials keep popping up on their big red board (also on their Facebook page). The mackerel is not the only local produce that Bruno’s use as St Tola Goat Cheese, Jack McCarthy’s Black Pudding and Toonsbridge Mozzarella also appear on the menu.

Aside from the produce, another plus is that the Bruno pizza is done in their own wood fired brick oven, especially imported from Naples. It is complete with paddle which you can see being wielded in the kitchen, viewable as you come in the door. 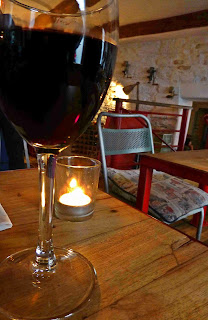 And another factor is their crust is made from slow rising sourdough. You know the way many pizza edges are hard and usually discarded. Not the case here. I ate every crumb of mine. A little Primitivo and later a little Valpolicella helped!

Not into pizza. Don’t worry. Lots more to choose from, including salad and bruschetta. Perhaps you’d like a fish dish such as Fresh local squid with chill and garlic. Maybe a heap of courgette ribbons.

What was that again? A mound of courgettes ribbons. Yes, indeed, another surprise for your taste buds. Doesn’t sound much, does it. And, even when topped with a bunch of pine nuts, the green and white mix doesn’t look that great.

But take a chance and start eating and soon you’ll know you are enjoying quite a treat. A treat that shows the policy of buying locally and in season and handling the produce well is paying off, not just for Bruno’s Tom and Fiona but for their customers as well. No wonder then that on a gloomy mid-September night, the split level restaurant is full!


It is quite a quirky building, built up the slight slope in the street and finishing as a sharp edge between two streets. That initial triangle is where the kitchen is and then you have two rooms on different levels. The exposed stone walls are whitewashed, ceiling beams are exposed and generous cushions mean you may eat and drink with comfort.

And with some class as well. So now, do go down and try that Hederman pizza. Or of you prefer meat to fish, then maybe the one featuring Jack McCarthy’s black pudding is for you. It will be for me, next time I visit. Margherita! Look what you started.