Telmo sees future of Spanish Wine in the past

September 13, 2013
Telmo sees future of Spanish Wine in the past 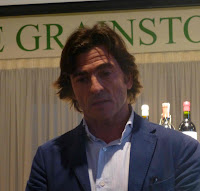 Wine lover Telmo Rodriguez, he doesn’t particular like being called a wine-maker, declared in Ballymaloe last evening that wine in Spain “had been in the wrong hands, now it is starting to be in the right hands. I am between a boring generation and an exciting generation”.

To find the brighter future, Telmo went back to the past. He could have had comfortably slotted into the family winery Remelluri but, after an intensive wine education in France, he eventually headed off on his own.

And to the most unlikely places. Barren hillsides where vineyards had been abandoned. Sometimes a few survived with practices dating back five hundred years, including “beautiful bush vines”.

“I support the bush vines,” he said and, pointing to the wines he was showing, “I am proud that none of these were on trellis. Small bush produce rich concentrated wine. And the bush protects the grapes from the hot sun. Grapes on trellis are like a sun-burned Irishman in Marbella.”

He deplores the New World concentration on the grape variety as the most important element. “In the Old World, the grape is the loudspeaker to show a place”, a medium to convey “the taste of a place”. Oak he sees as an enemy of that taste. “When oak becomes cosmetic, we are destroying the taste of the place. None of my wines are called Crianza – doesn’t matter to me.”

He spoke fondly of the family vineyards at Remelluri which have a history dating back hundreds and hundreds of years – in the 16th century the monks were already producing wine there.

Telmo remembers the mules coming in and working in the vineyards and also when his father bought the first tractor. After France, Telmo worked there for a while before moving out from what was considered the first Bordeaux style chateau in Rioja.

But now he is back. And has been for some years. The big estate, which had always tended that way, is now “absolutely organic, with plenty of grass and flowers, and we are always working to be more pure, more radical. The sense of history and place is very important to me.”
He showed seven wines in all and each had a story. Perhaps the strangest was that of his Mountain wine, the Malaga Molino Real, a sweet wine. This was a dream he pursued, having heard references to it via the unlikely pairing of Shakespeare and Hugh Johnson.
But it had disappeared and off he went to Malaga and began to search for the high altitude old vineyards and, as is his habit, talked a lot to the old people and in particular to the old women drying grapes by hand and they told him that “every single grape was massaged by hand” in the old days.
He didn’t go that far but, in 1998, settled on an area and with advice from Château Y’Quem, started production. He secured a plot and then planted it with Moscatel.  It took three or four years. He finally got it right and the exquisite result was in our glasses last night. “Never did any business with this wine but I’m proud of it.”
Reckon Telmo has quite a lot to be proud of. And, with a record of longevity in the family, he has quite a future ahead of him and is sure to keep Spanish wine-makers on their toes, to all our benefit.

During the tasting, we had some lovely Spanish nibbles provided by Sylvia and Olga of La Cocina who can see at local Farmers Markets, including Douglas (Saturday) and Blackrock (Sunday).