September 22, 2013
Slinging Arrows on Culture Night
Here’s a bit of culture for you:
I shot an arrow into the air, It fell to earth, I knew not where.

I tell a lie. It was at Elizabeth Fort on Culture Night that I let fly. Up and away. Well it would have been away but for the enormous wall of the fort as my first ever shot from a bow flew well above the huge seemingly unmissable target. Got better with the next two though, still no bull’s eye but closer. Well done to the members of the Cork City Archery Club for helping the young and the not so young have a bit of fun. 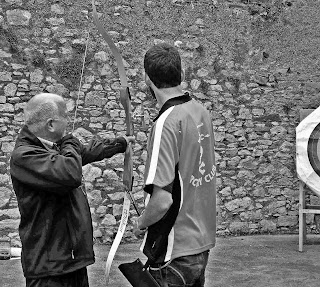 Bit disappointed though that we didn’t get to fire cannon balls. That would have caused some consternation in the area of the historic fort (early 17th century). Reckon I’d have chalked up a bowl of odds (more Cork culture) up South Main Street!

We did have the red coats on hand though and they were demonstrating their prowess with the muskets. After a couple of technical hitches and malfunctions, the shot went off and, despite being ready for it, we all jumped as the noise echoed around. Great fun and thanks to everyone involved.

Oh, almost forgot. We had a guide to take us around the fort and fill us in on the history. Some great views up there, a great semi-circle of the city visible from the east, to Shandon and other churches of the north side and out to the west. The nearest church of course is the great St Finn Barre’s and you get a fabulous close-up. 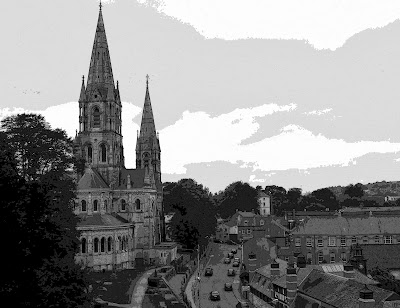 The English Market were ready for us now and we were ready for it. After a sample of Tom Durcan’s spiced beef, the first serious stop was Frank Hederman’s: Jazz, Cava (via Bubble Brothers), a chat with the busy Mrs Hederman and a carton of their terrific smoked salmon and smoked mackerel with salad and veg.

The Market was packed. You could hardly move. But it was a terrific atmosphere, good manners and courtesy all around. And simple humorous chats also with complete strangers when you shared a surface to eat. Chats too of course with quite a few that we knew, Cork being both a city and, especially at times like these, a village. 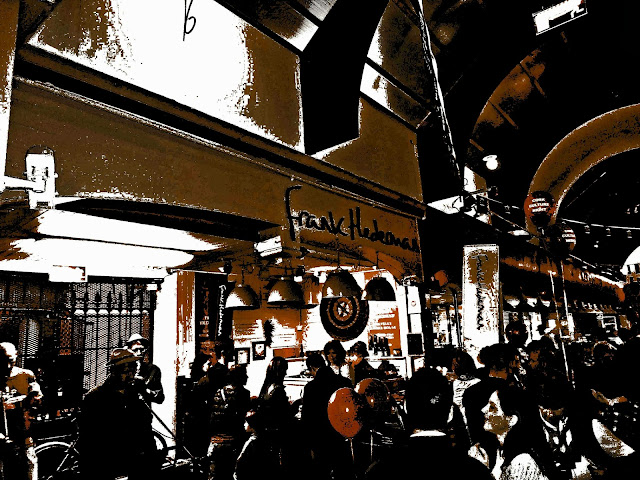 O’Connell’s Fish always contribute on these kind of evenings and they too were buzzing, their menu going down a treat. Here I opted for a tasty crab cake. Just around the corner then to the Olive Stall where a plate of their goodies and a glass of wine cost a reasonable six euro, all put away as the music played, a traditional trio at this stop.

Getting full now and feeling like dessert. Knew Lillie Higgins was operating at the ABC stall and she had a few sweet things at hand: Chocolate Soup with frangelico, softly whipped cream, toasted hazelnuts and a hazelnut sourdough soldier was the first; another was Belgian waffles with salted caramel sauce and Chantilly cream. Both were winners.

And we felt like winners as we headed out of the market, unable though to resist buying some Turkish Delight before getting the bus. The sweets, along with a glass of Chaume (recently acquired at Château Soucherie in the Loire ) provided a sweet end to a sweet night of culture. 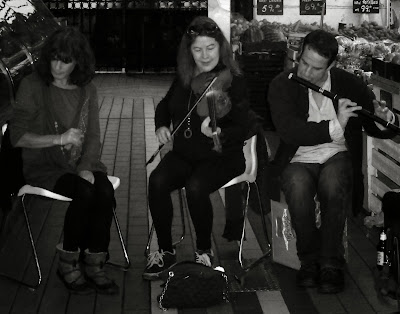