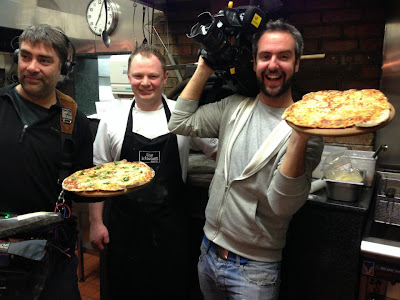 Food Fight takes the ever popular food/restaurant format and adds a competitive edge to the proceedings, by pitting two celebrity chefs against one another.

A one-off special, where two well-known chefs, Derry Clarke and Clodagh McKenna, are given the task of designing the ultimate Christmas themed restaurant.  They are transported to a small Irish town location where two similarly sized eating establishments have agreed to allow them to take over for four days.

With Food Fight, viewers will watch Derry Clarke and Clodagh McKenna go to Gorey, where they will each take over a restaurant.  Each Chef will have just TWO days to revamp their restaurant, meet their staff, devise and cook menus which will ultimately win over the locals when they open for business ready or not, and over the next two nights try to win over the locals.  The locals will judge both of the newly run establishments with their wallets, as the diners will compare and criticize both venues etc and leave comment cards telling the chefs what they really thought of their night out.

Derry and Clodagh’s task to create the ultimate Christmas eating experience.  Working to the same budget they must revamp, and restyle their establishment, as well as design a menu, source and cook the food for the two nights they are open. Each Chef must train their staff and bring both the kitchen staff and the front of house staff up to speed on their ways.  Finally, they must each advertise their restaurant to get to ensure they get full houses and maximum profits.

The Chef with the most profits will be crowned victor with profits from both restaurants going to SVP, Gorey. Food Fight is produced by Another Avenue and will air Thursday 27th  December, 6.30pm on RTE 1. Read more here