Brendan Cashman and the magic of Brining

Brendan and the magic of Brining 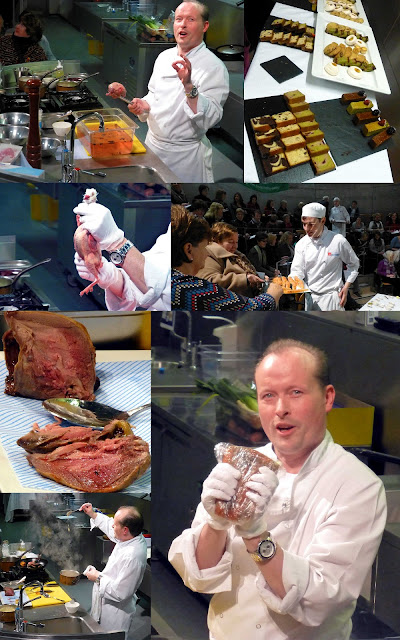 Chef Brendan Cashman brought his cooking magic to CIT this week. Turkey, Smoked Salmon, Pan Roast Squab Pigeon and a dark Chocolate Cake were all on the list but it was brining that caught the attention of the audience.

Brendan, giving his services free for this charity event (in aid of St Vincent de Paul), started the evening with a demo of his Alternative to Smoked Salmon. The cure here consisted of lemon zest, dill, coarse sea salt, castor sugar and peppercorns. Samples were soon passed a round amid hums of approval.

The main practical demo had Brendan showing us how to cook his Pan Roast Squab Pigeon and Confit leg. The crown had been placed in brine for four hours. But before the pigeon was finished, we had a break, enjoyed some sweet delights produced by the CIT students.

Back to the splendidly appointed demo area then and Brendan explained the Brining. “Several years ago, I began to brine all kinds of meats, fish and vegetables to ‘infuse’ or impart more depth of flavour. In simple scientific terms it breaks down the muscle filaments, helping tenderise the meats. Once the filaments have broken down they can begin to absorb the flavours in the brine.”

Bringing was one of preserving options used before the refrigerator and is now making a huge comeback in modern cuisine, particularly in Scandinavia, and is an everyday approach to flavour enhancement in Michelin starred kitchens all over the world.

All attendees received a bunch of recipes, along with detailed instructions on curing, smoking and brining. Brining was again the main topic in the closing question and answer session.

At the very end, we had the results of the raffle for St Vincent de Paul and glad to say I was among the many winners of Christmas goodies. Great cause and a great demo. Well done to CIT’s Tourism and Hospitality Department and to Dr. Margaret Linehan, the Head of School of Humanities, and her staff, who organised the event.

Brendan is officially starting his cookery school in Douglas in the New Year but there are a couple of opportunities to enhance your Christmas cooking skills before then as he has two two-night courses taking place on the 10th and 17th and also on the 11th and 18th of December. For bookings contact him at brendancashman12@gmail.com or telephone 021-4365083.