Bringing the Buffalo Home
Last weekend was the first time that Toons Bridge Cafe was selling buffalo meat. Called there Saturday morning and it was great to meet up with owners Toby Simmonds and Jenny-Rose Clarke and also with buffalo farmer Johnny Lynch. There was quite a selection of the meat and, don’t worry, the cafe/shop will be open from 11.00am every Friday, Saturday and Sunday.

By the way, they sell much more than meat. There are some great cheeses on displays, especially the mozzarella and ricotta. They also do local produce and we helped ourselves to some of De Roiste’s black and white pudding. Don’t forget that they also have a great selection of Mediterranean products, much the same as you see on their olive stalls at the markets, including the English Market.

And if you have time to pause and sip, there is the lovely little cafe.

The Mozzarella came in a plastic bag with its fluid, “the only way to sell Mozzarella” said Toby. We enjoyed that in the classic manner (below), with tomatoes and basil. The following day, the “leftovers” were put to good use, mixed with some marinated Shiitake Mushrooms (from Ballyhoura Mushrooms) and a little salad. The mushrooms added another dimension and we had an enjoyable mix on the plate. 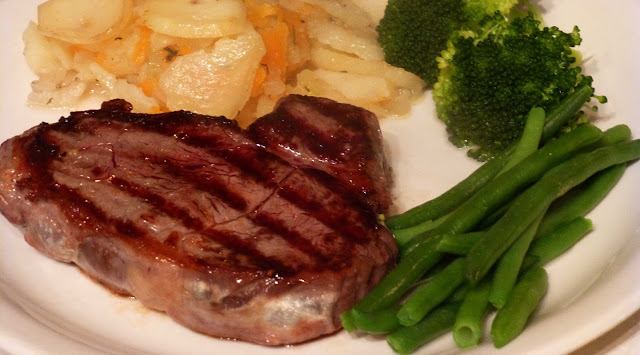 Two fillets were next up and they quickly cooked and were served with pommes boulangères and some greens, not forgetting a lovely Spanish red. Perfect. Next day, we tried the round roast, cooking it slow and low as advised. Very little fat here so the meat could dry out quickly on a higher heat. Served it with roast spuds and parsnips. Very enjoyable.

Aside from buffalo meat having 90% less fat, 67% less cholesterol and 45% fewer calories, the opinion here is that, taste wise, the buffalo meat is not that far away from the more usual beef. After all, Le Buff and Le Bouef are closely related. No doubt, the traditional steak accompaniments, such as onions and mushrooms should also go well with the Toons Bridge newcomers. 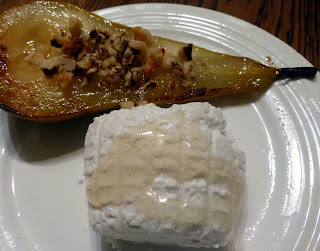 The ricotta can be quite versatile but this time we stuck with it as a dessert, copying the lads in the Mills by drizzling it with a local honey and it worked fine. Also had some grilled pears with toasted walnuts on hand but this was really a second dessert rather than a match.

Also got a tip from Karen on twitter to try spinach & ricotta cannelloni. Next time! There are many ways of using all these fantastic buffalo products from Toons Bridge – indeed they had a recipe for Pot Roast with Red Wine available last Saturday. So why not try it and get yourself down to the lovely cafe before meat stocks run out! 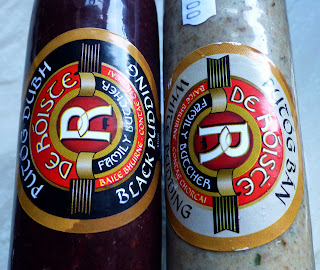