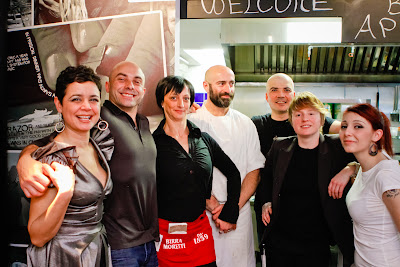 This weekend Rico Valleballa launched his new Italian Restaurant ‘Rico’s’ in The Mardyke Entertainment Complex, Sheares Street, Cork! People queued for over an hour before doors opened at 5.30pm last Sunday when Rico himself welcomed the guests and showcased his new Italian menu.

Guests were very impressed with the new eatery, the delicious food and friendly atmosphere: “Outstanding food at great prices” ...“The Italian’s really know good food”...“A great place for all the family”.

Rico’s menu shows he takes great pride in carrying on the tradition of recipes handed down from his grandmother to his Mother and to the Vallebella Peccerillo family. The family love a celebration and any occasion is the cause for a long meal and a noisy gathering over favourite plates like gnocchetti sardi, ditali piselli or calamari e patate.

Riccardo began trading at Farmers Markets with signature dishes Parmigano and ‘arranchini’ filled rice balls, and within a few years had opened The Castle Bar and Trattoria at Blackrock Castle and Baile Bella, a pizzeria at Blackrock Village.

Riccardo Vallebella’s new Italian venture in Cork is Rico’s at the Mardyke Entertainment Complex and assures you’ll find a familiar mix of fresh fast real food at good prices. Family favourite pasta and pizza dishes will feature along with daily specials from Mama’s recipe book. Start with antipasta and finish with ammazza caffé (to kill the coffee) and eat like the Italians!

Adjoining Rico’s is the new Mardyke Ping Pong bar, the first of its kind in Ireland. So you can enjoy delicious Italian food followed by a few drinks and some Ping Pong – Now there’s a night with a difference!

English brought Riccardo Vallebella to Ireland from Rome in 1996 but the Irish kept him here once the young Italian broke free of Dublin’s Little Italy.

It took coming to Cork for the Jazz in 1999 for Rico to learn the English language and the ways of the Irish and it was to a backdrop of a lively Cork scene that this took place. Rico started working in Cork’s social hot spots at the time including the Bodega, Rumplestiltskins and the Yumi Yuki Club at Triskel. His ease with the customer and skill behind a service counter soon brought him to management attention but it was his love for the kitchen that raised the bar.

Rico and his late brother Maurizio (who followed his trail from Rome to Cork) had grown up with a natural affinity to food and cooking that was second nature.

The family home was the hub for the Vallebella Peccerillo clan and Amalia their mother the centre of this clatter her four sons enjoyed. Rico’s father Antonello comes from Porto Torres, Sardinia, and Amalia from Casserta, Naples, and the Roman kitchen became the expression of these food cultures. Sunday lunch for thirty plus is a regular occurrence there and the travelling sons brought this knowledge of food and function to Cork where it was widely welcomed.

It made sense then that this familiarity with food would translate into business and Riccardo and Maurizio opened Buon Appetitto followed by Casanova at Triskel Arts Centre in 2001.

The style was ‘agriturismo’ where a short set menu described the season’s dishes and staples like bruschetta and antipasta plates allowed the seasonal toppings like aubergine, artichoke or baby roma tomatoes to feature on the toasted pane casareccio bread or board.

The main courses of ‘Primi’ (usually a pasta, polenta or rice dish) and ‘Secundi’ (featuring the daily special of meat, fish or vegetable) followed this tradition of allowing the harvest food to take centre stage.
Italian Rico's