WELCOME TO THE MART

Guest post by Deirdre Shaughnessy - see her blog at http://deshocks.wordpress.com/

We’re not in Kashmir anymore, Toto 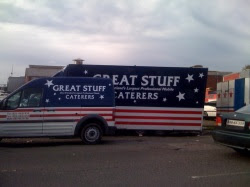 *Burgers*Chips*Curry*Salad*Cans*Chicken*
… Ponies…
… Toys…
… Carpets…
… Liquid Viagra (Free! Today only!)…
… Chickens…
… Work boots…
Welcome to the Mart. A Bank Holiday Monday Mart.
Only on Bank Holidays does the Mart – what Orla Kiely fans would call a farmers’ market, until they experience it in all its tacky, mucky, jumble sale glory – really come into its own.
Wizened, hunched-up streethawkers who could be in Kandahar or Kilmallock, dirty-looking old men, trousers held up with twine,  chubby, rosy-cheeked welly-wearing children with tracksuited knees smeared in cow dung… all of rural life is here and most of it ain’t as pretty as Fáilte Ireland would have you believe. 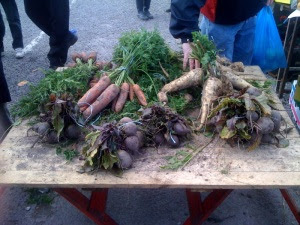 Knobbly carrots? You want 'em, we've got 'em.
Organic apples, smoked cheese, crepes and knobbly, mucky, GIY looking carrots? Down the road at the food fair, along with the Thai food stall, the gourmet sausages and the substantial burgers that appear altogether more sanitary than the greasy patties from the ancient, grumbling chip van at the gate.
This stuff is serious. Up here is where you’ll find jeeps used for their intended purpose; transporting greyhounds and baling twine, old reels of wire and bags of calfnuts. Most of them predate their shiny Celtic Tiger four-by-four cousins down near the food fair.
The real farmers, sour faced, capped, quiet men, are inside by the parade ring, fiercely concentrating on the mumble-whine of cattle prices and the tracing of who’s who, who’s where, and what’s where it shouldn’t be.
Who’s sold sites; who’s in a bit of trouble with the Department, and who’s waiting for their payment or doubling their quota. Organic apples, indeed.
While business is done inside the fun goes on outside. Travellers, pitched up for the last few days in case they’d lose their spot, are busy checking ponies’ teeth and eyeing up disturbed-looking chickens in their windblown cage at the gate. Terrier pups peer from inside ripped, ripoff Nike tracksuit tops, their teenage owner carrying a cane (all the rage these days) in his free hand.
Asian tradesmen by way of Roscommon are flogging  ’Adidas’ tracksuits and  ‘Dior’ mugs to a highly suspect – but pennywise – public. The type of public that kicks tyres and stretches seams before so much as offering a price, this is the buyer they’ve been used to at home, and there is no  surprise at being offered half the stated price for anything. Bargains is bargains, and they know they’re not in Kashmir anymore. 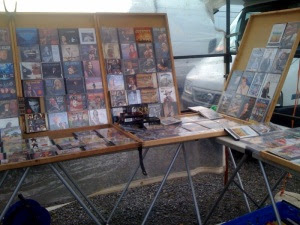 It's been a long time since that lorry accident.
Hollywood movies three for €15, battered and faded cover images of gallants and ghouls – for the season that’s in it – and even a few rare as hen’s teeth videos stacked away in the corner, for the older customer, or perhaps because the lorry they fell off had its accident a few years ago now.
Roaring trade at a stall, staffed by at least two generations of Traveller women, selling buckets, rugs and other household ware. With Chanel and Dior logos on them. For a moment I stop, taken by the beige bucket with the black Chanel double C stickers carefully dotted around them. For a joke, like. But I don’t need a bucket. 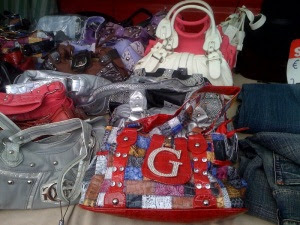 It wasn't as nice as the Chanel bucket, but there was always a handbag to be had.
Trade is alright, they tell me. Not great. But then, I might be a garda with that many questions. So, unless I’m buying that bucket, there’s no conversation to be had. The Travellers are more chatty than the foreigners, but they too can spot a mere observer. That jingle in my pocket is likely to stay there – my jeans and Converse give me away as a food fair native and merely a curio tourist at their show.
They don’t seem to mix, really, but it’s hard to see who does. They stick to their own patch; not like the food fair where the fudge man is busily quaffing the spiced apple juice of his neighbour and ignoring the middle-aged woman (two dogs, and plenty of money – the real salesmen down at the mart would’ve pounced on her) eyeing up his fudge.
The Eastender selling liquid Viagra like a Wild West snakeoil salesman, is armed with a smooth patter and amplified with a collar mic, to add to wild gesticulation and an unnerving habit of casting luminous-packaged products like pearls before the assembled hysterics. He’s selling  ’designer’ perfume too, “Twenty pounds only today!”
An Alfie Moon-alike, he’d want to watch out before the lad at the IRA stall beside him gives him a clatter for his lack of awareness that we are in a Republic. Four flags, some unfamiliar but all guaranteed 100% Republican,  ‘Ra songs playing on loudspeaker and multiple copies of the Proclamation in lurid frames testify that business is booming on the green market.
This, then, is country life.
Guest