Four smashing stouts to enjoy in mid-winter (not that you have to confine yourself to any one season!)

This is the second post in CorkBillyBeers, a new series (we got to over 130 post in the previous series A Quart of Ale) and again will be trying to get beers from all over the country, including from small breweries who may not be able to produce specials every week, so lots of core beers to be included.

Some weeks, the focus may be on one brewery, another week may concentrate on a style - like this one on stout. Again, it will be mostly Irish beer but I will throw in a "visitor" from time to time!

Four smashing stouts to enjoy in mid-winter (not that you have to confine yourself to any one season!) 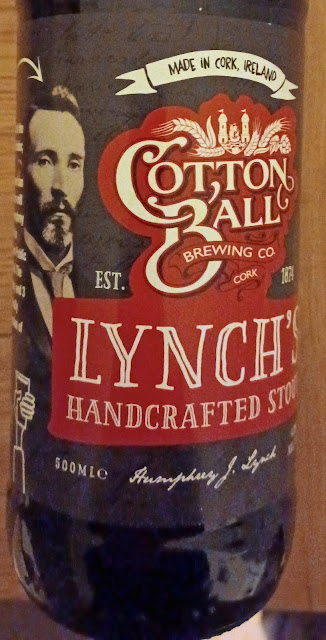 Black, a very definite opaque one, is the colour here with a soft tan head. The ABV of 4.3 is very much in the 4% to 6.5% of the style and the finish is dry, not sweet, so no bother in calling this a dry Irish stout. Roasted malt (including coffee)  lead the aromas. They are also found on the palate along with caramel and cacao plus a streak of light fresh fruitiness. And yes, it does finish dry, and long. Indeed that finish, along with its flavour and smoothness, combine in an excellent stout.

Humphrey Lynch, an American Civil War veteran and a cotton mill foreman, returned to his native Cork in 1874 to set up his own public house which he called the Cotton Ball. It is still here today and the current generation are brewing a selection of craft beers named after their great great grandfather who left the West Cork countryside as a teenager. The brewery was founded in 2013.

Hand crafted from five malts and traditional flaked barley, moderately bittered and late hopped with US and New Zealand hops, they say: “This stout is as dark as our great grandfather Humphrey’s black humour and has a warm and mature flavour. With a phenomenal marriage of coffee roast, caramel lush, balanced by a clean bitterness exploding into a tangerine, mandarin aromatic delivery.`’

They reckon it’s a great accompaniment for hearty meat dishes, stews and steaks. But, with a shameless piece of name dropping, they say that the ultimate food pairing is our Famous Cousins’ Clonakilty Black pudding! Might as well let you know that I’m a neighbour of the Cotton Ball. Not a frequent visitor (at least not as frequent as I once was) but my order is always for the Lynch’s Stout.

Really excellent seasonal. No bells and whistles. Nothing added to  this well made stout but a single origin coffee.

This is a regular Christmas stout from Dungarvan, now into its second decade. Oatmeal though has been used in stout since the late 1800s according to Mark Dredge’s Beer. “It was brewed and marketed as a nourishing drink for convalescents and invalids.”

When I was growing up, an adult would stick a hot poker into a mix of stout and milk and give it to an ailing child as a tonic. A few years on and, after a hard night's training, the club officials would have a pint of milk and stout as a pick-me up. Never won anything with that club though!

They say: This classic oatmeal stout is made with oats from Flahavan’s Mills in Kilmacthomas and infused with a single origin coffee - the annual release generally signifies the beginning of the yuletide season for many. Yuletide is a term I’ve rarely heard around here, except in Christmas songs!

Dungarvan brewer Tom says “there’s usually a bit of trial and error as we try to find the sweet spot. The beans that produce a nice cup may not necessarily work well in the stout blend."

The current Dungarvan seasonal is black with a foamy tan head. Smell it and also stick your finger into the head for an early sweetish taste! I’ve been a fan of this Christmas stout since its first appearance. It is as smooth as ever with citrus and berry notes from the coffee giving a lift and adding a rich warmth to the roasted dryness.

More malty sweet than hops bitter, a smooth and lovely companion for the weeks ahead as it’s great with earthy casseroles or desserts. It is great to cook or bake with as it doesn’t have the same bitterness as other stouts.  Goes well with blue cheese as you need something that will hold up to the strong flavour of the cheese. Also works with smoked hard cheddar and other fuller flavoured cheeses.

Can conditioned - so expect a harmless yeast sediment.

Down Waterford way they have their own way of doing things. Anyone fancy a large bottle? For instance. No large bottle of this stout but they have a surprising enough serving tip too: Ideally this stout should be served in the traditional south eastern way which is ‘off the shelf’ — ie. at room temperature.

“The Community Brew Project invites Craic members to decide what beer styles they'd like to see brewed most. Stout was the overwhelming winner this time around, so we approached our friends in Lineman who we knew would be the perfect brewery for the job!” A good choice and this very acceptable Pulse Irish Extra Stout is the result!

It is of course black. And has a lasting tan head. And the aromas are of toasty malt, caramel included. Like the freshness of this one, the caramel and coffee in the complex palate, full of flavour right through to the dry finish. The labels sums it up as “a full-flavoured stout that will leave you wanting more”. Hard to argue with that.

Craic champions independent Irish beer, and showcases the amazing talents of brewers all across Ireland. The aim of Craic is to provide a welcoming space where beer fans can chat, learn about beer, and connect with others. Join us to expand your beer knowledge, engage with our community of beer fans, and have a bit of craic while you’re at it. Connect with us through our community platform, on social media, and via our podcast. 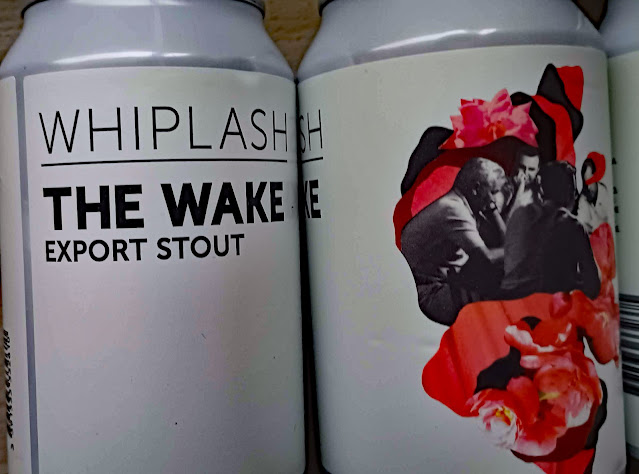 Black, like newly laid tarmac, with a soft tan head that’s slow enough to shift. Aromas of lightly roasted coffee and chocolate may be mild but they are persistent. And what follows on the impressive palate is not a million miles away, flavours of lightly toasted bread, plus a lick of cherry across those lips, coffee is never that far away as this quite hefty stout waltzes smoothly on its way to a merry, dry and rather marvellous finalé. May I have the next dance also, please!

That’s my immediate reaction to The Wake, (hardly a dancing occasion, getting my metaphors mixed up). The Whiplash crew, rarely slow to offer advice, are a tad shy here: “… while we don’t want to tell you how to drink your beer, we’d highly recommend this one on a cold evening in front of an open fire.” That could be arranged as could a case of this black beauty.

Thanks you Whiplash. Enjoy The Wake and Happy Christmas.