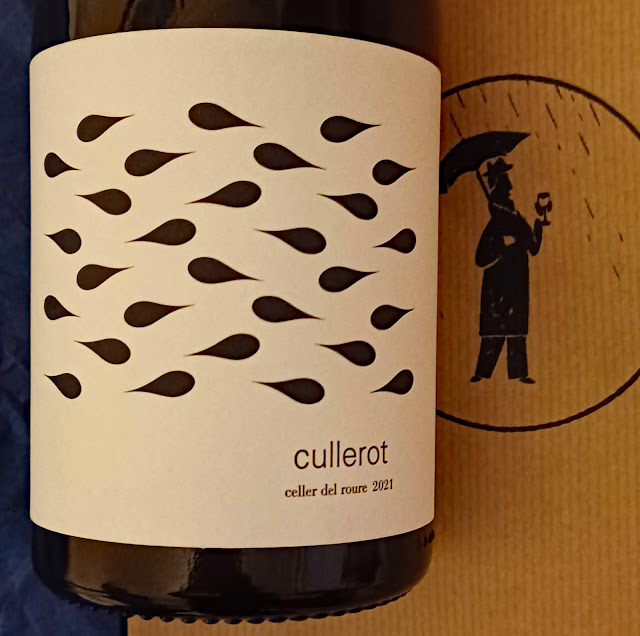 Cullerot is a white wine from the D.O. Valencia. produced by Celler del Roure. It is a blend of different grape varieties: 30% Macabeo, 30% Pedro Ximénez, 10% Chardonnay, 10% Malvasía, 10% Merseguera, 10% Verdil. Haven’t heard of the last two before.

The wine is aged mostly in clay amphora (6 months) , a method which follows ancient winemaking traditions, and provides Cullerot with “a truly complex and unique character”. It is a blend and method that works very well indeed.

Straw yellow is the colour, clean and bright. It’s got a very interesting nose indeed, fruity, floral and herbaceous. Entry is impressive, fresh and packed with fruit flavour; it is well balanced thanks to a sharp acidity, has a beautiful texture and finishes strong and long. Very Highly Recommended.

The producers suggest serving it at 7 degrees (others say 8 to 10) with rice dishes. Others, including the Wine Society, indicate Gazpacho, Prawns, Spaghetti Puttanesca, Olives, Shellfish risotto, Salads, Aperitifs, Rice with fish, white fish, and shellfish.

Celler del Roure, founded in 1996, is a small family winery which works with the utmost care on every inch of land. The winery also keeps its eye on the future, collaborating on various projects with the Universitat Politècnica de València.

The use of large clay amphorae may be unusual in Spain but not so in other ancient wine countries such as Georgia. Celler del Roure’s utilisation of them is a nod to the tradition as well as a means of aging without oak influence.

I bought this bottle from the relatively new MacCurtain Wine Cellar in Cork. Co-owner Sean Gargano has visited the winery and been very impressed: "We love pretty much everything from Celler del Roure. Owner Pablo Calatayud is doing heroic work bringing local Valencian varieties back into fashion. He gets help in the cellar from Javi Revert, one of Spain brightest wine makers."

"Watch out for Valencia to become a player in the near future. And if you see Celler del Roure be it red, white or rosé, buy it.  Prices are guaranteed to go up when they get the recognition they deserve."
Watch this space! The town of Chinon and its surrounds is the heartland of Cabernet Franc in the Loire Valley; this one though comes from Sancerre (a few hours, along the valley, to the east), an area best known for its eponymous Sauvignon Blanc.

Freshness is taken for granted with Loire Cabernet Franc and this one certainly has it. It’s also got the fruit, both in the aromas and on the palate, lots of lighter berries (raspberries and strawberries) plus darker (blackcurrant and blackberry) as well, and there are hints of spice. The lingering finish is along the same lines. That wonderful freshness keeps it light and easy drinking. Indeed, it may be served slightly chilled but you’ll hardly need to do that this time of year. A Highly Recommended wine.

We had a beautiful plate of Organic Kerry Wild Meat at a recent meal in Kinsale’s Rare and I reckon this Cabernet Franc would have been a terrific match. And the winery’s list of suggestions includes the French version as you can see: fowl or other white meats are perfect as a wide range of prepared cold meats such as a plate of French “charcuterie”. Could go well with the turkey!

No mention of Chavignol goats cheese. Chavignol because that is the area where producer Henri Bourgeois is based. It is a renowned 10th generation winemaking family, making exquisite award-winning wines from some of the best terroir in the Loire Valley.

A few years back I was in Chinon and failed to drink a glass of Cabernet Franc! And that meant I didn’t quite make the cut for membership when I visited the Caves Painctes of Chinon, the headquarters of the Confrerie de Bons Entonneurs Rabelaisiens, situated in a network of subterranean tunnels running beneath the town’s chateau. You have to drink a glass of wine. What’s the problem? You may well ask. The problem is the glass takes a whole bottle and you must finish it without a pause!

Chinon (and include nearby Bourgueil) is a terrific visit, especially if you go late August/early September. Our highlight was a day-long vintage fair with an old fashioned threshing. Thirsty work and that’s why we withdrew from the streets for a spell to Caves Painctes.

* Most of you will know that Cabernet Franc appears in Bordeaux red blends where, more often than not, Cabernet Sauvignon and Merlot take the lead roles.