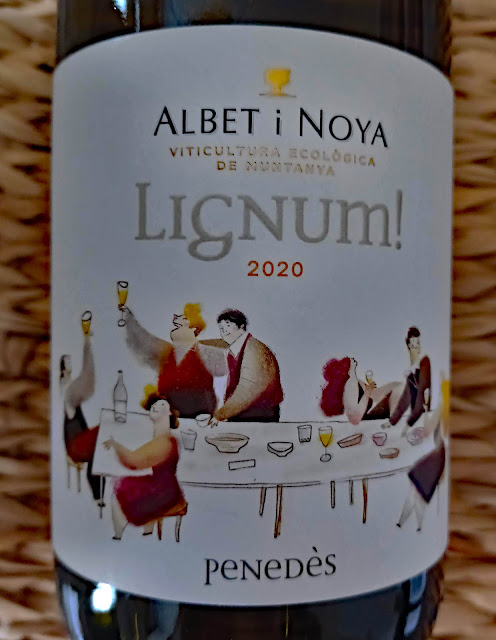 Light straw is the colour of this  Catalonian blend. The moderate aromas, of moderate intensity, give up floral notes along with exotic fruits and a touch of oak. In the mouth it is surprisingly rich and complex, with notes of peach and citrus, and with a long lingering finish. Highly Recommended.

The blend is off Xarel-lo, Sauvignon Blanc and Chardonnay and they come together very well indeed. The winery itself says: There are two sides to this wine. The Sauvignon gives it a perfumed, floral nose. Xarel·lo and Chardonnay together with a hint of oak (where the Chardonnay spends 2 months) give it a little body and complexity in the mouth with a long finish.

Xarel-lo, a high-yielding white grape, is best known as the main grape in the Cava blend. Mostly found in Cataluña where Albert i Noya is regarded as one of its best producers (according to Grapes and Wines).

This organic Catalonian wine is quite versatile at the table, particularly with food from the “whiter” side such as Vegetables, Salads, White fish, Rice dishes, and Seafood and, also, as aperitif. Serve at 18 degrees.

In 1903, during the phylloxera crisis, “our great great grandfather, Joan Albet i Rovirosa, arrived in the Penedès to work the the vineyards at the Can Vendrell de la Codina estate, in Sant Pau d’Ordal”. And this is where the company still operates.

In the late seventies “an opportunity knocked on our door and, restless as ever, we decided to embrace it. A Danish company was searching the Penedes for an organic wine grower. Nobody had ever heard of organic wines. But curiosity won us over and that's how we threw ourselves into this adventure.”

Josep Maria Albet i Noya decided to try one of the vineyards, despite doubts from friends and family. But it worked out well and encouraged him to extend the practice. Healthier vines and healthier wines are the result. The winery is well known for this white and also for its red equivalent also known as Lignum! 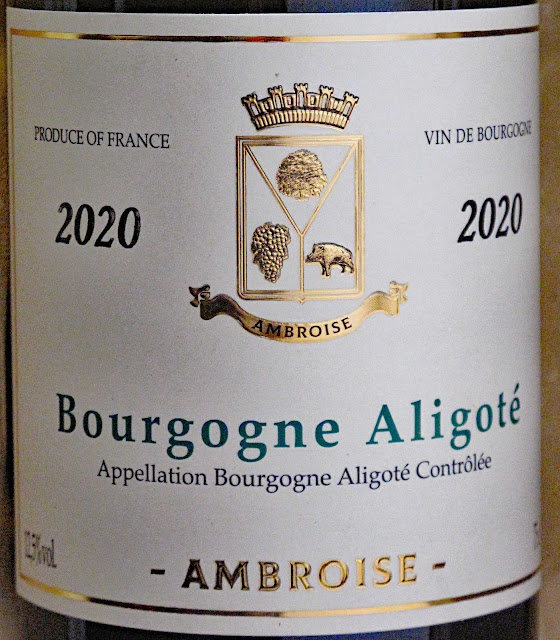 Colour is mid-gold and it is clear as crystal. The aromatics are modest, citrus and floral. There’s a creamy texture. The fruit, fresh and tangy citrus, impresses, with a streak of minerality, all the way to an excellent finish. Not a Chardonnay but a very engaging white Burgundy and very well priced as well. Produced from vines located in the town of Premeaux Prissey, this cuvée aged in vats for 10 month.

Aligoté is Burgundy’s second white grape and doesn’t really get much of a vote of confidence in its few paragraphs in Grapes & Wines but Le Caveau, importers of this bottle, report that is making a comeback lately and that our bottle “is quite a delicious example of this variety”.

Back in 2017, in St Peter’s Church (not the one in Rome but the one in Cork’s North Main Street,), I was delighted to have the chance to chat to Bertrand Ambroise and taste his delicious Burgundy wines. Organic farming is a way of life for the Ambroise family. I have been a fan of the wines for quite a while but this is my first Aligoté from them. It is a good one and Highly Recommended, especially with any creamy sauce, or shared in the garden with some cheeses and meats.

Maison Ambroise is a long established, small négociant house, who operates on 21 hectares of their own vineyards and purchase grapes from another three. They own vines in Prémeaux (where the grapes for this one grow), Nuits-St-Georges, Ladoix, Meursault, the hill of Corton, Vosne-Romanée (with some Grand Cru Echezeaux!), Gevrey-Chambertin, Vougeot, Beaune and as far as Saint-Romain.

Bertrand Ambroise was relatively recently joined by his son Francois and daughter Ludivine, they received their organic certification (2013). Ludivine explained the move to organic viticulture is one of true belief as she lost her grand-father due to illness caused by chemicals used in the fields.