Third Barrel are busy these days: “The UK are going through Prime Ministers like we go through beer specials..”

Like their previous two Day Drinkin beers, this Revenge of the Hops weighs in at just four per cent, and is aimed at the session drinker though I’m sure quite a few other beer drinkers would enjoy it.

It has a pale orange colour and it’s murky in there. The label “forecasts” aromas of grapefruit, raspberry and sweet candy. Grapefruit yes but I’ve found the others elusive! It is pretty big and bold in the mouth where the grapefruit also leads the refreshing charge along with peach and banana.

A duo of hops boot this on. One is HBC 630, an experimental hop from the Yakima Valley. It is recommended for Wheat Ale, Golden Ale, American style lagers, Pale Ales, India Pale Lager (IPL), India Pale Ale (IPA), Session IPA, New England IPA, Hazy IPA, Imperial IPA. The other hop listed is the well-known Mosaic, a contributor to the tropical notes.

The carbon produced in the making of this beer has been offset by planting native Irish trees.

Our reviews on the other Day Drinkin beers 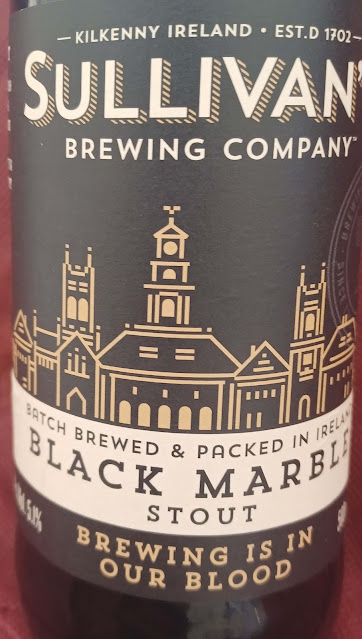 That is the encouragement on the bottle’s label, so let's have a taste… Black as Kilkenny marble for sure and with a soft floppy tan head that sinks rather slowly. Light coffee aromas and fruity notes also rise from the glass. And they get to tango on the palate, a melange of dancing flavours and sharp acidity waking up the taste buds, and keeping the show going, generously throwing in an encore or two at the finale. If the O’Shea’s (below) is mid-table, this neighbouring stout is championship material.

The hops used are Admiral, Magnum, Goldings and Sullivan’s say it is delicious with roasts and cheese dishes.

Did you know that Sullivan’s were brewing in Kilkenny before Smithwick’s? And then the two got intertwined?

1702 Sullivan’s Brewing Company is established, and grows to be biggest in the area

2014 Diageo relocates Smithwick’s to Dublin, marking the first time in 800 years that Kilkenny is without a commercial brewery 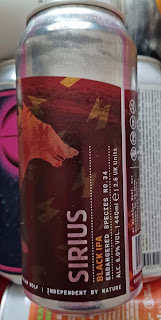 Not too sure if the Sirius of the name refers to Sirius the brightest star in the night sky or to Sirius Black a character in Harry Potter. Probably not after the famous steamship Sirius, well-known in Cork in the 19th century and the first of its kind to cross the Atlantic.

In any case, the beer is black, black as night, with a tan head.  Aromas are quiet, just some faint floral and even fainter spice notes coming through. It is much more assertive in the mouth though,  with a backbone of milk chocolate, coffee and roast malt flavours. There’s a posse of malts in this one.

No shortage of hops either with no less than four, all from the USA, employed combining to give flavours of passion fruit, subtle orange and an earthy resinous bitterness. One to make those taste buds sit up and take notice.

They say: “A magical Black IPA, Sirius was brewed with a robust malt bill to provide strong depth of flavour and colour to the beer. This robust malt bill gives the beer a dark opaque appearance… .Sirius is a West Coast style Black IPA that was double dry hopped with a massive amount of Amarillo, Simcoe and Strata hops.”

"The endangered species brews are a series of small batch, limited edition crafted beers. These beers are so rare that only a lucky few will get to experience them in the wild before they become extinct." This is #34 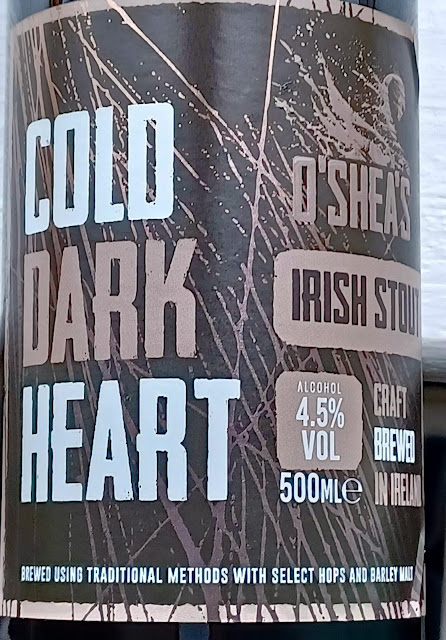 Seldom easy to find detailed info on supermarket beers and this is no exception. But you’ll read this line on the neck: Traditional Dry Irish Stout bursting with flavours of coffee and chocolate.

Okay. Pours out into the glass as black as midnight with a tan head (short-lived). That coffee and chocolate seep out of the glass and there’s a toasty note as well.

While named O’Shea’s, it is made by Carlow Brewing who also make O’Hara's beers (including some really excellent stouts). It could be a bit more full-bodied, more robust, on the palate and it continues to a reasonably dry if shortish finish.  That coffee/chocolate duet persists to the end but it needs a bit more to shift it out of mid-table. 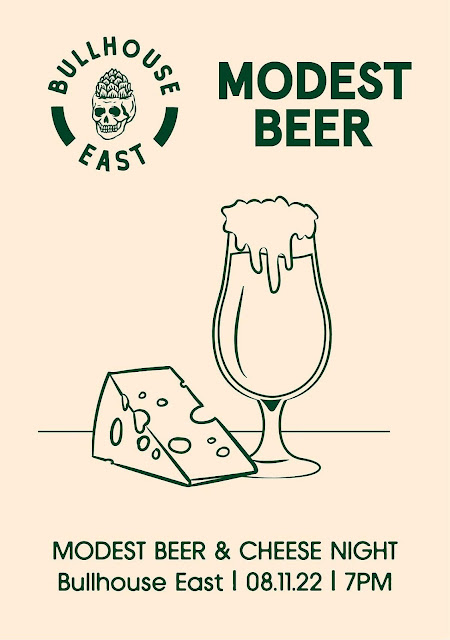 Irish Night in LimerickEvery Thursday, 8PMIrish Night happens every Thursday from 8PM. It’s a great chance to use your cúpla focail in a supportive environment. Any level of the Irish language is welcome, from total beginners to fluent speakers. It's been said that it's easier the more pints you've had!