A Duo Of Excellent Whites From North-West Spain. Monterrei and Rias Baixas

A Duo Of Excellent Whites From North-West Spain 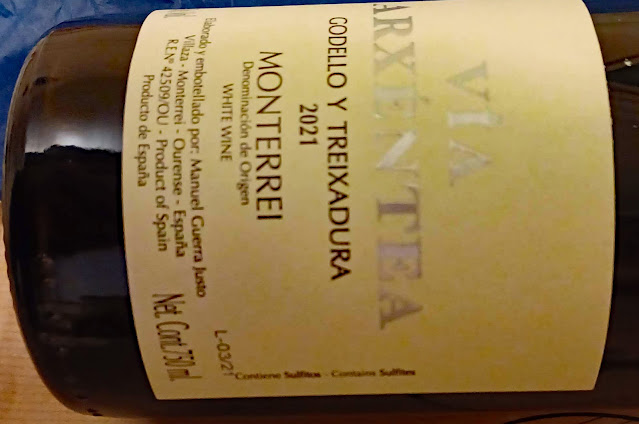 This is a Spanish white wine with a marked varietal character. Made with Godello and Treixadura, both native Galician varieties, to transmit those aromas and flavours that our land, climate and fruits are capable of producing.

That’s part of the info on the label of this blend produced by Via Arxéntea in Monterrei in North West Spain.

It has a bright yellow colour and it is certainly aromatic, apple, peach (especially) and mango to the fore; notes of citrus also. The intensity is also evident on the palate where flavours are bold but balanced by an excellent acidity. There is a long and fruity aftertaste, with a faint sweet sensation never too far away.

The DO Monterrei is in the province of Ourense, close to the Portuguese border. Most of its wine is white and most of that is based on Godello (which is also called Verdello); other varieties of white grapes here are the autochthonous Doña Blanca  and Treixadura.

Godello is quite possibly the most scented of the newly fashionable white varieties in Spain’s far north-west, according to Grapes and Wines. “Almost extinct in the 1970s, it is now flourishing in Valdeorras.” Valdeorras is also in Ourense.

Early ripening Treixadura is one of the grapes that blends well with Godello. In Portugal, where it is called Tradajura, it adds crisp, citrus characters to Vinho Verde.

The MacCurtain Wine Cellar, owned by Trudy Ahern and Sean Gargano, is essentially a wine shop where you may select your purchases from a huge wall of wine. Don't worry though, you'll have lots of excellent advice, given with knowledge and a rare enthusiasm, not to mention charm.

If you wish to drink on the premises, that is no problem in the evenings. And while wine is their priority, they also provide some very tasty small plates and sharing boards as well. Such a poremises is known as a Cave à Manger in France.

There is a the fantastic range, all organic, biodynamic or natural. I picked the Godello and Treixadura blend from Monterrei while Sean suggested the Celler del Roure Cullerot Blanco (toi feature in a later post!). He was very enthusiastic about this winemaker and about the future of wines from the Valencia area. 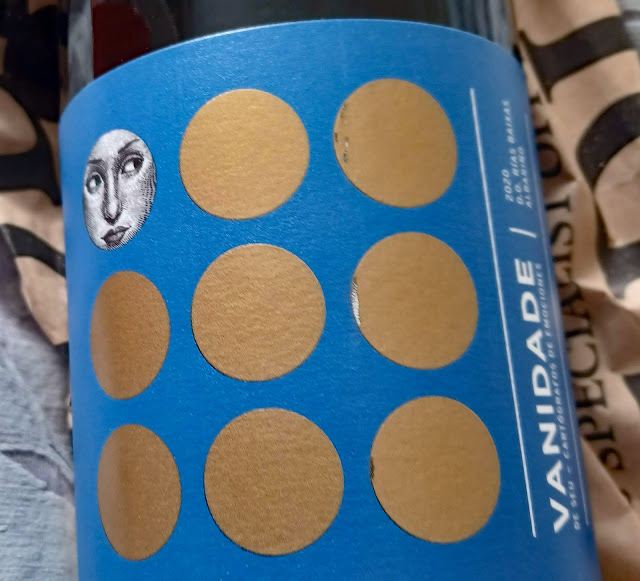 Did you know that we Irish are the fourth largest importers of Albariño in the world? It comes from our Celtic cousins in Galicia, in Spain’s Rias Baixas region. It has all happened quickly and relatively recently.

“It is a young industry,” said Lynne Coyle MW, one of our hosts at a Rias Baixas Tasting in L’Atitude during the summer. “In 1975 there were just 200 hectares of Albariño here, now there are over 4,000, lots of small holdings.

Val de Salnés is the main region. And it is from here and its granite soil that this wine by Vina Almirante comes. That ocean influence is evident in this dry crisp and elegant wine.

The Vanidade has a beautiful and inviting gold colour. Citrus and peach notes in the aromas. Those fruits also feature on the intensely flavoured palate, fresh and zesty, no shortage of acidity,  with a slightly salty tang, plus the starting fruit all the way through to a clean and refreshing finish.

You don’t get many poor  examples of Albariño but this is outstanding and you are thinking straightaway of matching it with seafood and white fish. See for yourself why Albariño became so popular so quickly. Very Highly Recommended.

Vanidade translates as vanity. I’m very happy with this one and so too are the producers: “Very tasty, very good, wonderful. This is Vanidade, a wine of which we are particularly proud. Both because its organoleptic properties and tasting ratings, and because it’s a champion of cultural change in our time.”

Vain? Proud? Not you? Take a look at the producers site where they have a vanity test ready and waiting. Up for a bit of fun? Click here.”

Importers Findlaters tell us that Vina Almirante is one of the most important wineries in North West Spain. “Its properties are in the borough of Portas in the Caldas de Reis region situated in the northern part of Salnes Valley. These legendary vineyards, which extend over the 35 hectares, are treated with tender loving care and in keeping with state-of-the-art wine growing techniques. The wines.., are distinguished by the faithful reflection of a late autumn harvest, giving rise to a macerated wine endowed with brilliant notes of freshness, elegance and an intense flavour that’s sure to please even the most demanding of palates.”