A Quart of Ale± #74. On the craft journey with a session of Lineman, Dead Centre and Eight Degrees

On the craft journey with a session of Lineman, Dead Centre and Eight Degrees 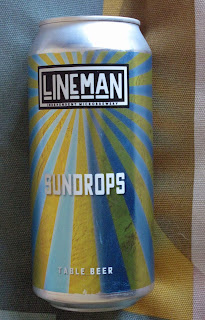 A low abv beer, this from Lineman, a Dublin based independent brewery.

Sundrops is the name and the colour is sunny, with much haze about.  The head sinks without too much delay. Aromas are rather special, thanks to the hops and yeast from down under. The Ozzie hop Topaz is bright and breezy and an efficient bittering agent while Nelson Sauvin, pretty popular these days, is known for its exotic fruits.

Sauvin is, I’ve read, shorthand for the white wine grape Sauvignon blanc (popular in New Zealand), and this beer certainly makes both the olfactory organs and the palate buds sit up and take notice before a lip-licking finish. All this with an abv of just 3.3!

They are touting it as “A fantastically balanced sessionable beer” and I wouldn’t disagree! It is available in 440ml cans, is unpasteurised and unfiltered. Suitable for vegans.

A good early whiff of hoppy citrus indicates that this Teeny Tiny will be no weakling on the flavour side. Teeny Tiny, with its cloudy orange-y colour is, as its Athlone producers insist, ”a small but perfectly formed New England IPA”.

Fresh and indeed loaded with flavour and an excellent balance between hops and sweet honey malt, I’d be happy to imbibe a few of these on a session or slip one or two in between some heavyweights.

Hops used are Citra, El Dorado and Idaho7 and its quite a beer at 3.3abv.

They say: Fresh, flavoursome and (wherever possibly) local ingredients are what give our beer its character. Cutting corners here is not an option at Dead Centre Brewing. We believe you get out what you put in…so only the best goes in.

Dead Centre have installed a beautiful copper clad brewery in their Brew Pub right on the banks of the River Shannon. “Serving a full range of wines, gins, soft drinks teas and coffees…our focus is first and foremost on great quality craft beer from our own brewery as well as local, guest breweries."

The brewpub is casual, laid-back and chilled. "We have four Dead Centre taps constantly pouring as well as 4 guest taps to make sure we always have a wide and interesting range available at the bar.” 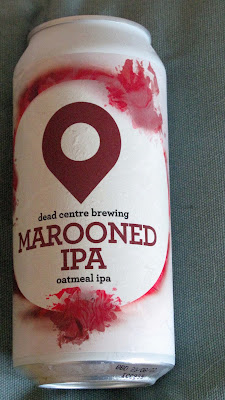 An amber orange body topped with a foamy white head that tends to stick around, even from the can. Citrus elements figure in the aromas and on the smooth palate too and here the brewers give much credit to the locally grown and certified organic Kilbeggan oats. Flavours tend towards orange zest in the mouth before a classic bitterness takes over towards the dry finale.

Dead Centre is Westmeath’s first and only craft brewery. “Marooned, our flagship beer, has a silky smooth body, a result of using locally grown and certified organic Kilbeggan oats. This simple malt base delivers outstanding mouthfeel and gives the hops a perfect platform to shine.” 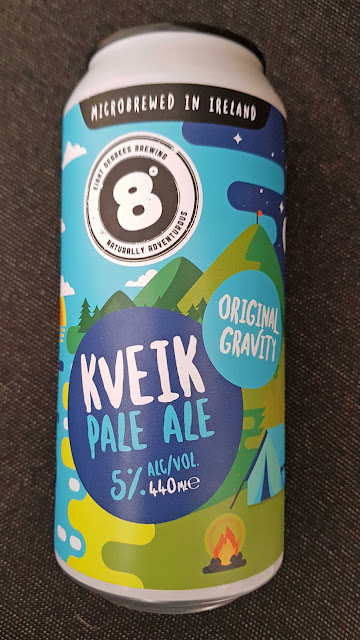 This Pale Ale is named after a unique Norwegian Kveik that produces a tropical flavour and complex aroma. And I’m not talking about hops here. Kveik is a yeast. American Ale Yeast and the British Brett may be tops of the pops in yeast but Kveik is coming up fast, another illustration that “brewers and beer drinkers owe everything to these single-celled fungi”, that quote from Craft Beer for the Geeks. Yeast is responsible for many of the flavour compounds in beer including floral, fruity and spicy notes.

Back to our glass. Colour is a hazy dark gold and a fluffy white head lingers. Aromas are mostly tropical. Tropical also on the palate, multi-layered with  tangerine and pineapple getting a turn as the sips roll softly in. Slightly spicy too and there’s a good dry finish. Very quaffable indeed and highly satisfactory.

They say: It is packed full of Mandarina Bavaria, Cascade and Simcoe hops: lots of fruit and citrus flavours, with a backbone of grapefruit and pine. We’re adding Hornindal Kveik to the mix, a Norwegian yeast that brings some lovely tropical esters to the party. Dry hopped with HBC 522 and HBC 630. (Terrible names, great hops).

This is the second of their 2021 Original Gravity series which celebrates ten years in business for the Mitchelstown brewery. They ran a competition looking for artworks and the winners are featured on this series of five limited beer releases, giving emerging artists a can-sized exhibition space.

The Kveik Pale Ale design comes from with Michael Donnelly of Woolly Mammoth. Michael’s joy at getting out into the great outdoors after the lockdowns is reflected in his design which “depicts the beauty that this country has to offer and the amount of activities we can do…”. Discover more of his work on Instagram:  @woollymammothdesign

Smooth, snappy and just right for an aperitivo. Puglian taralli – those curled up, crunchy little breadstick bites, especially good when flavoured with fennel – are a great pre-dinner nibble to have alongside this beer. Make up a platter of your favourite crostini (topped with ’nduja and crushed peas) or bruschetta (tomato and aged balsamic for the win) to contrast with the tropical fruit flavours. If you’re heading into the great outdoors with this beer, try it with halloumi burgers, campfire fish tacos or a barbecued steak with piquant salsa verde.