A Quart of Ale± #71. Craft session in the south-west with Killarney, Clonakilty and 9 White Deer

On craft journey to the south-west with Killarney, Clonakilty and 9 White Deer 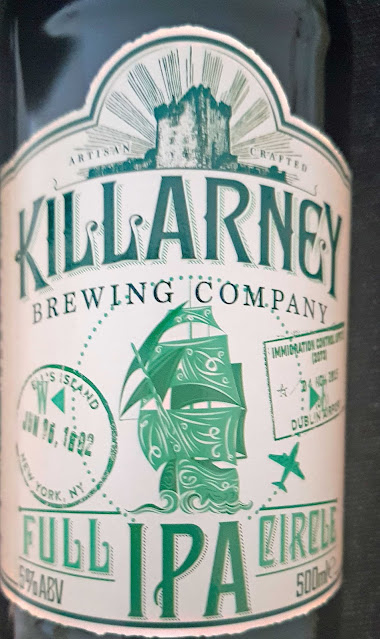 Colour is close to amber. All American hops are used here and the aromas make that clear from the moment you flip the cap. The soft head collapses soon enough onto the slight hazy body. The hops are not identified on the label but the ensemble brings quite a current of deep flavour with dry bitterness (IBU is 42) clearly displayed at the finalé. Easy to see why it is now part of their core range. No pairings seen but I found it very compatible with a mature cheddar (Kilmeaden, I think!),

Full Circle? Emigration has forever been at the heart of Irish history.  From the mid 1800’s onwards, generations left these shores destined for the land of opportunity.  Over a century on, life’s journey has come full circle and their progeny are returning home.  This is a story held by our Head Brewer Mike, who with his wife and daughter, have brought back to Kerry this USA branch of their family tree.

The big news though is their new facility (brewery and distillery) out in Fossa is looking more impressive every day. “The team are working hard and know we are one step closer every day. As Tim O’D, one of our founders, would say we haven’t been drinking a lot of beer, just a lot of coffee!' Make sure to stay tuned on our journey by watching our Distilling the Dream Vlogs on our YouTube channel!"

The new building includes salvaged red brick imported directly from the Windy City of Chicago. If they could talk, no doubt an Irish accent could be heard in the original laying. They now take pride of place in the main stairwell of the new visitor centre. 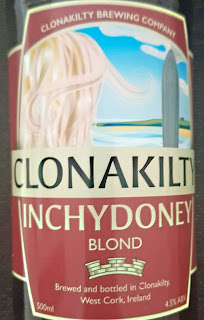 An inviting cornfield gold is the colour of this Witbier from Clonakilty Brewing Company. It starts with a big soft white head. And no shortage of carbonation. A gentle citrus in the aromas and also on the palate. Perhaps the most striking thing on initial contact is the refreshment factor which is high, right through to the lip-licking finish. Good mouthfeel too.

The brewery recommends it as an excellent accompaniment to fish dishes, Summer salads and light cheeses. And I can confirm that it went very well a few months back with my superb John Dory dish in the Liss Ard Estate (not a million miles from Clon).

The label recommends pouring this light and crisp Belgian Wit slowly for a smooth creamy head. Contains yeast sediment. Enjoy chilled. Ingredients do, of course, include wheat (no mention of orange peel or coriander though).

They say: “We are passionate about making beer with no compromise, brewing small batches with big personality. Using locally sourced grains, the best hops and water from our own well, our beers are handcrafted with care in our brewhouse in Clonakilty by head brewer ‘Thirsty’ Frank Fredriksen and his team.”

Inchydoney Island is steeped in history. From the Battle of Clonakilty in 1642, when fleeing Irish forces drowned while trying to find refuge on the island. No longer an island but joined to the mainland by causeways, Inchydoney’s golden beaches are a haven for surfers and inspired our crisp blonde refreshing beer for long Summer days and BBQ’s 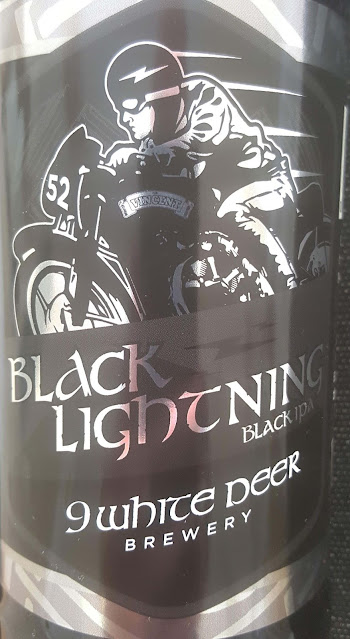 Black as the middle of a vat of Follain blackberry jam, with a head coloured like a cappuccino. There’s a roasty toasty edge to the aromatics. And that edge continues onwards to wake up any sleepy taste buds. Now the fully engaged palate can appreciate the posse of hops here. Brewer Gordon: “This Black IPA is triple hopped with huge hop volumes of all the American hops expected of the style.”

So hops galore as the malt plays a background role. The IBU is a high 52. But for all that, there is quite a balance and the brewery gives credit for that to the fact that they adjusted the water profile “to make the hops seem more rounded rather than sharp and harsh which can easily happen when using so much hops”.

Does the name tell us something? “Black Lightning is hopped from the mash to the fermentor. We use Willamette, Chinook, Cascade, Summit and Centennial hops in very large volumes, about 100% more than a regular beer, but we don’t make it too bitter. It is an intensely hoppy and powerful beer. Like the legendary motorbike Vincent Black Lightning 1952, this beer needs to be handled with care.”

The brewery 9 White Deer is nestled in the heart of West Cork making the highest quality Irish beers. “We have a range of uniquely crafted beers; our renowned pale ale, a beautiful Irish red ale, an award winning black IPA, the best stout you’ve ever tasted, our balanced IPA and seasonals such as our Pilsner Ól-e. Everything we do is 100% gluten free.”

A cracking beer, well balanced, like the Euro football game that has just finished: Leicester 2 Napoli 2. Should have taken it to Kinsale for a head to head! 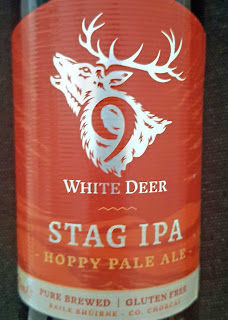 Amber is the colour of this gluten free IPA (the first GF produced in the country) from West Cork. There’s a frothy white head that sinks slowly when the beer is poured from the bottle. Aromas (citrus and floral notes) hint of malt and hops.

It is an immediate and big presence on the palate, full of flavour, some from the late hop usage in the boil, but there’s no long lasting bitterness here, just a well balanced easy drinking IPA with engaging flavour and aroma and a lip smacking refreshment factor.

“Vast quantities of hops” no doubt but the malt holds its end up well too in this excellent beer.