A Quart of Ale± #73. On the craft journey with a session at Crew in Limerick

On the craft journey with a session at Crew in Limerick

What have we here? I’m asking myself as I study the tap menu. I see Adelaide Amber, Polly, Annie Brown Ale, Vanilla Milk Stout and Eoghan’s Porter.

We are in the Crew Bar and Brewery in Thomas Street, Limerick, and all these beers, all by Crew, are available from tanks behind the counter. And there’s more on tap including beers by Yellowbelly and Porterhouse. And choices keep rotating.

Crew support more than just other brewers. Only the previous weekend, they celebrated their first birthday here with a night of good beer and great fun, and in the process raised some €1,110.78 for the local Rape Crisis Centre.

We got a warm welcome in from the showers and soon got the lowdown on the menu and decided to go through all five of their own beers.

First up was the self explanatory Adelaide Amber (4.3%), an amber ale, nice and light and very drinkable. Not too sure where the Adelaide comes in as this is more or less an American amber.

While CL was delighted with this (plenty of sharing going on!), my first pick was the Annie Brown Ale (5.25%). Must say I loved it, full of flavour and one to take your time with. And the name? Well it is named for much beloved Crew staff member Annie Brown. It is a big, smooth, chocolate-forward brown ale with toffee, spice, dark fruit and a touch of citrus American hop character in the background.

My next beer was the Eoghan’s Vanilla Milk Stout at 4.6% abv. It is what it says. A sweet milk stout with caramel, chocolate and coffee notes, and heaps of vanilla. Flavours much the same as the aromas, all before a surprisingly dry finish. Thumbs up again. Do they make any duds here? I doubt it. We certainly didn’t find any.

We kept finding top class beers and two stars remained. CL was a bit apprehensive about trying Polly at 6.00%. Polly? We asked. “It is the successor to our simple named IPA2 and the recipe is slightly changed, more hazy.” CL initially voiced a preference for the Amber but soon changed her tune as the tropical fruit, especially the pineapple, came through and true here with amazing precision. An absolute star for sure.

Their description: The beer formerly known as IPA #2! We took everything we've learned in the last year since we first brewed IPA #2 and used it to tweak and improve the process and recipe. The result is an even more intense juicy fruit character with a little more sweetness to balance the bitterness. To celebrate, we gave this hugely popular beer a real name - Polly. Rest in peace IPA #2, you served us well.

And we said goodbye with another dark one in the shape of Eoghan’s Porter Vanilla Espresso (6.1%). Tall dark and smooth as Eoghan himself, a great friend of Crew “who made a lot of this project possible”. It features vanilla, espresso, caramel, chocolate and dark fruits. Has a mild hop bitterness balanced by malt sweetness”. Class in a glass.

* By the way, if you come in feeling hunrgry, Crew have the solution.  Pizza fresh from Mamma Mia (William Street), can be added to your bill at Crew and delivered to your table Monday to Thursday 5pm to 10.30pm, Friday to Sunday 3pm to 10.30pm. 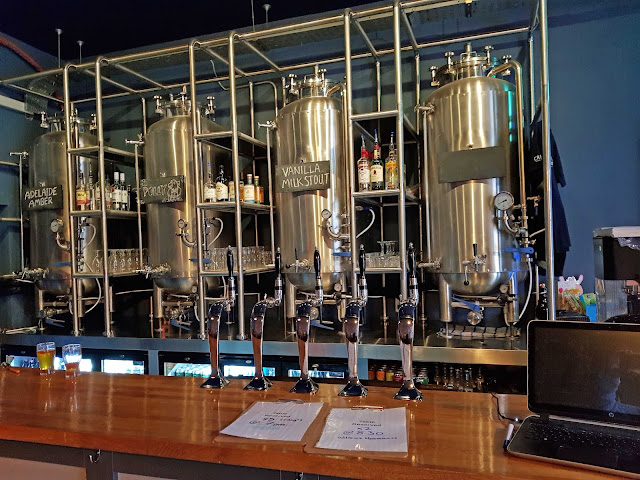 And who are Crew? I’ll let them tell you:

We brew our own beer on site and serve it directly from tanks behind the bar alongside a selection of Irish Beer, Cider and Spirits.

Opened by three friends from Belfast with a love of beer, spirits and independent business with a focus on flavour, community and sustainability. 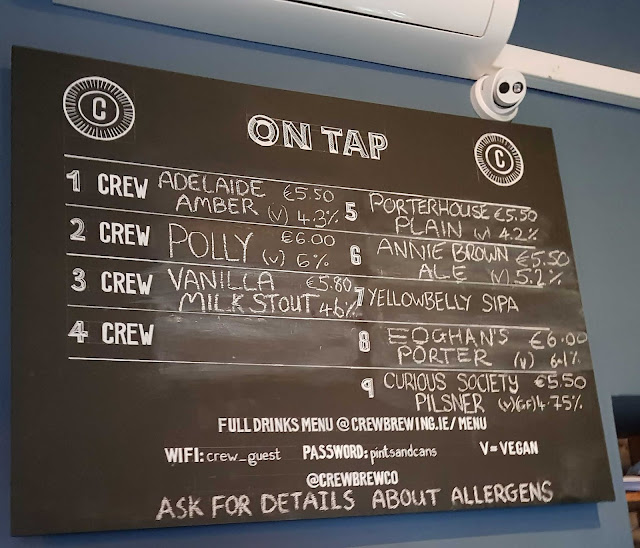