From a Wedding Dress to a Michelin Star. Miyazaki tells the tale at DesignPOP


From a Wedding Dress to a Michelin Star.
Miyazaki tells the tale at DesignPOP 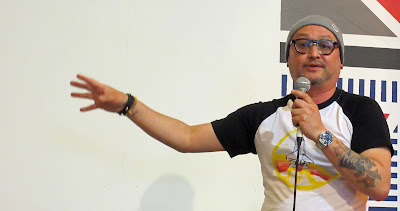 In 2012, a bride to be and her sister visit Cork to shop for a wedding dress. Six years later, her now husband’s restaurant wins a Michelin star in the city.

When Stephanie arrived back in the midlands, she was enthusiastic as she told husband-to-be Takashi: “You have to move to Cork.” So he came down and tried the place for one night. He was converted. “Two weeks later, we moved,” he told the audience at the DesignPOP event in Thompson House in MacCurtain Street last Sunday afternoon. “I was so happy.”

And it got better. But not straight away. Takashi Miyazaki was determined to open a Japanese restaurant to show Irish people what they were missing. But he couldn’t afford a premises until 2015 when he found a tiny place at the junction of Barrack Street and Evergreen Street. It was small, very small. But he thought: “Why not start small? Take the window of opportunity.” And so Miyazaki was born.

He gave it everything. “I had so many different things to show and share. I got great support. Was so busy.” As the tiny takeaway - it has a handful of high stools - prospered, people asked: What next? Are you coming to Dublin? “No, Cork,” I answered.

But he was always dreaming about a high end restaurant. “I had the experience. I had the palate from my grandmother’s food.” And so he went on to learn more and more, to enhance and fine tune what he already had.

He has quite a lot going for him, not least the ability to turn dreams into reality. When he was 18 years old, and a master of Martial Arts,  he started cooking part-time in a local café, “toast, frozen stuff”. Then he did “easy stuff” for friends. They loved it and said “You great chef. Can you cook again?”

He knew he wasn’t a great chef but loved the cooking and wanted to be a chef. His parents were not at all keen on the idea. And they also stopped him following another possible career in the graphic arts. At university he continued to cook for those lucky friends and again he decided on a career as a chef. This time, he was a man and there was no stopping him.
His first job was in a 5-star hotel but he was a slow learner and admitted it wasn’t until he was 32 years old that he felt he had mastered it. The “slow learner” travelled the many Japanese regions and learned lots of different dishes and styles.

Even learned lots of Irish dishes, including fish and chips! Yes, while working in an Irish pub in Hiroshima, a Galway chef showed him the Irish way, including one of the best fish batters ever. While in the pub, he met Stephanie and the road to Cork started. First they moved to Offaly. He missed his Japanese food. The local sushi wasn’t up to scratch and his desire to open a Japanese restaurant was born.

There was an early setback as the restaurant that gave him his first job (in 2008) closed after just four weeks. “I was so upset. I can’t go back to Japan. What can I do?” He had sampled some Irish Japanese restaurants “but that was not Japanese food”. “I have to do something. I was dreaming, dreaming, dreaming!”

And that dream came true in Ichigo Ichie last year. And it wasn’t just his cooking skills that were tested. He brought his artistic skills to bear too in the plating, on the printed menus and indeed on social media.

“I had no idea about Twitter and Instagram. But my wife and friends encouraged me. Instagram gave me the opportunity to show the colour of the food, the real green, the real red.” And so he started painting. And these are the little paintings that you’ll see on the menu cards, including the wine list.

“I am still doing the food I want to do. I keep sketching for my plate. Why not a painting of the dish, so I keep drawing? So happy now, I can design, paint, sketch and cook, all on a plate. It is very unique, all my experiences, my history, my childhood memories.” And his customers are so glad that he decided to share with us.

But what did that Michelin star mean? Someone asked. “It was amazing. My life has changed. Bookings were slow that particular month but once the star was announced we immediately booked out. Still I want to focus on what we do.” He admitted the star was a motivating factor but promised “I won’t change too much.” 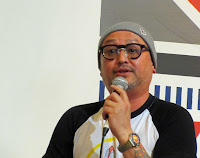 But he will change for the seasons, though he has had trouble with the Irish seasons, especially the short summer. Will he go all vegetarian? “No. The menu is a story over 12 courses. I need fish, I need meat, to make the story.”

It is indeed quite a story and you can catch all 12 chapters in Ichigo Ichie. And if you want a short story, why not pay a visit to the original Miyazaki!