Larkin's Brewery of Wicklow. A Family That Brews Together.


Larkin's Brewery of Wicklow.
A Family That Brews Together. 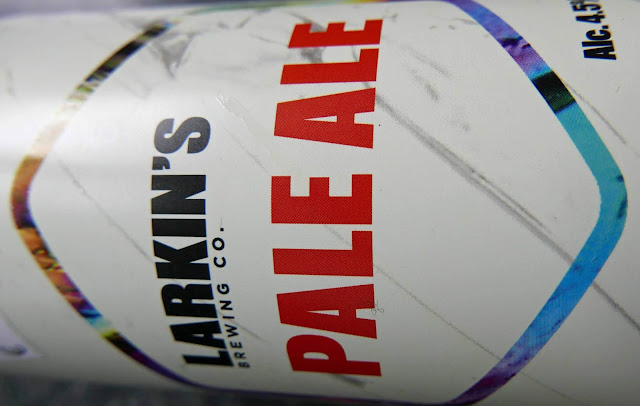 Unusually, for a craft brewery, the main focus in Larkin’s County Wicklow Brewery is on lager. Maybe it is a Wicklow thing as Mont, known for their lager, are also based here.

Just a few years ago, the Larkin family beer enterprise was confined to the domestic kitchen. Decision to “go” in 2015 was backed by the whole family and a year later equipment was ordered. Great feedback at the 2017 Irish Craft Beer Festival saw the Larkins schedule a full launch early this year and now, with a trio of lagers front and centre, they have arrived. 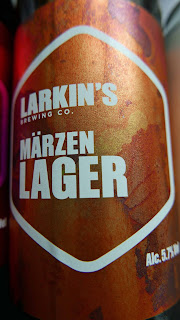 Essentially this is a pretty serious Pale Ale, refreshing, with low to moderate bitterness. Colour is a mid-gold (hazy), white head is long-lasting. Might be of moderate bitterness but the twice used Lemondrop and Cascade hops make their presence felt as this well-made beer heads to a dry finish.

The Märzen style originated in Bavaria. It was brewed in March (hence the name) and served during the Octoberfest. “Dark brown, full bodied and bitter” is the description of the original.

Larkin’s is pretty close to that: malty, good flavour and a clean finish. Colour may not be quite a dark brown, closer to amber. The off-white head, thin to begin with, lasts longer than expected but that’s a minor detail. This is a highly enjoyable lager and well worth a try. 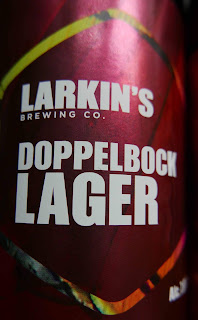 “There’s eating and drinking it” is a Cork saying and it could well be applied to this strong lager. Traditional bock is a sweet, relatively strong beer and the name doppelbock indicates even more strength. It was originally brewed by monks for nourishment during Lenten fasting. Cute boys, those German monks.

The Larkin’s Doppelbock has a dark brown colour with a coffee-cream head that vanishes fairly quickly. It is aromatic, with concentrated sweetish flavours including caramel that disguise the high alcohol. Strong yes but fairly well balanced and with a satisfactory finalé. The Märzen is the easier drink though but if you are fasting, then that Doppelbock’s your only man.

Baltic Porter comes originally from the Baltic states, usually stronger and sweeter. By the way, a lager yeast is normally used and indeed, you read “lager” on the Larkin’s label.

It has, as you'd expect, a black body; also a coffee coloured head that doesn't last long. Toasted coffee and caramel type flavours, a touch of that sweetness too; flavours are concentrated and the finish is soft and pleasant. A rather nice porter but not that easy drinking. Might use it as a warm-up for a stout session!

* They also produce a Helles lager but I didn't get my hands on one - yet!