Clonakilty Street Carnival. The more we pull together, the further we will go.

June 18, 2018
Clonakilty Street Carnival. The more we pull together, the further we will go.


I spotted a demi-sphere in a Clonakilty back-garden last Saturday. It was made of old bicycle wheels. Inside there were a few hens and outside it supported some thriving peas. It struck me later that this kind of inventiveness, this ability to think outside the box and to cherish those who do so, is part of the town’s success.

The motto at Richy’s Restaurant, now celebrating 16 years in the town - Think Global, Eat Local - is another example, another spur to raise the bar. Richy is full of enthusiasm. He doesn’t see barriers, he says. Richy doesn’t hum and haw. “If you want me to cook a meal on top of Carrigfadda Hill, I’ll do it.”

And they do support local here as was underlined the following morning when we sat down to breakfast at Glendine, a lovely B&B run by Mick (Clonmel) and Mari (Youghal) Hanly, both members of the brass band, and involved in the carnival and the town. Local all the way on the plate here. 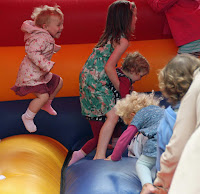 Clon, as it is popularly known, has a string of awards to its credit, including Tidy Town and Entente Florale. It is designated an Irish Heritage town. It is the first official Fair Trade Town in Ireland and, more recently, was named European Town of the Year in 2017, that after a major refurbishment of the main street, the very street in which they hosted, for the third time, an amazing street carnival, the highlight of which was the feeding of about 2,000 people last Saturday. Population of the town is about 4,500.

We got down there early-ish on Saturday morning. Three massive rows of tables were laid out. But they were bare. Not for long though. Soon the organised volunteers appeared. The tables were covered and then pots of wild flowers began to appear. At the entrance to the street, the providers, local restaurants and hotels, were setting up in the covered area. 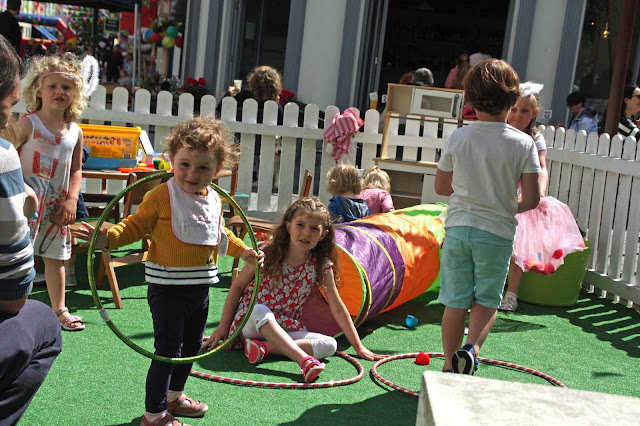 In Clon, there is something for everyone: “Social Together” was the theme for the 2018 festival and that of course meant kids, lots of them. And they had their own long table. And much more besides. 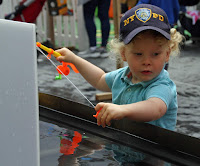 All day long, amidst the colourful ribbons, bubbles and bunting, there was live music, a kids’ zone with supervised bouncy castles, pottery classes, penalty-shootouts, face-painting, magicians, bubbles and popcorn machines, as well as giant games, ping pong, and crazy golf, and an enclosed area for the real smallies. Street performers, with games and costumes, helped the kids enjoy themselves.

Gradually the momentum began to build as the weather held good and the locals and visitors began to arrive in force to enjoy the free entertainment and to make the  theme of “Social Together” a lively fun-filled reality. The more we pull together, the further we will go. 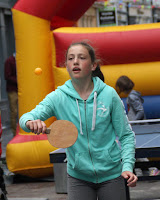 And there was music, lots of it, off all kinds, from jazz to pop groups to their own magnificent Clonakilty Brass Band (founded in 1900). Some played in the Astna Square area near the kids zone while others took to the big stage at the other end of the street. And there were others trying their luck, even a teenage quartet belting out Beatle numbers on a side street. 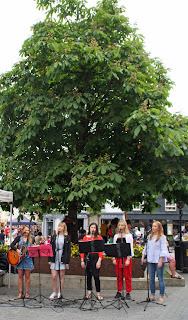 While music in Clonakilty, like life in the town, has many strands, the town credits Noel Redding’s impact on his adopted home as “monumental”. In 1972, Noel, the original bass played with Jimmy Hendrix, moved to Clon and stayed there for the next 27 years. His legacy continues in the venues he performed at, the festivals he helped to inspire and the abundance of musical talent he fostered and attracted to the locality. 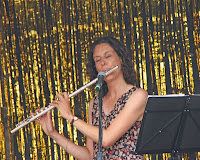 Of course, the main focus in the afternoon would be back at those tables. As three o’clock approached, we joined the queue, a long one but very good humoured. Soon, we were making choices, so many as you can see on the photo of the menu, everything from Quality Hotel’s Falafel and trimmings to Lettercollum’s Paella, from Celtic Ross’s Bacon and Cabbage croquette (very good reports on that one) to Hart’s Cafe’s veggie curry. I enjoyed the Asian style Seafood Noodle salad by Scannell’s while CL’s choice was the Nasi Goren by Richy’s. 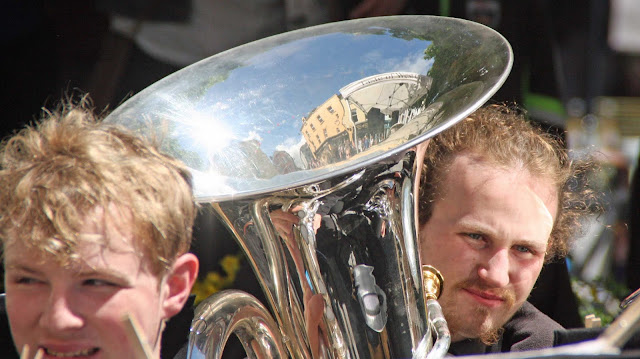 But there was something for everyone. Oh yes and there was dessert also, big pots of stunning fruit yogurt by Irish Yogurts. And a drink? Of course. Plenty of water, wine and a special beer for the day (a good one too!) by the local brewery. All for fifteen euro! The kids meals, by the way, cost seven.

And once we had our meal in hand, the next question was where to sit? But no problem. As we left the serving area, we were met by one of the fantastic volunteers. She had a tray, put our food on it and guided us, chatting and laughing, to seats that we, left to our devices, might have found difficult to spot. So we ate and the music played and the sun shone! Great stuff. 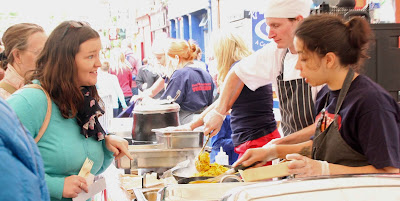 So well done to the committee and the volunteers, people who also had their businesses and shops to run on the day. I met some of them including Kevin O’Regan, Mick Hanley, Michelle Mitton, Trish Kerr, Tim Coffey, Andrew Loane, Chris O’Sullivan, Robert O’Keeffe and Richy Virahsawmy.

If Chris was everywhere music was happening, Richy was everywhere there was food! And he was a happy man as the rush wound down. “Would you find this anywhere else in Ireland?”, he asked. So big congrats to Richy and all his colleagues behind the scenes for another fantastic day in Clonakilty. 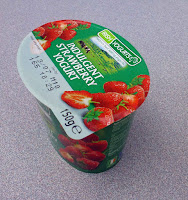 Sponsors too play a major role here and the list is as long as Mick Hanley’s arms (both of them!). This year the Street Carnival committee were delighted to welcome Irish Yogurts as a platinum sponsor. Irish Yogurts is a family run business and was founded in Clonakilty in 1994 by Diarmuid O’Sullivan.