You’ll be well fed at National Stud and Japanese Gardens. Unless Hardy Eustace gets there before you!


You’ll be well fed at National Stud and Japanese Gardens.
Unless Hardy Eustace gets there before you!


You’ll be well fed at National Stud and Japanese Gardens. And, if you find yourself short of sugar cubes, then you can blame Hardy Eustace, one of the stars of a recent visit to the beautifully laid put National Stud. The Japanese Gardens may be a big attraction here but the beauty of the adjoining stud grounds is also hard to match.

Hardy Eustace was described in his highly successful racing career as a hell of a horse and a tenacious battler but the now twenty year old is described as a big baby by Aoife, our fantastic guide, as she feeds him polo mints and those “missing” sugar cubes. Indeed, we all help out, keeping our fingers straight as we make our offerings to the famous gelding. Also keep it relatively quiet, just in case the jealous Hurricane Fly, who shares the field, might hear.

But the geldings are more for show here. The really productive  guys, as you’d expect, are the stallions and soon we are introduced. The star is undoubtedly Invincible Spirit. “He pays my wages,” laughs Aoife as she tells us about the €120,000 fee you have to hand over to have your mare covered by this guy.

As we speak, mares are being driven up. “It’s like McDonald’s here at times,” she jokes. The mares have been medically tested and are also “showered” and fitted with special shoes (in case they kick out when mating). It is not Invincible’s turn today though and he doesn't seem to be too happy about that.

Astrology is a word that crops up a fair bit during the tour, including both at the start and at the end. At the start there is a double sculpture in honour of Colonel William Hall Walker who bought this Tully estate in 1900. He had a fascination for Asia (hence the Japanese gardens) and astrology. He used the stars to determine the future course of his horses - if the star signs were bad at birth, the foal was sold, no matter what the breeding.

Despite much criticism, he went on to be one of the most successful breeders of his time, winning classic after classic. More recently, Sea The Stars was another classic winner and there is a sculpture in his memory, unveiled by the Queen in 2011. It is called Sea of Stars and contains astrological symbolism.

There is a more down to earth souvenir of the great Arkle: his skeleton! There is much more to see here and when your guided tour is over, you are welcome to explore at your leisure.

Most visitors though will end up in the Japanese Gardens at some stage during their visit. It is not the biggest in the world, far from it but, now over a hundred years old, it is still very much worth visiting. Some 120,000 visitors soak up the peace of the gardens every year. They were devised by Colonel Walker and were laid out by Japanese master horticulturist Tassa Eida and his son Minoru between 1906 and 1910. Walker named one of his classic winning horses after Minoru. 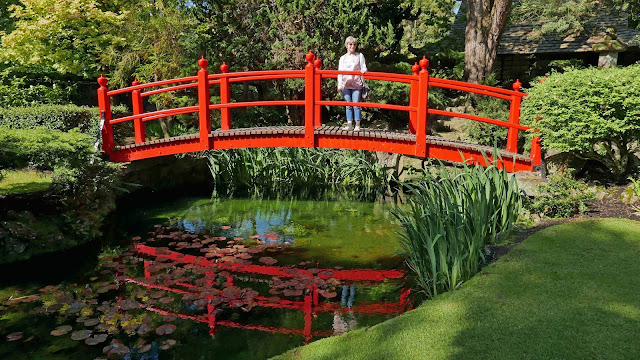 It is not only the stallions that are well looked after here. The in-foal mares, many of them paying guests in their last month, are checked every twenty minutes! NHS please take note.

Some other facts from our guide:
covering dates start on, believe it or not, Valentine’s Day;
gestation period is 11 months;
every single foal is officially born on January 1st;
there is no A1 in the racing industry. That would spoil all the fun;
resident stallion Tommy The Tease checks that each mare is ready but then has to step aside for the big name stallion. Tommy has the consolation of two covers a year, a poor enough return.

After all that walking around, or maybe in between, you’ll need some sustenance and you’ll enjoy some good stuff in the Japanese Gardens Café (it also serves the National Stud - both attractions are on the one ticket and adjoin each other). The café building has Japanese features and has lots of seating.

Ballymaloe-trained Natalie Collins and her manager Ronan Mackey takes pride in offering simple, wholesome food with the emphasis on freshness and flavour. Local ingredients are used wherever possible. The restaurant is open 7 days, 09h00 until 17h00. Lunch served from 12h00 to 16h00 daily.

You may have a hot lunch eg Roast Loin of Pork served with creamy leeks. Or a hot sandwich such as Chicken bacon tomato cheddar & mayonnaise. Maybe all you need is a cuppa and a pastry (of which there’s quite a choice).

We had enjoyed a good breakfast at the nearby Heritage Hotel so didn’t need anything major at lunchtime. We both went for the Chicken Caesar Salad: sliced chicken, bacon lardons, croutons, parmesan cheese, cos lettuce and dressing. Two slices of excellent brown bread were included with this option. We added a couple of local fruit drinks - I got Raspberry and Elderflower - and a pair of delicious Portuguese tarts. Lots of water too as it was a hot day. Ready for road after that!
More photos of the visit here
Also on this visit:
Mikey Ryan's Cashel
Tullamore DEW Whiskey Tasting
More Photos of Visit to National Stud and Japanese Gardens