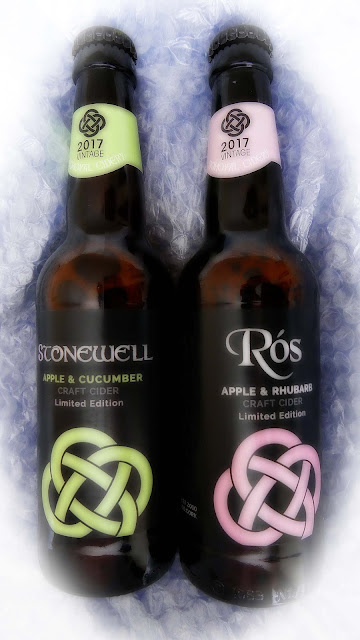 
In 2016, Stonewell won the Supreme Champion Award at the Blas na hEireann Awards in Dingle with their Rós, an apple and rhubarb cider, and their current seasonal is this medium dry Apple and Cucumber.

First thing you notice is the huge difference in colours, the cucumber one looking more like a white wine (with hints of green), though with lots of bubbles. The cucumber comes through, gently, on the nose and on the palate.

Flavours are probably lighter than the Rós but, if anything, are even more refreshing. A light and moreish flavour, as they say themselves, from this combination of Royal Gala apples and a subtle twist of cucumber.

The Supreme Champion is an all local amalgam. The rhubarb juice is extracted from the produce of Robbie Fitzsimmon’s East Ferry Farm in Cork and blended with the “soft caressing” flavours of the apple juice.

This new batch has a gorgeous mid-gold (no pink!), with fountains of bubbles. Rhubarb comes through on the palate but its tartness is more than balanced by those soft caressing flavours of the apples. An engaging mix indeed from the small but highly innovative team at Nohoval and you can taste why it won a surprise overall gold at Blas.

Both ciders are vegan and coeliac friendly and each should go well with food. Thinking of a salad in the garden with a bottle of the Apple and Cucumber while the Rós should be ideal with the strawberries. Must set that one up while the sun is out!