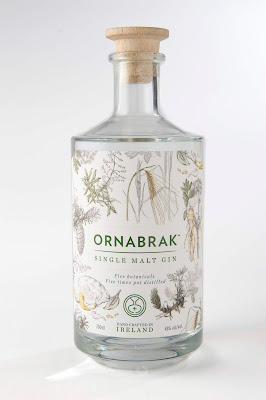 Ornabrak is the name of the new Irish gin launched at Cask on Monday evening by creator Patrick Shelly. The name ‘Ornabrak’ is derived from the Gaelic ‘Eorna Braiche’ meaning Malted Barley. And the malted barley is a major key here.

Patrick, creator of the successful Kalak vodka, admitted to initially being "not keen to do gin", his personal preferences tending towards whiskey or wine. But then he began to think: "What can we do with it? Most gins have a base spirit of 95% alcohol, a highly industrialised one."

Patrick and his company, Origin Spirts, were determined to make their own base spirit and so they turned to Irish malted barley, explaining that Ireland is one of the best places in the world for malted barley. They had followed much the same approach with the Kalak vodka, "bringing bright flavours and terroir. It is now one of top ten vodkas in the world so we must be doing something right."

The gin base of 100% Irish Malted Barley is copper pot distilled no less than four times. Then the botanicals are added and it is distilled again, all at the West Cork Distillery in Skibbereen. "Very few drinks are distilled five times," said Patrick.

"So we had this beautiful base spirit. How do we get botanicals to match? We started with a palate of 30 and gradually narrowed it down to five, chosen to complement rather than overpower." 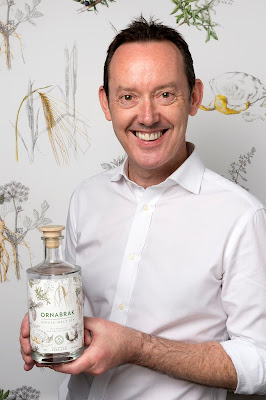 The process was meticulously carried out over 36 distillation trials over 12 months, and with input from some of the world’s best bartenders. And the five selected to create a complex and floral single malt gin were Juniper Berry, Douglas Fir Needles, Garden Angelica Root, Lemon Verbena Leaf and Lemon Peel(a little). The pine needles come from West Cork and are used instead of the more normal coriander.

Now Patrick is happy with his gin:, “Ornabrak is one of very few Single Malt Gin’s being produced around the world and its creation was slightly more complex as we needed the malted barley’s richness and creaminess to shine through, while creating a harmonious balance with the botanicals .

Well that was the talk. Time now to walk the walk. In truth, we had been appreciating the new gin even before the talk, thanks to Andy and his team at Cask. Patrick reminded us that "a lot of our markets like it neat. It’s not G&T everywhere".

I did sample it neat but mostly we were mixing, and mixing with the best, staying Irish as the tonic was the Classic Poachers. Oisin was there on behalf of the County Wexford company who have established themselves as a leading tonic (other mixers too) in a short space of time. "I love your gin,” he said to Patrick. "And have been fortunate to work on your cocktails since you presented your single malt approach to gin and the execution has been excellent."

And I think we all agreed as we enjoyed the smooth and complex flavours, the long and persistent finish. And we weren't quite finished as the Kalak Vodka and the Ornabrack made a joint appearance in a James Bond style Martini. You can make your own Vesper, recipe below. Well worth the effort as it is a stunning combination, just sip and enjoy the aromas and flavours.


An Irish take on the Classic Vesper Martini

Stir with ice and garnish with a lemon peel swirl.


The Bottle
The Ornabrak bottle was inspired by vintage apothecary and perfume bottles, and the label by Victorian botanical illustrations. Each botanical was custom illustrated for Ornabrak by one of Ireland’s leading botanical artists, Lynn Stringer. Lynn is a former gold medal winner at Bloom, has exhibited her works at the Royal Horticultural Society’s Botanical Art show in London and has provided illustrations to the acclaimed Curtis’s Botanical Magazine. Lynn is currently chair of the Irish Society of Botanical Artists


Origin Spirits was founded by Patrick Shelley in 2013 and its has since launched Kalak Single Malt Vodka and Kalak Peat Cask Single Malt Vodka. Ornabrak is the first gin produced by the company. Patrick previously worked in the international luxury goods market, holding senior positions with LVMH (Moët Hennessy Louis Vuitton) in France, UK, Germany, Austria, South East Asia, and Russia where he had the opportunity to represent some of the world’s top wine & spirits brands, such as Hennessy, Moët & Chandon, Dom Pérignon, Veuve Clicquot, Ruinart, Krug, Glenmorangie, Ardbeg and Belvedere.

To Buy
Ornabrak Single Malt Gin (43% alc.) will be available in independent off licences throughout Ireland from 28th May. RSP: ca. 49€.