May 03, 2017
Barolo and Amarone. Two Italians Worth Meeting
A good few years back, a mixed nationality group of tourists, including yours truly, were slowly making our way across Italy. There were a few Australians in the party - they were mainly beer-drinkers (stubbies rather than stickies) but included one winemaker - and their conversation regularly featured the word Barolo. It seemed like a holy grail to them. Later I would find out why! Perhaps they also mentioned Amarone but I can't recall. These two wines from the north of Italy are well worth getting to know!

Nebbiolo is regarded as native to the Piedmont region and produces some of Italy's “most uniquely perfumed and powerful reds”. Since early days, one of those wines, Barolo, was referred to as the “king of wines, the wine of kings”. This La Morra is a right royal example.

It comes from a prestigious and historical cru. The winemaking is “fairly” traditional. The 100 per cent Nebbiolo is aged 18 months in 25 hl Slavonian oak casks (useful for stabilising and harmonising) and then 6 months in steel vats before bottling.

According to Vino Italiano: “…. the top wines in the DOCG are said to hail from the communes of Monteforte d’Alba, Serralunga d’Alba, Castiglione Falletto, Barolo and La Morra.” The hilly land concerned lies generally to the south-west of Alba and much of it is a protected World Heritage site since 2014.

This gorgeous light red wine has aromas of blackberry in Autumn, gentle hints of cherry too, plus floral notes. On the palate it is smooth round and rich, some spice too. Concentrated and elegant, perfumed and powerful. The excellent acidity heralds a long, fresh finish, a finish as satisfying as all that goes before. Very Highly Recommended. 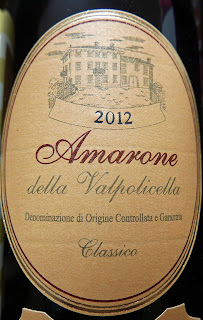 Amarone, some of you will know, is a style, not a grape and the style was developed in the area of Valpolicella where local wine-makers searched for a way to increase the body, complexity and alcohol content of their wines, made generally from Corvina, Rondinella and Molinara fruits. Amarone della Valpolicella is an intensely flavoured dry red wine made from dried grapes.

Righetti may not always feature in the lists of top wine-makers here but his is a good one; you may take a certain confidence from the G in the DOCG. Colour is a deep ruby red. The complex nose features oodles of dried red fruit. It is rich and dry with concentrated flavour - the alcohol is also high; some spice too and a noticeable tartness, all characteristics carried through to the finalé. Very enjoyable wine and Very Highly Recommended.

Fontanafredda. Important Player in Italian Wine
Two Amazing Whites from Italy.
Wines of Italy's Marche
In the Heart of Chianti
From the Islands

Sweet Favourite of the Romans. Still Going Strong.
Montepulciano and Montepulciano confused?
Pinot Grigio, one of the most popular grapes.