Taking the long way round is a regular habit when I'm on the road and so, to get to Westport from Cork, I head to the Galway village of Leenane, at the inland point of Killary Harbour, as I want to drive from there to Louisburgh by the spectacular Doolough route.

By the time we reached Leenane or Leenaune (you will see quite a lot of spelling variations of place-names in both Galway and Mayo), we were feeling peckish. The well-known Blackberry was still closed (at 12.15pm) so, after a stroll, we dropped into the nearby Sheep & Wool Centre for a bite.
And we got a right good one.  They had a Soup and Sandwich offer. For €7.75 we each got a big bowl of soup and a sandwich. And not just your usual veg soup but a Tomato and Roasted Pepper (there was a choice of at least two soups). Great choices (12) also of sandwich fillings and dressings (7).

For instance, I had tuna with salad and pesto on brown bread while Clare had chicken, roasted peppers, red onion marmalade. So they are not dishing out the same old same old. We thought the quality was very good as was the price.
We noticed the Blackberry was open and busy as we walked back to the car, Minutes later, we passed the Carraig Bar, the last pub out of Connemara and then, all of a sudden, we saw the Aasleagh Falls in off the road. Walked in for a view and then drove on.

The beautiful Doolough area was, in 1849, the scene of one of the darkest events of the Famine. On a bitterly cold day, some 600 people in Louisburgh were seeking food or a ticket to the workhouse in Westport. They were told to contact the Poor Law officials who were, for some reason, in Delphi, about ten miles away. Some died overnight and the rest struggled over hills and mountains (no road then). The officials rose from their lunch and told the people they could do nothing for them and ordered them back to Louisburgh. No one knows how many died by the wayside.

Still incredibly sad, after all those years. 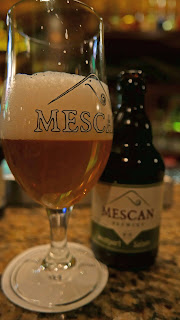 It is of course a short journey by car and soon we were passing through Louisburgh and on our way to Croagh Patrick. We had no intention of going to the top but did get about a third of the way up. It is rough enough with lots of big rocks and smaller loose stones but the views out over Clew Bay are magnificent, even on a cloudy day.

We stayed in the excellent Westport Plaza Hotel that night and enjoyed a lovely meal in their Merlot, a destination restaurant. Visited the bar afterwards. Didn't see any craft beer on tap. But they did have a fridge full of Mescan beer, 330ml bottles of local excellence!
Mescan, by the way, was St Patrick’s brewer and no doubt the odd conversion was facilitated by a jug of his brew. The beer is still cloudy! Their Westport Blonde (5.5%) is superb.

But it was their Westport Saison (6.2%), more cutting, more fizzy, with clove and citrus notes, that I really enjoyed. Saison beer is a Belgian style brewed for seasonal workers. Reckon I'd appreciate one (or two) after a hard day’s labour or even after an idle day.

Day two was mostly an Achill Island affair. The sun came out and the lure of the Atlantic beauty was irresistible. We did the main drive, all the way through to Keem Bay. There were detours, of course. We took the loop to the south on the way out, the one to the north on the way back.

There were many stops to admire the stunning views over the cliffs and the seas, though the first stop was at the Pirate Queen Grace O’Malley castle, near to the lifeboat station.
For lunch, we dropped into the lovely Craft and Coffee shop called the Beehive in Keel. The food was excellent and very well priced (as it had been in Leenane). For just less than twenty euro, we each had a Chicken Bap (with a lovely salad) and tea, all served on beautiful ware by Shannon Bridge Pottery (Offaly).

Just made it back to Westport House about an hour before closing. The house, by the way, now has new local owners who have promised investment and improvements. We had a quick enough look-around upstairs and downstairs. Even visited the dungeon though spent more time in the extensive wine-cellar (now unfortunately empty, aside from a few old wooden markers). 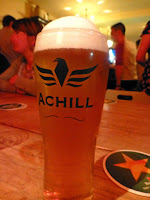 We wouldn't be short of wine though when we visited the excellent Black Truffle Bistro in the town centre for a smashing dinner, a dinner that included one of the best fish dishes I’ve ever eaten.

Time then for another taste of the local brews and we headed up to the lively McGings. I passed the night - we had music by DramaCode later - with Clifford's Connacht Champion, or 3C for short, a refreshing golden ale (4%), one of the beers from the Clew Bay Brewery.


CL settled on a very nice and refreshing Achill beer, made using water from a local corrie lough and Carrigeen moss.

Each beer came in its own proper glass; McGings don't do things by halves. Staff there are brilliant, very helpful if you are not acquainted with the beers (they include Franciscan Well Chieftain Pale Ale in their selection). The perfect end to another good day in Mayo. 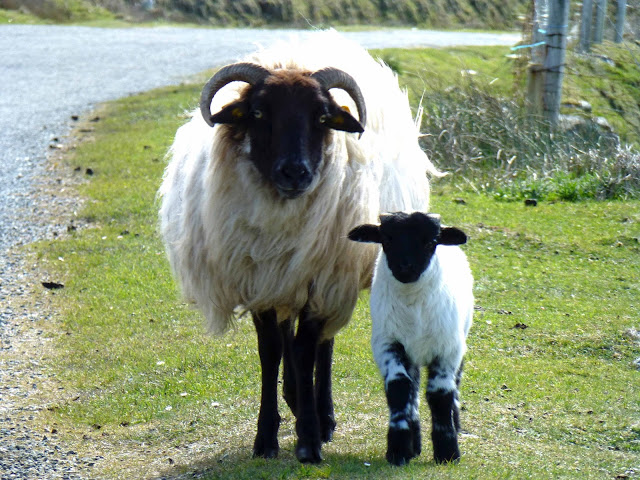