The Mare’s Fart and Dirty Dick. All found in Herbarium

January 11, 2017
The Mare’s Fart and Dirty Dick
All found in Herbarium

Shortly before Christmas I bought the newly published Herbarium by Caz Hildebrand. It covers 100 herbs with text and illustration. The Mare’s Fart and Dirty Dick are among the details 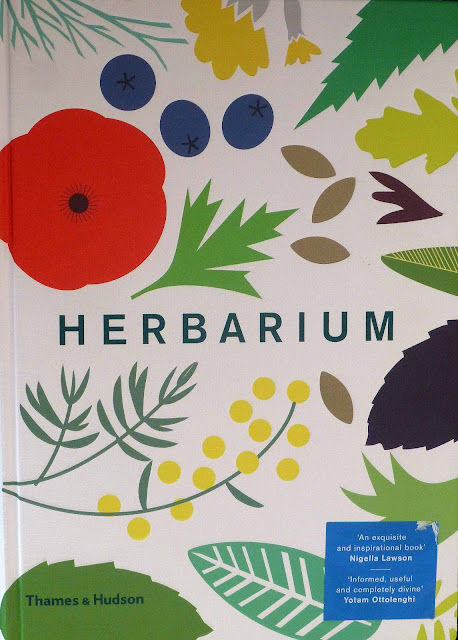 Most of us will know that Pissabed is a common, very common, name for the Dandelion. But it is also called Naked Ladies, Twitch ballock, Hounds-piss, pen-arse, Bum towel and, yes, Mare's Fart.  Its proper name, and this is given for every herb in the book, is Taraxacum species.

And Dirty Dick is one of the names for Fat Hen, also called Lamb’s Quarters, and White Goose. In Latin it is Chenopodium Album and was “the food supplement of primitive peoples”.

Herbs are used in cuisine but also for their curative properties. Got the hiccups? Then get yourself some honeysuckle. A headache? The Meadowsweet is what you need as it contains the key ingredient for aspirin.

And then there’s Alecost, originally very popular in the 16th century and used for flavouring ales and spiced wines. Herb celery is grown for its leaves and speaking of leaves. Ramsoms (Wild Garlic) is a favourite food of brown bears (be careful when foraging!).

It is a fascinating subject, with the odd myth or two. Take Tarragon, for example. If you use it, do so sparingly. Had Catherine of Aragon been less reckless in its use, her marriage to Henry VIII have had endured. At least, that’s the poet Ogden Nash’s version, though perhaps he just needed a word to rhyme with Tarragon! After all, he said “too much Chablis can make you whablis"!

It’s not all fun in Herbarium. Some serious bits. Takes Monkshood for example. This is extremely poisonous, the toxins once used to kill wolves.

And then there’s the Wasabi alarm! It may not wake the dead but, in 2011, a group of chemists won an Ig Nobel Prize for inventing a “wasabi alarm” to wake deaf people, using the herb’s powerful scent!

Each of the 100 herbs in the book has a page of text devoted to it, mostly a general history. Practical information is listed on the side, under four headings: Grow, Eat with, Try, Heal.

For instance (and I’m being very brief here), you are told that dandelion grows freely, Eat them with beetroot, lettuce, bacon…, Try them sautéed as you would spinach, and for Heal, a concoction of dandelion can be helpful for osteoarthritis, acne and psoriasis.

At the back of the book, there is a quick guide with headings such as Wellbeing, Beauty, Symbolism, Flavours, Cocktails (try mint with strawberry, kiwi and rum), Salads, and many more.

Herbarium is colourfully illustrated with each herb having an illustration to itself. The author says herbarium “echoes the history of herbal illustration, but with the intention of taking it forward, achieved by using a contemporary style, inspired by Modernist design, simple geometric forms and vibrant colours. I love the patterns that come through.”

I must say, I love the patterns too. But, beware, while they are gorgeous and striking, they are not necessarily true to life. You’ll definitely need an illustrated growing/foraging guide as well as this lovely and worthwhile book if you are to journey among the herbs.

Herbarium by Caz Hildebrand
Published by Thames and Hudson
RRP £16.95