Thali Nepal Restaurant on the Banks of The Lee

January 08, 2017
Thali Nepal Restaurant on the Banks of The Lee
Once upon a time, you could get beef, predominantly beef, at 30 Pope’s Quay, Cork. Then it was known as Gaucho’s in tribute to South American cowboys. These days, you'll find chicken and lamb here; the new name (since the autumn) is Thali Nepal and the menu features the cuisine of that South Asian country and highlights the vegetables, the spices, the rice and no shortage of meat either. But no beef!

Thali Nepal means platter of Nepal so the menu reflects the country, a crossroads of the area, which borders China (to the north) and India (to the south) and is close to Bhutan and very close (just a few miles) to Bangladesh. Many tribes and cultures, (and consequently cuisines) have met and mingled here.

And the people in Thali are proud to say their menu is genuine: it is "all Nepalese people here", out front and in the kitchen. And we certainly enjoyed our early evening visit last Thursday.

There are Asian favourites on the menu (including Biryani and Chow Mein and Thai Curry) but, helped by Basanta at front of house, we tried to concentrate on the purer Nepalese dishes.

He told us that one of our starters, the Mo Mo, is “an everyday dish” there. We had “five pieces of mouth-watering steamed dumplings, stuffed with minced chicken tossed with ginger garlic paste & served with homemade chutney”. It was indeed delicious, very enjoyable indeed. You may also have this as a main course and you then get 10 pieces.

Newa cuisine is the most celebrated food variety in the country (according to Wikipedia anyhow) and our other starter was called Chicken Newari Sadeko: chicken breast marinated with Himalayan herbs green chilli, red onions, spring onions, ginger, garlic, touch of lime & mustard oil. Served on salad bed. That description is very accurate and we enjoyed (we shared the starters) this light and tangy salad. They also do a lamb version.

I almost forgot! At the start we were served with some flat breads and three lovely dips. One was a yogurt and mint, nice and cool, and the others got progressively hotter! But nothing over the top; all very tasty indeed. And I also tried a Nepalese beer, the Khukuri, nice and smooth from the bottle.

They have quite a list of main courses and again we shared as best we could. One was the traditional Nepalese Thali Set, a meal made of a selection of dishes. Thali simply means a round platter to serve food. Portions included were rice (bhat), lentil soup (daal), vegetable curry (tarkari), Masu (lamb or chicken), Achaar (chutney). Again the details are spot-on and it was absolutely gorgeous and there was plenty of it.

We had the chicken in our Masu as we had ordered lamb for the other mains: Bheda Ko Jhir (Lamb Espetadas). This is Cubed lamb flavoured with mild spices, fresh herbs, chopped peppers, onions skewered & cooked in clay oven with rice or naan. It came out sizzling and smoking.  We opted for the naan, as we had lots of rice with the Set. Basanta was very helpful with these little details and so helped avoid "duplications".


This was a dish and a half. The lamb was tender and full of flavour and the veg was brilliant, the spices mild as indicated.

Delicious and all as the dishes were, it took us a while to polish off the two of them and there was no room for dessert; not even for coffee. And it was a happy couple that headed out onto the quay as the promised rain began to make its presence felt though with just a few soft and isolated drops. It was a mild night in Cork, maybe not as mild under the shadow of Everest. As you probably know, Nepal (capital: Kathmandu) is home to eight of the world’s ten tallest mountains. 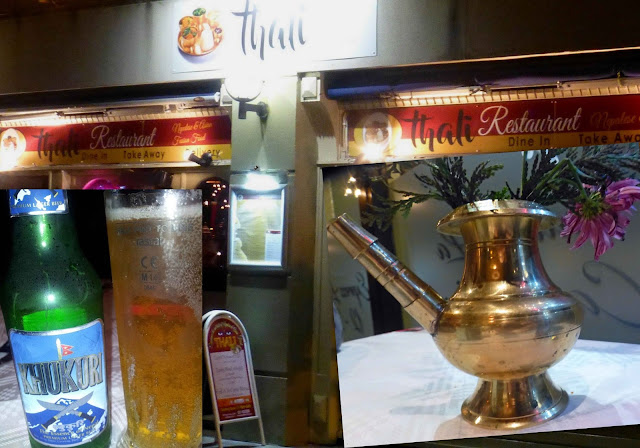