December 06, 2016
New Life For Old Butter Road
Putting North Cork on the Food Map
An old butter road is set to become the centre of a new North Cork food venture. For a year or so now, a small group of people, with support from Taste Cork, have been working on the plan to bring producers and providers from the area together and showcase the result under the Old Butter Road Food Trail.

It will cover a large area, from Macroom to Blarney, from Coolea to Mallow, from Kanturk to Castlelyons. You should be able to get your first taste of the new trail on the May Bank Holiday weekend 2017.

Chairperson of the Old Butter Road Food Trail Maire ní Mhurchu welcomed us to a networking meeting at The Square Table in Blarney earlier this week. “This has been in gestation for the past 12 months. Many have come onboard including producers, butchers, growers, hotels, and restaurants.”

Longueville House, Macroom’s Castle Hotel, Ballyvolane House, McCarthy’s of Kanturk, and Blairs Inn are among those “onboard”. Eventually each participant will be entitled to display a churn at his or her entrance.

The Cronin sisters, Trish and Martina, who own the Square Table, are enthusiastic members of the steering committee. “We can't do good food without producers…there is great produce in North Cork and we are trying to put it on the map. It will be a slow-burner to start with but the knock-on will boost the local profile. And we hope that other restaurants will source local, even in part.”

Maire, who runs the Blarney based Activity Days company, pointed out that there are farmers markets in Mallow, Fermoy and Macroom but they are not so well known.  She and the other members of the steering group, including the Blair brothers from Blairs Inn, are determined to put the region firmly on the map.

And when you've eaten, you’ll have no shortage of attractions to choose from in the area. The list, from the lovely Lee to the majestic Blackwater and beyond, includes Blarney Castle, Doneraile Park, Millstreet Country Park, Mallow Castle, and The Gearagh in Macroom.

From the late 18th century, for many decades, Cork was the centre of the world butter trade. Supplies came to the Butter Exchange in Shandon in the city by a network of butter roads. 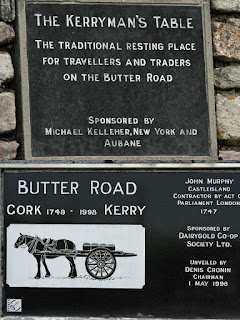 Perhaps the most famous is that from Castleisland in North Kerry to Cork, via Millstreet. East of Millstreet and west of Rylane, in a small place called Aubane, you’ll find a couple of roadside plaques (right) remembering the heyday of the road.

And here too you’ll see the Kerryman’s Table, a large slab of rock, where the travellers stopped for refreshment and no doubt to exchange gossip.

And possibly to check their pocket-watches! When a supplier reached Shandon, he would ‘bring home the time' by adjusting his pocket watch at the clock tower.

Did he not know that the clock, with its four faces, one on each wall of the tower, was and is known as the four-faced liar? Read the full article on the butter road, by Jo Kerrigan, here.

The old road was busy then, a hive of activity. And the meeting in Blarney gave every indication of making it, and the surrounding roads, every bit as busy again, feeding all the hungry travellers. Maybe, come May, there’ll be a bite or two out on the Kerryman’s Table! And if you don’t know the time, just check your mobile!

Before the meeting, the Cronins illustrated just what they were taking about with an amazing spread of tasty bites (more than enough to cover the Kerryman’s Table), all made from local produce.

Unknown said…
I remember stopping at the Kerryman's Tabel on a few occasions, when out driving with my parents in the early 60's. Great to see this area being given more attention.