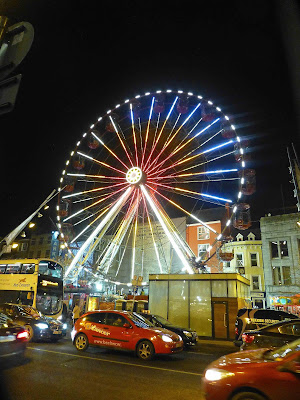 The Sultan  is beaming. A big welcome for customers and passerbys alike. He and his team are enjoying the atmosphere under the Big Wheel, the eye-catching feature of the Cork Glow Festival, on every weekend (Friday to Sunday) until December 18th.

We go for the Lamb and the Chicken and take them, along with a glass of his excellent mulled wine, to one of the nearby tables. Hard to find a space even though it is early in the evening. But we sit, eat and have a chat with fellow diners. Nice bit of grub and good value too at €6.50 each.

There are quite a few others stalls around, including Wok ’n Roll, Flynn’s Gourmet Sausages, Crepe Man, Fish ’n Chips, Bad Boys BBQ, Taste Cork (with local producers) and more. All doing business. Queues are building for the food and especially for that Big Wheel. Families are wandering in and out of the small park where Narnia is the theme this Christmas. 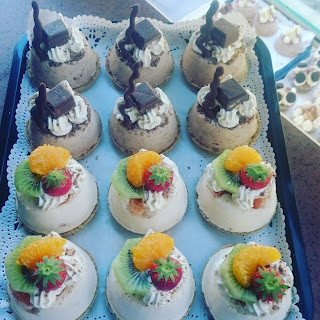 Something sweet? We had already tasted a small sample from Charly’s Cheesecake . So he was the choice for “dessert”. Chocolate? He had a half dozen different types of chocolate cakes and lots of fruit ones too. We took the Toblerone and the Terry’s Orange. Nice stuff!

Time then for a stroll up the Parade and up North Main Street where Mick O’Connell MW of the WineMason  was holding a tasting.

He had a couple of comparisons for us. One featured Tempranillo. The first was a light and fruity unoaked organic, Merinos 2015, from la Mancha. The other was Finca Emperatriz 2012 Crianza from Rioja. This, with oak, was the more familiar style. Both were good, maybe for different occasions, the organic more for summer perhaps, the Rioja for now!

And then we tasted two Niepoort Ports, one a tawny, the other an LBV 2012. These divided opinions with some preferring the tawny while others (including myself) plumped for the LBV. The tawny was introduced just for comparison; Bradley's don’t stock it but they do sell the other.

But, for me, the best came first. I really enjoyed the two whites. Riesling is a favourite of mine, especially European Riesling, and the Wagner Stempel, dry with ripe fruit and sharp acidity,  certainly fitted the bill. Not too often you come across Roussane and Marsanne, other white grapes that I like, in the one bottle but that is exactly what the Turner Pageot 2015 blend, fruity and medium dry, provided.

It was a lovely “excursion” downtown and highly recommended. Not too sure where there’s a tasting of wines or beer next weekend. But if you do venture to Glow and are looking for something else to do, either before or after, why not check out the many choices detailed in the December edition of Whazon Cork! Enjoy.
Bradley's Charly's Cheesecake Glow The Sultan Whazon WineMason