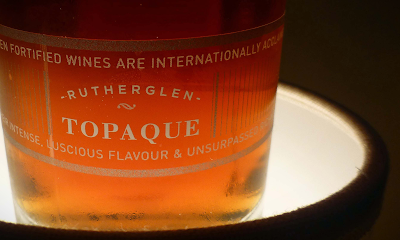 I wouldn't dream of disagreeing with this statement on the front label. These gorgeous wines though did have their problems and had to endure a name change when the Hungarians objected to the Australians using the Tokay name.

Sweet and silky, yet with a light feel to the texture, this golden vibrant Muscadelle is really quite superb. “This is 100% Muscadelle. No Botrytis here but it is well ripened. There is plenty of accumulated sugar but we don't lose the fruit,”  said Chris Pfeiffer when he introduced the wine here in Cork a few years ago.

James Halliday's Wine Atlas says these fortified wines are "absolutely unique; nowhere else in the world is an aged, fortified wine produced as this is from the Muscadelle grape." Grapes & Wines says the grape "reaches its apogee" in Rutherglen and is "less fleshy and syrupy" than Muscat.

Dessert wines are collectively known as stickies in Australia and you can see one of the reasons why on your glass: just note how long those legs take to slide down. But there is a beautiful lightness on the palate and finish. Silky and luscious yes, lovely aromas of honey and apricots too, yet the overall effect is a non-cloying sweetness. A delight and Very Highly Recommended.

The Rutherglen Topaques are classified under four descriptions which mark a progression in richness, complexity and intensity of flavour: Topaque, Classic Topaque, Grand Topaque, and Rare Topaque.

Never got to taste the Rare but, thanks to Chris Pfeiffer’s visit, did have the privilege a few years back of tasting the Grand. This expensive wine is not available in Ireland so I made the most of our taster, taking it tiny sip by tiny sip. It was twenty years old and had spent most of that time in barrel. Producer Chris said: “It is a very special occasion wine (like old Cognac). It is very complex and you don't need much.”

Might not be able to get the top ones here (the Rare is four years older than the Grand)  but the gorgeous Rutherglen Topaque, a delicious first step on the ladder, will do for now!

Pair with honeycomb ice cream, fruit based desserts, soft cheeses, chilled as an aperitif or as an after dinner drink with coffee. These suggestions came from a producer. We enjoyed it as aperitif and disgestif, also with St Tola Goats Cheese (Ash) and a Chocolate Biscuit Cake.
Australia dessert Karwig Rutherglen sweet topaque Wine