California Wines at Ballymaloe. Variety Under The Sun

March 13, 2016
California Wines at Ballymaloe
Variety Under The Sun 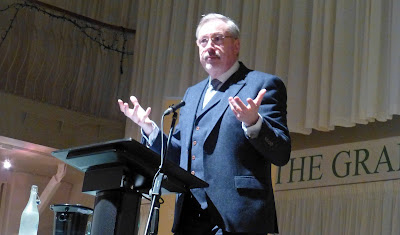 No less than eight grape varieties featured as Liam Campbell, in association with Wines of California, presented a very interesting and high quality tasting at the Grainstore in Ballymaloe last Wednesday.

The big “spread” was no accident as Liam deliberately chose to show that the Sunshine State can grow any variety under the sun. “No matter what variety, you can be sure that someone in California is experimenting with it.” 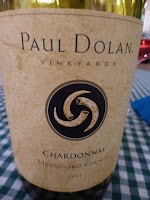 When you think of California, you bring up some lovely images: “Tee-shorts, shorts, flip-flops, beach, laid-back, easy-going. And the producers embrace that friendly attitude and praise one another’s wine.”


He started the whites with Paul Dolan’s 2012 organic Chardonnay from Mendocino. Classic Drinks are the importers and rrp is €26.99. The Dolan family has a Waterford connection. This “is totally dry but fruity with medium acidity”. It is full-bodied, with a persistent finish. Dolan is a leading proponent of biodynamic and organic grape farming, according to Wines of California (2014). This was my favourite of the three whites.

The Benziger 2012 Sauvignon blanc, imported by Febvre (rrp €24.99), “has quite a European accent”, according to Liam. “Great acidity with lemon, lime and apple characteristics, a very versatile food wine”. It certainly went well with the St Tola Ash Goat Cheese. 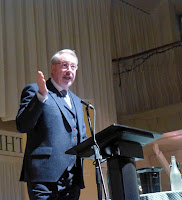 Benziger, not to be confused with the Beringers, are another vineyard that use natural farming methods and to quote from Wines of California: “The rolling hills of their Glen Ellen estate are home...to..sheep, cattle, and a host of bugs and birds that keep the vineyard in balance."

In between the whites and the reds, Liam spoke about the Morgan Bay 2014 Zinfandel Rose that we had started with as we took our seats in the grainstore. At 10% abv it is a light drink, also a little bit sweet. “But like Blue Nun, it gets people into wine; it is fresh and fruity and a great cheese partner.” Now it was time “to move on to the dark side”. 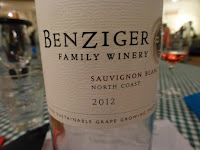 The reds started with a Pinot Noir, the La Crema (Monterey) 2012, imported by Celtic Whiskey & Wines with an rrp of €31.99. Liam praised it for its high acidity, a great summer wine, versatile and very good with food, not just red meats but may be served cool with poultry, fish and so on. Again, the vineyard is sustainably farmed.

Wines are produced in four quality levels. We had an excellent example in Ballymaloe but apparently the Point Noir to watch out for is the third tier Russian River Valley 2011 from the Appellation series.

Liam continued his exploration of the many varieties when he next introduced the Barbera 2010 from Montevino (Spanish for mountain wine). “It has  a gentle ruby colour, looks very young for a 2010, plummy aromas now..mouth-watering, gentle tannins, high acidity that cuts the fat in your chorizo!” Sure did. It is imported by Findlaters and rrp is €14.50. 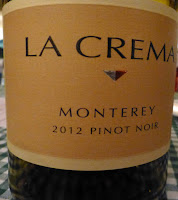 Wouldn't be a Californian tasting without a good red Zinfandel and our example was a Bonterra 2013, with a big abv of 15%, imported by Richmond Market, rrp €18.00. This has a pale-ish ruby colour with black fruits and gentle tannins and was a perfect match with that delicious Mossfield cheese. Bonterra, well known for their Merlot, are the leading producer of organic wines in California.

The Delicato Vineyards are one of the leading family vineyards in the US and produce under a variety of labels including Gnarly Head that you will see in Ireland. We enjoyed their First Press 2010 Cabernet Sauvignon, imported by Cassidy Wines and with an rrp of €26.99 .This is ageing well, “a perfect ruby to the edge” and went down well. Liam’s tip here was to decant! 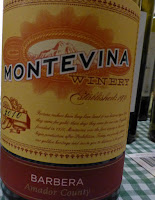 We finished on a high note with a Syrah, the Tepusquet 2013 from Cambria. You'll find it in O'Brien’s at €24.99. The Tepusquet vineyard has been replanted over the past 20 years. Liam: “The nose is subdued but there is a deep mine of flavour, black fruit characteristics and great acidity. Great with steak… but try it with fried calamari! The temptation is to use it now but it will age well.”

It was quite a tasting with nine wines in all. Thanks to Liam, Justine Adams from Wines of California and to Colm McCan of Ballymaloe. Thanks too to Ballymaloe for their terrific matching bites all through.

Some very recent post on California and its wines.
1 - California Trio. Zin, Zin and PN.
2 -Wines from California. Serious. Cheeky and Over Here 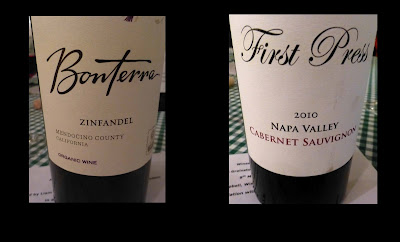 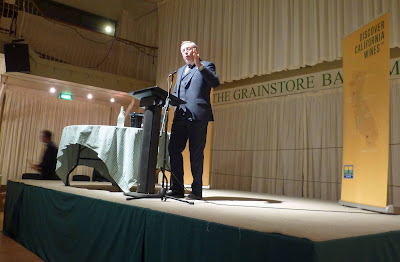