May 20, 2015
Jancis Robinson and New World’s New Wave
Wine on the Move, Fresher and Lighter

The Drinks Theatre at Ballymaloe’s annual LitFest was packed for Saturday’s talk and tasting by Jancis Robinson. The Master of Wine’s talk was entitled Wine’s New Wave - Lighter and Fresher. Jancis, quite deliberately, had chosen mainly New World wines and those from areas that were previously best known for “monster wines”, those big in fruit and alcohol! It was acknowledged that parts of the Old World had been producing this lighter style for quite a while.

Ballymaloe’s Colm McCan welcomed Jancis and she replied saying she was very comfortable, really at home, in the converted tractor shed as she was brought up in a small village herself.

Over recent years, while doing research for her various books, she received reports from all over the world, “from people with their fingers on the pulse”, of a trend towards lighter fresher wines.

The move is to make wines “that express the vineyard”, in a trend towards “single vineyard, even small plot, wines”. The first wine was a Californian Chardonnay 2012, from Sandhi in the new appellation of Santa Rita Hills. This comes from a high-ish site, 200-500 feet. ‘It is almost Chablis like in its acidity,” she said. “But the aim here is for balance.” It was a good start. 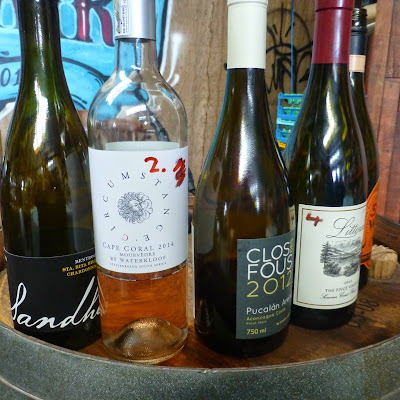 Next stop was Stellenbosch, South Africa and a Mourvedre Rosé, Cape Coral 2014. “Not for keeping,” she warned! This lovely pale salmon pink is soft and gentle, bone dry and low in acidity. “Good for food, especially aioli.”

The winemaker here, she told us, has had Southern Rhone experience and uses biodynamic viticulture. "Sounds potty but it seems to produce the goods. The vines look healthier and the soil is also healthy. People all over the world are much more interested in local vines, recuperating older ones”. In response to a question by beer ace Garrett Oliver, Jancis said that all the interesting wine in the world is craft wine.

On then to a couple of Pinot Noirs, the first a Chilean 2012, the Clos Fous by Pucalan, weighing in at 14.5%. Not quite light maybe but beautifully balanced, lovely texture and “satin smoothness, right amount of acidity. A complete steal at ten pounds!”. The vineyard is north of Santiago and “very influenced by the cool ocean”.

The Sonoma County Littorai 2012 will cost you about seven times as much. “This is biodynamic and has the hallmarks of freshness and acidity and this was a very good vintage after the disaster of 2011. More complex, more Burgundian and its lovely texture caresses the palate - think I'll swallow that!” I think we all followed suit. 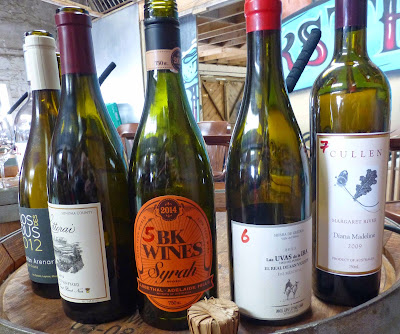 Now let us hop over to Australia and the BK Wines Syrah 2014 from the Adelaide Hills, “a wine of recreation, rather than contemplation” and chosen more “as an interesting example rather than a fine wine. This is the type served up by the bucket in wine bars.”

Okay then. There would be a good Australian to finish on but first the one nod to the old world: a 2013 Garnacha from a high altitude (550-650 metres)  in Mentrida. “This is a new style in Spain, made from up to fifty year old vines. You can smell the sweetness of the Garnacha plus you have masses of natural acidity and a fresh stoniness”.

Many of us here in Ireland appreciate the excellent wines made by Cullen in Margaret River in Western Australia and Jancis produced a winner to finish on: the Diana Madeline 2009, a Bordeaux blend (including 88% Cabernet Sauvignon). “The Cullens were early adopters of bio-dynamic in Australia and this is an Australian classic, the best balanced Bordeaux out of Australia. It is very fragrant, you have that savoury note at the end, a wine of real quality.”

So now you know. If that new wave washes you up on the beautiful beaches of the Margaret River, just head to over to the Cullens. Then again, it might be easier just to check where Liberty Wines distribute them here.