Garrett Oliver, dapper brewmaster at the Brooklyn Brewery, started his Ballymaloe talk and tasting, with this line on tomatoes. Soon, he would delve into bread and cheese, fake bread and fake cheese, and later he would go all philosophical or maybe philological as he explained his theory of pre-sadness!

But there was no sadness in the Drinks Theatre during Garrett’s hour on Sunday afternoon. Just lots of laughs and no shortage of good beer either, beer that tastes like beer!  You hear people say, when they taste a craft beer: This is nice, doesn't taste like beer. He had an explanation: “The beer they grew up with didn't taste like real beer!”

Garrett, no mean chef himself, says that “brewing is more like cooking than wine-making”. He went on to give us a bit of background on New York’s diverse food and drink scene; in the late 1800s, you could eat your way around the world in one day there. He revealed that Guinness had a brewery on Long Island in the 1940s that lasted for ten years or so but closed because people preferred Guinness from Ireland.

Back then to the theme of real food and real beer. “It was a different world after prohibition. Better transport, the mass market and advertising led to less choice. The number of breweries in the US went from 4000 to 40, all making much the same beer.”

He highlighted bread as another example. You had fake bread, cheese with yellow colouring. A cheese sandwich consisted of two wraps of “plastic” and a filling of yellow plastic. “Same thing happened with beer.”
As he introduced the first beer, Brooklyn’s Sorachi Ace, he revealed that his first pint of real British Ale “changed my life”. The Sorachi comes in what looks like a champagne bottle but Garrett wasn't having any of it saying Champagne comes in a beer bottle. No arguing with that, dude!

The Sorachi is based upon a Belgian Saison and that “dill like aroma is unusual”. “It is a super dry beer, slightly hazy and you may find yeast at the bottom. It is very nice with oysters, crabs and other shellfish.”

And then he brought up the pre-sadness. You might, for instance have pre-sadness as your enter the last few days of your holidays in an exotic place, still enjoying yourself but knowing the end is nigh.

The Sorachi was one of their 2009 specials and, like holidays, specials are not meant to last beyond their designated span. So as the Sorachi’s allotted time came to end, the pre-sadness entered their minds even though they were happy drinking it at the same time. So they didn't allow it to end, found excuse after excuse to keep it going and now make it all the time.
Next up was the Hammarby Syndrome, introduced to celebrate their opening of a brewery in Stockholm. It’s brewed from 35% of spelt, an ancient wheat-like grain that was once a mainstay of Scandinavian beers and this gives it a nutty flavour. He recommended it as a food beer, especially with roasts and steaks.

Time for the third beer, the Ghost Bottle Galahad based on their Brooklyn Local No. 1 and made “within the Belgian tradition”. This has been enhanced via the lees from a natural cider fermentation.”It is aged for one year on the lees and has lots of flavour that were not in the original, is cloudy and very dry though it seems sweet.”

Brooklyn is well known for its collaborations. “We were the first brewery to do collaborations but now we were doing it only with friends. Great to bounce around ideas.” We were now sipping his Wild Horse, a stout with quite a kick at 9.4%. He then told us the yeast was the famous, infamous if you’re a winemaker, Brettanomyces, Brett for short.

“Brett was the flavour of stout, back in the day.” You might spot the hay, the farmyard, the horse-sweat. Can't say I did even though the dogs were barking outside in the Ballymaloe farmyard and there were hungry sounds from a bird-nest or two high in the rafters. After all, this Drinks Theatre is in a tractor shed! More on the Wild Horse here.

The journey continued with K Is For Kriek. “This is the least beer-like beer. Kriek is the Belgian tradition of adding fruit. This was food back in the day. This though is a weirdo variation, no Belgian would recognise it as Kriek. We put ten kilos of cherries into each barrel.” 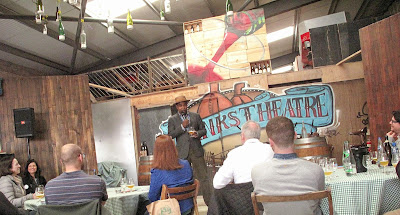 “This was brewed in 2013, spent five months in barrel and overall took one and a half years to make. It is 10.3%. Pair it with duck, goose, foie gras. This is an American interpretation of wheat, illustrates that what we do is something like a chef does when he imports an idea from another country.” 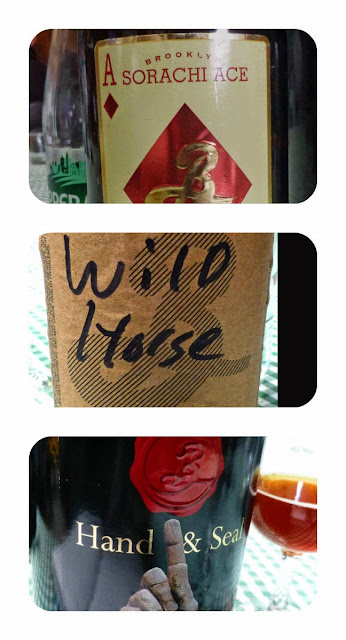 And speaking of ideas, he said nobody ever came up with a great idea over a Diet Coke. “The best ideas need a real drink. They say you live longer if you don't drink. Not really. It just seems longer!” Check the brewery’s notes on the big K here.

ABV has been rising all the time and the final beer packs 13.5%. Hand and Seal is a Barley-wine style, “..nice with Stilton, very strong and sweet, well balanced and will age - for up to forty years!” Once the preserve of nobles, the Brooklyn brewmaster decided it should be for the masses. Read the full story here.

If that was the last of the beers, it was not the last of the session, not with Garrett on the mike. “What we do is creative. This is a renaissance, a recovery from a harmful food system that wiped everything out. Go out and try things. Some of these beers cost less than a coffee.” He must have stayed in the Westbury recently; an Americano cost me €5.40 there last week.

“It is great that you in Ireland now have a burgeoning craft beer movement and your first pint should be from a local brewer. But I would like to be second on the list! As far as I know, you go around once - I’m going to have a good time!”