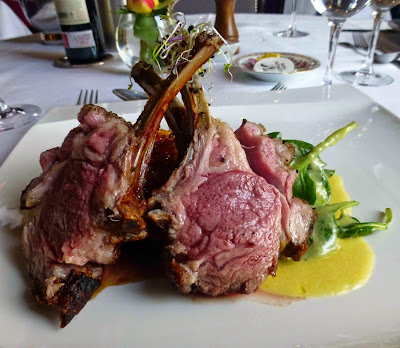 At dinner in Blairscove House in Durrus, you are very likely to meet owners the De Mey family: parents Philippe and Sabine De Mey along with daughter Ann and husband Chris Woodward. Head Chef Ronald Klotzer is Sabine’s brother.

The friendly family do most of the serving themselves, starting in the well stocked bar. This has beers on draught along with craft beer in bottle and virtually every spirit you can think of. There is a long and very interesting wine list and they also take pride in their cocktails.

Our apartment was overhead, so this was probably the shortest walk I ever made to a restaurant, though there was a pause on the stairs to take in the stunning sunset views over Dunmanus Bay.

Hadn't tried the Mountain Man’s Sneaky Owl beer previously so I was quite happy to take up the suggestion and happier again as I sipped the dark liquid. CL got quite a surprise when her Woodward Rose cocktail arrived in a teapot. During the days of prohibition in the US, people took all kinds of measure to disguise their alcohol, hence the teapot.

Quite a few of the wines are available by the glass and also some by the half bottle. We went half and half as our main courses were so different. I must say I was very happy with the El Coto Rioja Crianza (2010) but that was as nothing compared to CL's enthusiasm for the Rochebin Macon Lugny Chardonnay (2012). 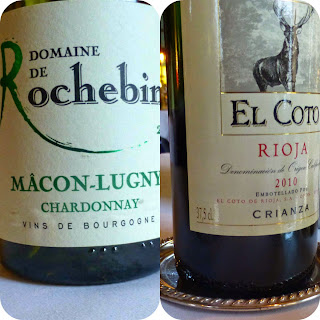 I had to check that out and indeed, through a series of hard-won sips, found it was an gem from the home of the grape, an organic one at that. Nose is intense, it is balanced and fine on the palate, refreshing at all stages, especially in the finish.

The restaurant is located in a former barn. It is high, like a church, and the tall windows overlooking Dunmanus Bay were recesses through which the hay was pushed down to the animals from the loft above. Now, the loft is removed and they feed the hungry humans there in five star comfort. And they don’t throw it in through the windows!
There is a staggering array of starter options, decoratively displayed on a table, and you get all the help and information you need to make your choices. Basically, aside from the unusual smoked egg (one of the breads was smoked sourdough), I went fishy: a few oysters, cooked salmon and some salmon gravadlax. You could be tempted to overdo it here but restrain yourself, there is so much more to come. CL’s choices included curried quinoa with raisins and pomegranate seeds and the same salmon dishes as mine.

My main course, and there is an excellent choice (with a couple of specials thrown in), was the Grilled Rack of West Cork Lamb with Aubergine cheesecake and wilted spinach, served with the lamb jus and garlic cream.The presentation was deceptively simple, understating the pleasure ahead. The soft fat quivered like jelly. The blushing meat (no less tender) opened easily to the probing of the knife. Add in the accompaniments and I had paradise on the palate.


What a splendid line-up CL had on her plate: Poached Breast of Guinea Fowl, tea soaked prunes and Savoy cabbage, Jerusalem artichoke purée and smoked bacon emulsion. Again the presentation was simple but it was flawlessly cooked and bite after bite of exquisite delight. Just to mention, the potato and vegetable sides were also spot-on.

Desserts (and cheese, including the local Durrus) are displayed on the Grand Piano. You are given a good sized plate before you are guided through the stunning selection of cakes and pots and other enticing options. I’m sure they are all gorgeous but I enjoyed my selection, especially the Tiramisu while CL, who likes her citrus, thoroughly enjoyed her Orange Cake and Lemon Tart.

So then we sipped our coffee from an elegant pot before making our way back up the steps outside to our apartment. Convenient or what?

See also: Walking on the Sheep's Head Peninsula
Taste of the Week. Cocktail in a Tea Pot
Castlefreke and Rathbarry, The Castles And The Wood